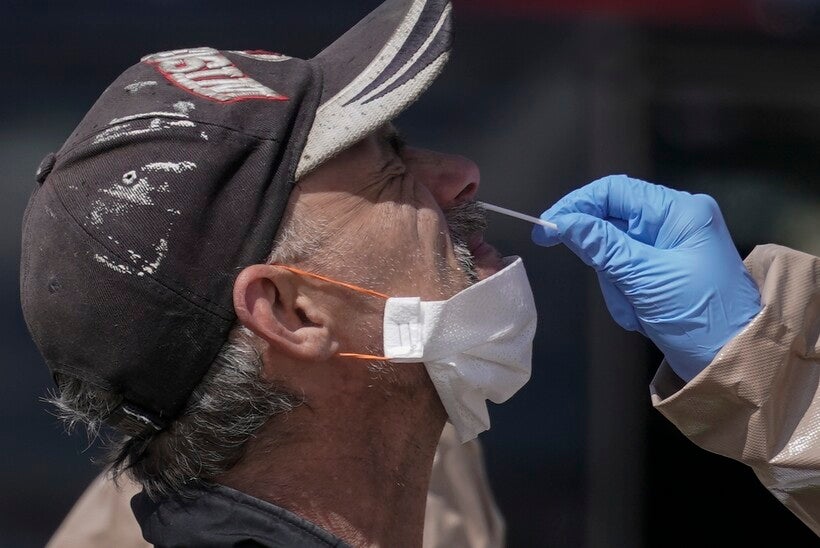 One of the most sparsely populated counties in Wisconsin now has the state's highest rate of active COVID-19 infections.

The steep infection curve in far-northern Iron County in July follows four months when the county's total number of infections was in the single digits. Health officials say the outbreak isn't tied to any single event or institution. Rather, one public health official said it appears to be the result of "quarantine fatigue" that led people to cast aside social distancing practices for graduation parties, Fourth of July gatherings and other social events where the disease spread.

As case counts increase in much of Wisconsin, the rural area is one of several places in the state to have seen a spike in new cases in recent weeks. It also exemplifies the disease's continuing spread from Wisconsin's urban centers into areas that previously had seen only minimal activity.

Zona Wick, the former county health officer who has been rehired as a public health nurse during the crisis, said the county's low numbers throughout the first months of the crisis meant some residents became complacent about the risks.

"They said, 'We're rural, our numbers are very low, so we're safe to have gatherings here in our community,'" Wick said.

There have now been 75 positive cases in the county — 68 among residents and seven among nonresidents, who may include those with seasonal properties there. Thirty-eight people have recovered; three have been hospitalized; one has died. Wick said cases are distributed across the county and not tied to a particular cluster. For example, the county's nursing homes have had no cases.

In absolute terms, there are plenty of places in Wisconsin with more cases and more deaths. But for a county of 5,676 residents, the spike means Iron County's per capita rate of active cases now is higher than in any of the state's urban centers. That's in part because the great majority of cases recorded in initially hard-hit places like Milwaukee, Racine and Brown counties have now recovered, leaving them with a much smaller proportion of active cases compared to their cumulative totals.

In new data published by the state Department of Health Services on Wednesday, only four of Wisconsin’s 72 counties showed more active cases than recovered ones: Iron, Juneau, Langlade and Menominee counties. Two others, Taylor and Washburn counties, had the same number of active and recovered cases. All six are rural counties.

They aren't the only places in Wisconsin to see a recent spike in new cases. On Wednesday, Trempealeau County public health nurse Kaila Baer said in a statement that the western Wisconsin county was "on the edge of moving to severe risk." It had the seventh-highest case rate in Wisconsin per 100,000 people, according to Baer.

Meanwhile, Chippewa County saw COVID-19 cases double in the last three weeks, according to a report from WQOW.

There is no hospital in Iron County, and Wick said residents have traveled to Minocqua, Ashland or Ironwood, Michigan for tests. Because of an increase in new cases, the Health Department requested a National Guard-assisted testing event held in Hurley on July 24. Not all results from that event have yet been returned.

"Our numbers stayed low for March, April, May and June," Wick said. "For four months, our numbers didn’t go above 10.

"Quarantine fatigue is a real thing," she said. Those low numbers "lulled people into complacency, into saying, 'Hey, things are safe here. It's just our family. It's just our friends. It's just people we know.' … And the virus doesn’t care."