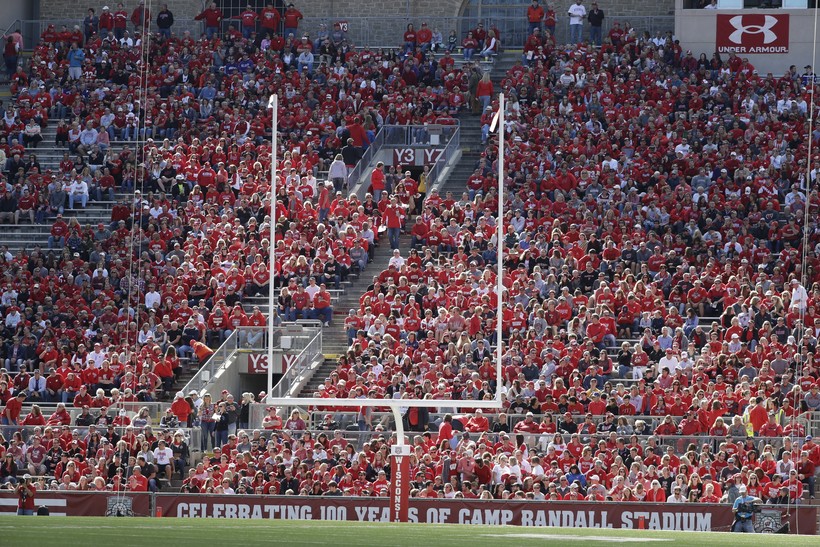 Camp Randall Stadium is seen during the first half of an NCAA college football game between Wisconsin and Northwestern Saturday, Sept. 30, 2017, in Madison, Wis. Morry Gash/AP Photo

As Wisconsin experiences a surge in COVID-19 cases and hospitalizations, football fans will have to wait to watch any Wisconsin Badgers or Green Bay Packers games in person.

For Badgers games, the University of Wisconsin-Madison initially planned to allow about 1,500 people to attend games, mostly the families of players and staff. But Chancellor Rebecca Blank announced Wednesday that plans have changed.

Only essential personnel will be allowed in Camp Randall Stadium when the Badgers kick off against the University of Illinois later this month, due to the growing number of coronavirus cases and hospitalizations across the state.

"We're asking fans in Madison to follow public health guidelines and avoid gatherings with anyone outside their household," Blank said in a statement. "We're asking our fans around the state to watch the games at home."

Tailgating, loitering and open containers won’t be allowed on game day, according to a news release from the university. Campus parking lots will be closed to everyone except UW-Madison employees using them for work purposes.

"It's unfortunate that circumstances will no longer allow us to invite families to attend, but we support this decision and know that the safety of our students, staff and community has to be our top priority," Athletic Director Barry Alvarez said.

Dane is one of a handful of Wisconsin counties where COVID-19 activity levels are "high" instead of "very high," according to the state Department of Health Services. Still, there’s concern after a very rocky start to the school year.

Last month, the Badgers suspended football activities for two weeks following a spike in positive COVID-19 tests among players and essential staff, who are tested daily.

The Big Ten Conference waffled for weeks over whether it would play football this fall. After finally deciding to kick off in late October, the conference announced it wouldn’t sell game tickets, though universities can set their own policies for family members.

While the league is getting a late start to the season, other conferences have already opened play, and many teams have welcomed fans to their stadiums – not always to great results. Last week, police emptied the student section at Southern Methodist University after unmasked young fans failed to socially distance.

But fans are attending games in Florida and Georgia, where the New York Times says, "new cases are lower and staying low," though there’s no long-term guarantee coronavirus infections won’t spike again in those states.

The news from UW-Madison comes days after the Green Bay Packers announced there would be no fans at Lambeau Field indefinitely.

Wisconsin is averaging more daily coronavirus cases per capita than any other state with an NFL team, according to the New York Times, followed by Missouri and Tennessee. A practice squad player on the Kansas City Chiefs tested positive for coronavirus last week, while the Tennessee Titans are dealing with the league’s worst outbreak to date.

Packers President and CEO Mark Murphy said the team will base its attendance policies on the advice of local health professionals, including Dr. Michael Landrum, an infectious disease expert at Bellin Health Systems. Landrum said there are a number of factors to consider such as the number of local cases, test positivity rates, hospital capacity and whether schools are open.

"If the schools are still completely virtual, then that probably reflects that the community is still having significant rates, and it's probably not best to have a lot of fans watching a large football game," he said.

Right now, hospitals in Green Bay are "stretched pretty thin" due to the growing number of coronavirus hospitalizations, he said.

"We keep sectioning off more and more parts of the hospital for COVID care because the number of patients is increasing. We have significantly more patients now than we did back in the spring when we had our first initial wave of patients," he said.

The Packers will have a few weeks to see whether things improve, since the team won't play at Lambeau Field again until Nov. 1. In the meantime, Packers coach Matt LaFleur has asked residents to wear masks, wash their hands and socially distance to give the 4-0 team its best chance to finish out the season healthily.

Green Bay has the week off before heading to Tampa, where the Packers will play in front of fans for the first time this year. According to the Athletic, the Buccaneers are expected to welcome fewer than 16,000 spectators to Raymond James Stadium when they play the Packers on Oct. 18.

Through Week 5, the Miami Dolphins, Cincinnati Bengals, Cleveland Browns, Houston Texans, Indianapolis Colts, Jacksonville Jaguars, Denver Broncos, Kansas City Chiefs, Dallas Cowboys and Carolina Panthers have all opened their games to fans or have plans to do so, according to ESPN.

Landrum said the Packers and local health officials are watching closely to see whether there are any lessons to be learned from franchises that are allowing spectators.

"I'm thankful that the Packers are not having fans at their games right now, because I think with what's going on in Green Bay that's not wise," he said. "I'm a huge football fan. I'd love to go to the games if it were safe, but right now I don't think it's safe to do."