Monday Night Football is in Green Bay where the Packers will take on the Atlanta Falcons at an empty Lambeau Field.

Early in the season, the Packers (3-0) look like one of the league’s strongest teams. Meanwhile, the Falcons are winless despite averaging 30 points per game, having blown big fourth-quarter leads in each of their last two contests.

"Their record says 0-3, but it could easily be something else. They just haven’t finished at the end," said Packers running back Aaron Jones, who ranks fourth in the league for yards per carry.

The Packers will be without injured wide receivers Davante Adams and Allen Lazard. Lazard had six receptions for 146 yards last week in Green Bay's 37-30 win over the New Orleans Saints.

Even without those key players, the Packers are the odds makers' favorite to win Monday night.

It's been a high-flying start to the season for NFL offenses, especially the Packers. Green Bay is averaging a league-leading 40.7 points per game going into Monday night. 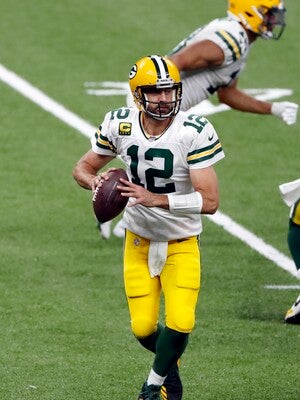 Through Week 3, the NFL saw a record number of total touchdowns, offensive touchdowns and total points scored. And things haven't slowed down — teams combined to score more than 50 points in nine of the 13 Week 4 games that have taken place so far.

Strong quarterback play has certainly contributed to the trend, with the NFL recording its highest-ever league-wide passer rating (96.3) and completion percentage (66.4) through Week 3.

NFL pundits have proposed other reasons teams are scoring so many points, including fewer offensive holding calls and the effects of playing in mostly empty stadiums.

Before the season started, the Packers announced there’d be no fans at their first two home games, including Monday night’s match up against the Falcons.

Green Bay has a bye next week, before heading to Tampa to face the Buccaneers on Sunday, Oct. 18.

The Buccaneers are expected to welcome about 16,000 fans to the game — mostly player guests and long-time season ticket holders — marking the first time this season Green Bay will play in front of spectators.

Announced attendance for today's Bucs-Chargers game, played to a limited capacity with first fans in attendance this season, was 6,383 at Raymond James Stadium. Plan is to ramp up to about 16,000 in two weeks for Packers.

On Saturday, Packers President and CEO Mark Murphy wrote on the team's website that no decision has been made on whether Lambeau Field will host fans when the Packers return against the Minnesota Vikings on Sunday, Nov. 1.

While he acknowledged that this scaled down season will be challenging for area businesses, he noted northeast Wisconsin is experiencing extremely high rates of coronavirus infections compared to other NFL markets.

"I would just ask that everybody consider others. I know that the masks aren’t necessarily something that we all want to do, but I know the Packers view, our football team's view, my view is we'll do whatever is necessary to keep everybody safe, to keep us being able to play this game that we all love," head coach Matt LaFleur said.

On Sunday, the NFL announced it would push back kickoff for the Packers and the Falcons to 7:50 p.m.

That's after the league added another game to its Monday night slate: The New England Patriots and the Kansas City Chiefs will kick off at 6:05 p.m.

The NFL is dealing with a more significant outbreak in Tennessee, where at least 20 players and staff members from the Titans have tested positive for the virus, according to the Associated Press. The league and its players' association are investigating whether the Titans violated COVID-19 safety protocols.

The Titans were supposed to play the Pittsburg Steelers in Week 4, but that game has been moved to Sunday, Oct. 25.