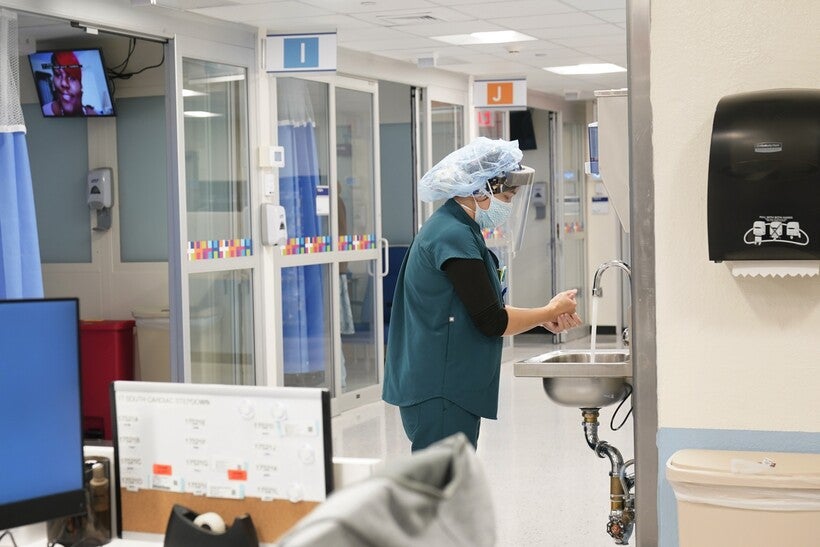 Medical personnel wash their hands while tending to patients in Bellevue Hospital in New York, Wednesday, Oct. 28, 2020. The rooms in this area have been outfitted to care for COVID-19 patients if there is a surge that overwhelms their usual critical care facilities. Hospitals in the city's public NYC Health and Hospitals' system have been upgrading their equipment, bracing for a potential resurgence of coronavirus patients, drawing on lessons learned in the spring when the outbreak brought the nation's largest city to its knees. Seth Wenig/AP Photo

New reports of COVID-19 cases have continued to come in well below their November peak in Wisconsin, based on the latest data published by the state Department of Health Services.

DHS reported 2,155 new cases of the disease Monday, bringing the average for the past seven days to 3,871 daily cases. One week ago, the average was 4,209 daily cases. It's typical for DHS to report fewer confirmed COVID-19 cases on Mondays, with labs usually posting fewer test results the day before.

There were 19 new deaths from COVID-19 reported Monday. On Monday, 5,751 tested negative.

Of the people who got tested for COVID-19 over the past week, 30.7 percent were positive for the disease, according to DHS. That rate has been declining slightly over the last few days.

On Sept. 30, DHS also introduced an alternative positivity rate, one that measures the percentage of tests that are positive, instead of the percentage of people who get a positive result. The new metric takes into account people who have been tested multiple times. The seven-day average for that number is at 12.8 percent.

According to the Wisconsin Hospital Association, there were 1,502 COVID-19 patients hospitalized as of Sunday. A total of 18,286 people have been hospitalized because of the disease, or 4.4 percent of all positive cases.

The latest figures bring the overall total of positive cases in Wisconsin to 414,332, according to DHS. A total of 3,738 people in Wisconsin have died from COVID-19.

Wisconsin's daily testing capacity — based on the availability of test supplies and adequate staffing — has grown from 120 available lab tests in early March to 59,695 as of Monday. The number of actual people with new test results reported Monday was 7,906.