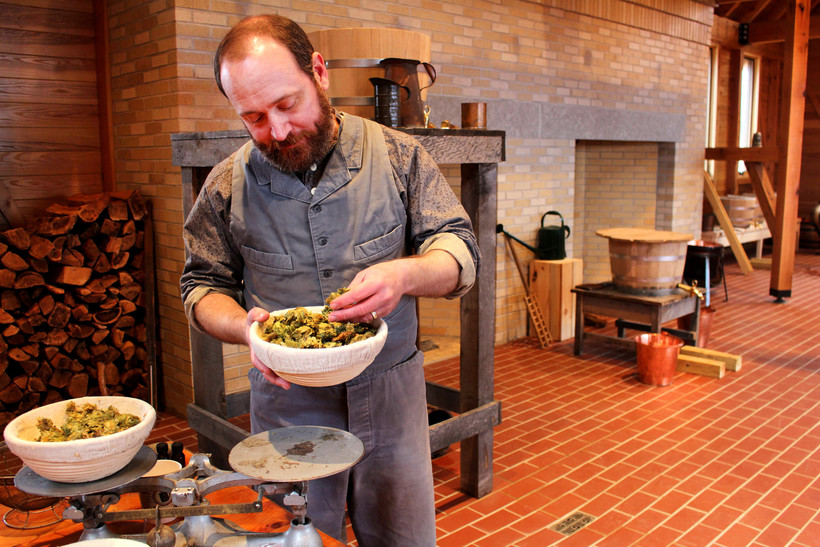 You don’t have to be a beer enthusiast to appreciate Old World Wisconsin's newest attraction. But it helps.

The Brewhouse in Eagle not only brews fresh daily batches of beer to be sampled by visitors, but in keeping with Old World Wisconsin's mission as a living history museum, Brewmaster Rob Novak demonstrates the evolution of different brewing techniques and technologies.

The brewery isn’t meant to replicate breweries from any particular era. Its purpose is to demonstrate a variety of brewing techniques.

Novak is digging deep into the history of brewing and how brewing styles from different European, Native American and Black American traditions combined and adapted when they came to Wisconsin.

For example, when French traders first came to the region, they had to adapt their recipes to the ingredients available in Wisconsin, and adopted brewing techniques from local Native American tribes. English recipes underwent a similar process as they were brought to New England and then eventually to Wisconsin.

Some of the farm houses on site have already started growing heirloom ingredients, like hops and barley, for the brewery to use. As the program continues, Novak said, they'll start incorporating other seasonal ingredients, such as juniper, spruce, wild rice, squash and all kinds of herbs and spices.

"We'll have a brewing garden. Hopefully by next spring, we'll start planting that," Novak said. "There's a lot of historic recipes out there that use all sorts of interesting plants that we can grow."

Processes also changed over time and with new technology. Brewing eagerly embraced industrialization, moving away from small batches fermented on farmhouses, to the large scale productions we know today.

"I'm trying to find today's popular styles — so IPA’s, sours— (and) trying to find the historic roots for those and brew them so people can taste what they might have tasted like," Novak said.

Most brewing traditions don’t — or even forbid — making beer in the summer or winter because temperatures were not conducive. As the program grows, Novak will experiment with seasonal beers brewed in the fall for winter consumption or in the spring for summer consumption.

"It's really been a lot of experimentation, and every batch is different," said Dan Freas, site director at Old World Wisconsin. "We're finding we can brew beer on one day and brew beer another day using the exact same process and the same ingredients, but if the environmental conditions are different, it often has an impact on the final product."

The brewhouse sits where a 2010 tornado wrecked several acres. Fortunately, damage to the historic buildings was limited, but an estimated 2,500 pines were cleared away. Turning lemons into lemon shandy, Old World Wisconsin decided to convert the site to one of Wisconsin’s favorite past-times.

"The idea of a brewery and a historic tavern had been part of the original master plan for Old World Wisconsin that was created back in the late 1960s, but that was an aspect of that plan that was never realized," Freas said.

The Brewhouse will be accompanied by a restored tavern from the 1930s that was relocated from Ashippun and is being remodeled as an interactive exhibit on the role of taverns in community life.

"When the tavern first opened in 1906, taverns were really male dominated spaces where the guys would hang out. And then after Prohibition, those taverns became much more community spaces and family-oriented spaces," Freas said. "So entire families would come into the tavern. They would be a place where you'd catch up with local neighbors and share the latest news and gossip."

The tavern will also serve beer brewed on-site. The building's second floor will serve as an event space.

Freas said they are in early stages of planning the creation of a beer garden. Organizers are also working on plans to collaborate with area brewers and brewmasters and hold dinners where brewers and chefs collaborate for a unique dining experience.

Public response to The Brewhouse during the few weeks it's been open have been very positive, Freas said.

"I think people are realizing that this is an important part of Wisconsin's history and culture," Freas said.