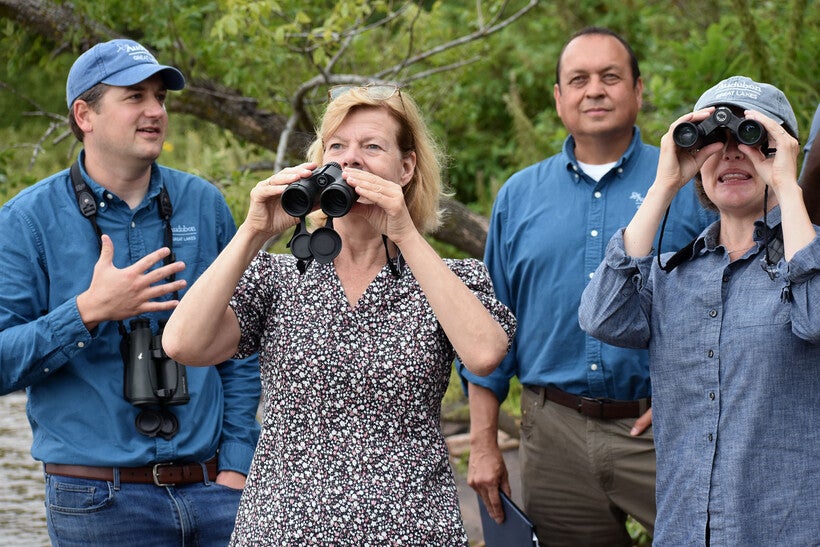 Nearly 3B birds have been lost in the last 50 years. Conservationists are trying to bring back habitat to ward off their decline.

A project near Superior is part of a plan to restore habitat for marsh birds in the Great Lakes
By Danielle Kaeding
Share:

When Tim Oksiuta moved to Ashland in 1974, he would commonly see yellow-headed blackbirds and black terns nesting along the highway.

But that was then.

"We might see one or two yellow-headed blackbirds during the year, and black terns are gone," Oksiuta said.

The same is true at Wisconsin Point roughly an hour away on the western edge of Lake Superior. Black terns once nested in coastal wetlands there every year. But the marsh bird hasn’t bred there for roughly two decades, according to Tom Prestby, Wisconsin conservation manager for Audubon Great Lakes. The nonprofit conservation group estimates black terns have declined as much as 80 percent. 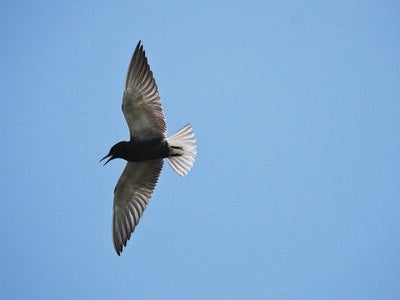 Prestby noted shrinking bird populations in the region are part of a larger trend as North America has lost nearly 3 billion birds since 1970. Their decline prompted Audubon and other partners to identify the most important sites in the Great Lakes region for bird habitat, ­including Allouez Bay by Wisconsin Point near Superior.

"This is one of the 12 wetlands that Audubon scientists have identified as extremely important for bird conservation," Prestby said.

Prestby, along with local, state and federal partners, walked with binoculars in hand to tour one of the sites deemed critical for restoring habitat for marsh birds across the Great Lakes, including species like the black tern. Now, the Great Lakes regional arm of the National Audubon Society plans to restore around 150 acres of coastal wetlands in the bay by controlling invasive species and promoting native vegetation. The first phase of restoration is set to begin late next year, and Prestby said that work could grow to up to 1,000 acres.

It’s part of a goal to restore nearly 300,000 acres for protection and restoration of at least 10 marsh bird species that have been declining. Those species include bitterns, yellow-headed blackbirds and black terns.

"We focus primarily on marsh birds, and the reason why is because marsh birds are really persnickety about the quality of the habitat that they live in," said Michelle Parker, executive director of Audubon Great Lakes. "So, if we're able to restore to their needs, it's a really good sign that we're restoring a significant amount of wildlife needs." 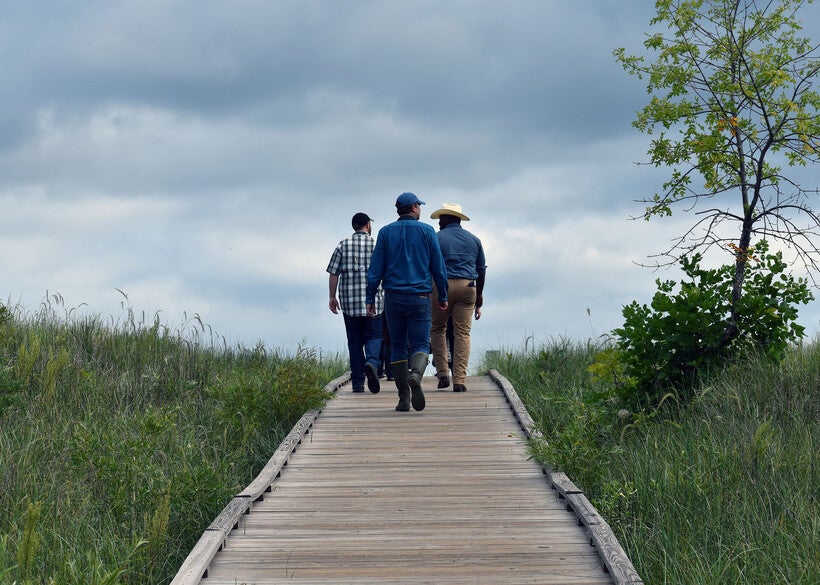 Representatives of the Audubon Society tour Wisconsin Point on the western edge of Lake Superior on Aug. 19, 2022. The site is one of a dozen across the Great Lakes prioritized for restoring coastal wetlands that support marsh birds. Danielle Kaeding/WPR

As they move to restore wetlands, Parker recognizes climate change threatens that work in places like Allouez Bay where they expect to see more extreme storms that bring intense waves and erosion that can degrade wetlands. Audubon Great Lakes is working with 15 partners on the habitat restoration project, including the Wisconsin Department of Natural Resources.

"We're going to ... allow for resiliency to climate change, whether that is increased storm frequency, whether that is more dramatic fluctuations in water levels," said Dave Grandmaison, the DNR’s program coordinator.

He said they’re exploring whether to use dredged material to create structures like islands or shoals to buffer wetlands from wind and waves. The National Audubon Society has recognized Wisconsin Point as an important bird area for birds migrating along the western edge of Lake Superior.

"We have a really good diversity of habitats and also a lot of wetlands, which are important for food during migration," said Karin Kozie, vice president of the Chequamegon Audubon Chapter. "And I would say that we're mostly interested in protecting and maintaining the habitats that we have so that we can keep these important areas for migration." 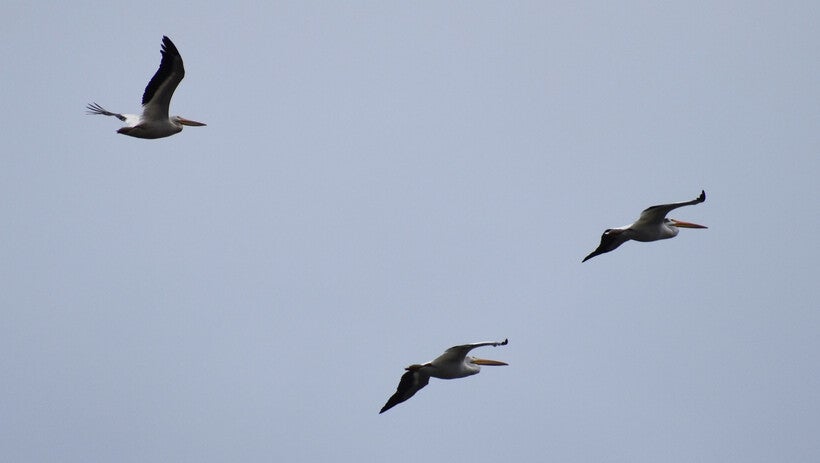 White pelicans flying over Wisconsin Point on the western edge of Lake Superior, which is a bird sanctuary in Wisconsin. Danielle Kaeding/WPR

"Many birds have filled our backyards and our lives with song. They now call out to us in silence," Johnson said.

A 2019 report from the group found 389 bird species may face extinction if global warming trends continue. In the Great Lakes, species like the bobolink and common loon are among the most vulnerable.

Scientists have urged reducing global warming by 1.5 degrees Celsius or roughly 3 degrees Fahrenheit to stave off the worst effects of climate change, which they say is a threshold that the world is expected to blow past.

Despite that, Parker said there’s reason for hope. She pointed to areas where they’ve already restored habitat across the Great Lakes, like Calumet’s Big Marsh Park in Chicago, that have seen at-risk birds return. They include the least bittern and common gallinule, which previously hadn’t nested at the site in more than a decade. 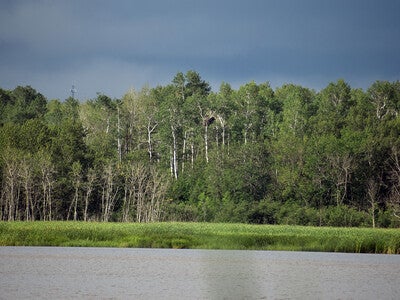 A bald eagle nest can be seen just across the bay from Wisconsin Point on Aug. 19, 2022.
Danielle Kaeding/WPR

Earlier this year, President Joe Biden announced another $1 billion for the program on top of its annual funding through the bipartisan infrastructure law. The DNR received $475,000 in funding under the program for the first phase of marsh bird habitat restoration in Allouez Bay. The agency has requested another $1.35 million to carry out the next phase.

Democratic U.S. Sen. Tammy Baldwin has supported both increased funding for the program and the bipartisan infrastructure law. She said sites across the Great Lakes were grappling with great degradation prior to the inception of the Great Lakes Restoration Initiative.

"We have to be good stewards," Baldwin said, "and hand down to the next generation something that is of higher quality and cleaner and safer."

Investigation: Longtime Eau Claire County Sheriff died by suicide
UW-Platteville Richland campus cancellation of in-person classes 'should not be read as a sign' for other Wisconsin branch campuses
Prosecutors move to dismiss Wisconsin abortion ban challenge
Harassment or free speech? Wisconsin Supreme Court hears arguments in case of protestor at family planning clinic
Wisconsin's next partisan battle will be over the balance of power on its Supreme Court
More WPR News