The policy-setting board for the Wisconsin Department of Natural Resources has signed off on the next step in proposed revisions to wolf harvest regulations.

The Natural Resources Board voted without discussion Wednesday to authorize a preliminary public hearing on the agency’s proposal to end the night hunting of wolves, shorten the period for registering harvested wolves and provide tags for specific hunting zones.

In February, state-licensed hunters blew past the 119-wolf quota and harvested 218 wolves in less than 72 hours.

The Trump administration announced last fall it would remove the animal from the endangered species list across most of the country beginning in January, prompting lawsuits from environmental and wildlife groups to restore the protections.

On Wednesday, groups including the U.S. Humane Society of the United States and Sierra Club filed a petition with the U.S. Fish and Wildlife Service to restore protections, citing legislation by Idaho and Montana to drastically reduce wolf populations.

The Biden administration has said it's reviewing the wolf’s delisting, along with other agency decisions.

Wisconsin law requires a wolf hunt when the animal isn't listed as an endangered species. The DNR first proposed holding a wolf hunt this fall to allow more time for tribal consultation, public input and updating its outdated wolf management plan. But Kansas-based Hunter Nation sued the agency to force a season. A Jefferson County judge ordered a hunt to be held in February. The DNR appealed the ruling, but an appeals panel dismissed the case.

The NRB set an overall quota of 200 wolves for the hunt that was split between state-licensed hunters and Wisconsin’s Ojibwe tribes. Tribes have declined to hunt wolves because they view the animal as a relative. The DNR has said the use of hunting dogs provided an "efficient" means to harvest wolves in February, prompting an early close to the hastily enacted season.

The number of wolves in Wisconsin had grown from just 25 animals in 1980 to 1,195 wolves prior to the February wolf hunt, according to the DNR. As the number of wolves has expanded, farmers and hunters have reported increasing conflicts with wolves and less tolerance for the animal across their range.

The NRB also approved an eight-bull quota for this fall’s elk hunt, but it delayed action on a new 10-year elk management plan.

Wisconsin has two elk ranges that include the Clam Lake herd in northern Wisconsin and the Black River Falls herd in southwestern Wisconsin. Wisconsin first approved a modern-day elk hunt in 2018 after the northern elk herd surpassed 200 elk for the first time since they were reintroduced to the Clam Lake area in 1995.

The current population estimate for the northern elk herd is an average of 332 elk, which is a 12 percent increase over last year’s population estimate. The state has previously approved a 10-bull harvest quota for elk, but state wildlife managers are recommending a lower quota as the herd’s bull population has declined.

"Beginning in 2019 into 2020, we began to see slower growth in the bull segment of the herd as compared to the cow segment of the herd," said Scott Roepke, DNR wildlife biologist. "We believe the harvest is having an impact on that bull growth."

NRB vice chair Greg Kazmierski was the lone board member to oppose reducing the quota. He disputed that the elk harvest was impacting the population overall, citing other states with successful hunts that have much lower ratios of bulls to cows in their elk herd.

The DNR’s new 10-year elk management plan met opposition from farmers and growers during Wednesday’s hearing. The board tabled action on the plan until its next meeting in June.

The new plan would change the names and boundaries of elk herds and create elk hunting units within them. The plan would also extend the season for hunting elk in the fall.

Tom Lochner, executive director of the Wisconsin State Cranberry Growers Association, voiced concern about the size and expansion of the elk herd in northern and central Wisconsin.

Cranberries are Wisconsin’s largest fruit crop and provide more than 60 percent of the nation's crop each year. Cranberry growers provide around $1 billion in economic benefits to the state, Lochner said. 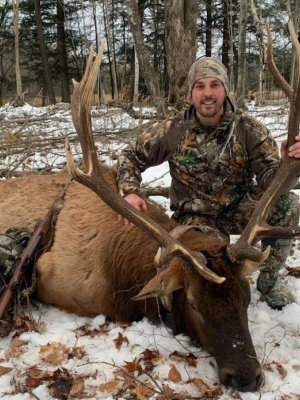 Jed Becker harvests an elk from the southern part of the range for the Clam Lake elk herd.
Photo courtesy of the Wisconsin DNR

He said farmers are experiencing damage to their crops and opposed the state’s elk management plan. Lochner sought changes to limit damage to cranberry growers from elk, including limiting the elk’s range and herd to 200 animals. He added that growers experiencing elk damage should receive 100 percent cost-share assistance in wildlife damage abatement funding from the state.

"The proposal to quadruple the size of the herd to 360 animals is just unacceptable," Lochner said.

Jim Bible owns 100 acres of cranberries near Black River Falls. He said elk will paw up his cranberry vines, damaging the crop for up to three years. He’s tried to use cannons, streamers and lights to deter elk from interfering with his crop. Bible said he spent "every hour on the hour" patrolling his marsh in the fall of 2019 to keep elk away.

The DNR is expected to reimburse him 100 percent for the cost to install a fence around his marsh, but he said around $12,000 in site preparation won’t be covered under wildlife abatement funds.

Will Peasley, who runs a sixth-generation dairy farm north of Black River Falls, also voiced concern with the proposed expansion of the elk range. He noted about 100 acres of his farm would be within the expanded range. Peasley feared what may happen if elk wandered through his fields and damaged crops.

"To be honest, I’m scared for the livelihood of our farm," Peasley said.

If elk are allowed to expand, Peasley said there has to be a different payment system for wildlife damage abatement.

The DNR’s Roepke said there are nine additional cranberry marshes that would be included in the expanded range under the new 10-year elk plan. Seven of the nine would be eligible for abatement funding, including two additional sites in Wood County.

Roepke said the agency had not looked at impacts to crop farmers, noting most of the expanded range was forested. The board is set to reconsider the plan at its next meeting.

The proposals to set standards are based on recommendations from the Wisconsin Department of Health Services released last year, including for six pesticides and 16 PFAS chemicals. State health officials recommended individual standards for a dozen PFAS chemicals along with combined standards for four more PFAS substances.

Steve Elmore, the DNR’s program director for drinking water and groundwater, said groundwater is used by more than two-thirds of Wisconsin residents for their drinking water. The agency has identified nearly 70 sites statewide that are contaminated with PFAS, including sites in Marinette, Superior, La Crosse and Madison.

"Some of these kinds of compounds now are not necessarily new, but we have new information that they are harmful to health," said Elmore.

Chemicals like PFAS, perfluoroalkyl and polyfluoroalkyl substances, have raised concern because they don't break down easily in the environment. The so-called "forever chemicals" have been found in firefighting foam and everyday products like nonstick cookware. They’ve been linked to an increased risk of kidney and testicular cancer, thyroid disease and fertility issues.

For homeowners, Elmore said groundwater standards for the substances would be used as guidance to determine whether treatment or a new well may be necessary if levels are deemed unsafe.

"The department will not require you to, say, abandon your well, but we will take further action to find the source of that contamination and hopefully eliminate it from the groundwater so that it's not in your well," said Elmore.

For drinking water, Elmore said public water supplies and systems that serve more than 25 people year-round would have to meet any standards set for the 16 PFAS chemicals. They would also be required to test regularly for the substances.

"Municipal systems would have to budget and pay for the sampling for these contaminants," said Elmore.

Preliminary hearings will be held June 4 on the scope of the proposed rules to set standards for the substances in groundwater and drinking water. The board would vote on whether to approve that and begin the rulemaking process at its June meeting. Regulators have 30 months to develop those standards once the board signs off on moving forward with the proposed regulations.