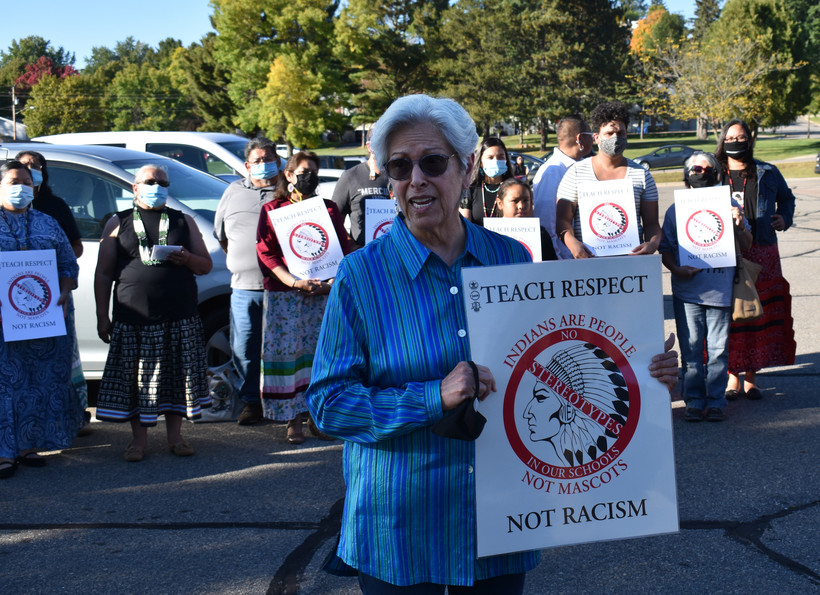 Barb Munson speaks at a press conference Monday, Sept. 27, 2021 after a Wausau teacher was photographed wearing a stereotypical Native costume during a history lesson. Rob Mentzer/WPR

District Issued Apology After Image From Lesson Was Shared On Social Media
By Rob Mentzer
Share:

Native leaders in central Wisconsin are calling for changes after a teacher at Wausau West High School dressed up in a stereotypical Native American costume for a class lesson.

On Friday, the Wausau School District issued a public apology and said it would conduct a "thorough review of our curriculum" after the teacher was photographed by a student and the incident spread on social media. In a press event Monday afternoon, Native American leaders said the district should go further than that and rethink how and by whom Native history is taught.

"Our goal is to challenge Wausau to improve its curriculum and to develop a model program ... that makes the community proud and engages people really strongly," said Barb Munson, a member of the Oneida Nation and a longtime state activist for retiring the use of Native mascots.

The use of the Native costume by a teacher surfaced last week when the father of a Native student in the class shared in a Facebook post a photograph depicting a teacher wearing braids and a headband while teaching a history lesson. The father, Biskakone Greg Johnson, did not respond to a message from WPR. He told the Wausau Daily Herald last week that the teacher’s actions "cheapened the whole experience of Native American history." 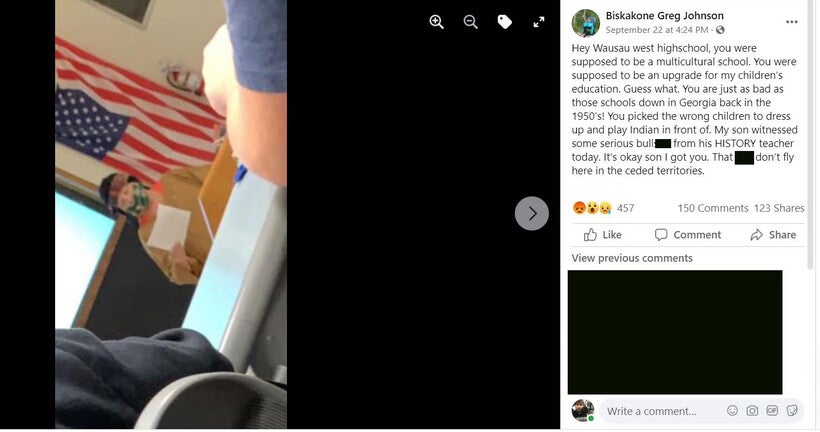 A parent shared an image on social media of a Wausau teacher dressed in stereotypical Native American garb during a class lesson. Screenshot

Activists steered clear of putting blame on the individual teacher, whose name was not released by the district. Instead, they focused on what they said are systemic issues of stereotyping and dehumanization in the teaching of Native culture.

"This instance has demonstrated that our educators and district administrators may not be aware that these types of bias incidents are harmful to all students, not just American Indian students," said Karena Thundercloud, an elected Ho Chunk leader from Black River Falls.

In 2019, Wausau was a state leader in a push to retire the use of Native mascots and imagery at districts across the state. Then-Wausau School Board president Tricia Zunker, who is a Ho Chunk Supreme Court justice, led that effort, which attracted support from 18 school districts across the state. Zunker, who ran for Congress as a Democrat in 2020, lost a reelection to the school board in April.

At Monday's press conference, Zunker called on the Wausau School District to work with tribal leaders and the state Department of Public Instruction’s director of American Indian studies to strengthen its indigenous studies curriculum. That call was echoed by a letter to the Wausau School Board from the Wisconsin Indian Education Association.

In its statement apologizing to students and parents that was shared with media, the Wausau School District called the lesson "a huge mistake" and said the district "failed to recognize the disrespect we showed the culture and heritage of the people we portrayed."