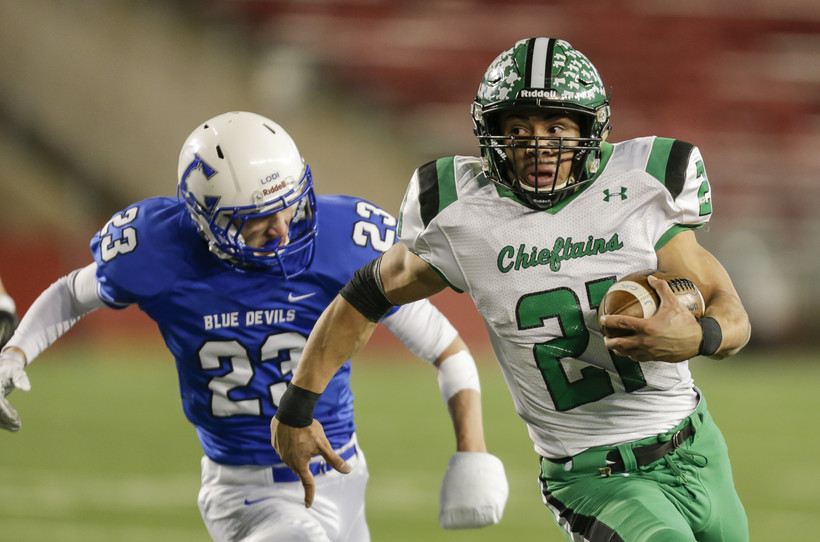 The Osceola Chieftains are one of about 30 schools in Wisconsin that still use Native American nicknames or imagery. A resolution at the Wisconsin Association of School Boards would urge an end to them. Andy Manis/AP Photo

18 Districts Support Resolution To Be Considered By State Body In January
By Rob Mentzer
Share:

Mart Grams wasn't inclined to support the resolution urging an end to Wisconsin's Native American mascots. Grams, a member of the Shawano School Board, considers himself a constitutional conservative. He figured it was none of Shawano’s business what mascots other districts may choose to use.

It was testimony at a school board hearing from a Native American man who once portrayed the school's Indian mascot that changed Grams' mind.

The man had been cornered at an away game by opposing fans who shouted him down. It was traumatic to him and that came through when he spoke. Hearing him relate that trauma even decades later, Grams thought, "Something’s got to change."

Shawano is one of 18 school boards across the state to come out in favor of urging an end to Native American mascots statewide. The resolution originated in Wausau, and Tricia Zunker, president of the Wausau School Board, sought support from other districts after it passed in Wausau. It will go before the Wisconsin Association of School Boards, a lobbying organization, in January.

Zunker said the issue is of personal interest to her as a Ho-Chunk woman. She stresses it should be understood as a matter of education policy.

The resolution says that Native American mascots, logos and nicknames undermine the educational experience of students. That means both Native and non-Native students, Zunker said. She cites a 2005 resolution of the American Psychological Association that recommended retiring all Native mascots. The association cited evidence that the mascots contribute to a hostile learning environment for Native students. The potential harm to non-Native students, the psychologists wrote, comes by "undermin(ing) the educational experiences of ... those who have had little or no contact with indigenous peoples."

Opponents of changes cite longstanding community traditions. Grams said the best case for making the change statewide is tied to concrete evidence like that compiled by the American Psychological Association of educational harms to students.

"How do you teach that," Grams asked, "when your mascot is screaming and hollering during basketball games?"

Zunker worked to secure the support of many of the school boards that voted to support the resolution, which include Madison, Milwaukee, Green Bay and Appleton as well as smaller districts such as Ladysmith and Bowler. But she said she believes she could have gotten many more.

The Wausau School Board passed its resolution Aug. 12, and the deadline to submit the resolution to be considered at the January conference of school boards fell in mid-September. The 17 school boards’ support was about a month’s work.

Wausau doesn't have Native American mascots, Zunker said, but its students "are unwillingly exposed to them at scholastic and athletic events throughout the state. … What are our students cheering in the stands? Are they cheering 'Beat the Indians'? That's not acceptable."

Dozens of Wisconsin school districts have already retired school mascots that used Native American images, but about 30 districts in the state still employ Native imagery. Some have sought to find a compromise; for example, in Mosinee, the school district has long since retired Native American imagery on uniforms or logos, but it retains the nickname "Indians." Other districts use related nicknames such as "Chiefs," "Warriors" or "Blackhawks."

The resolution that will be considered by the Wisconsin Association of School Boards won't have the power to make any district make a change. Zunker and Grams say further changes may be needed by state lawmakers.