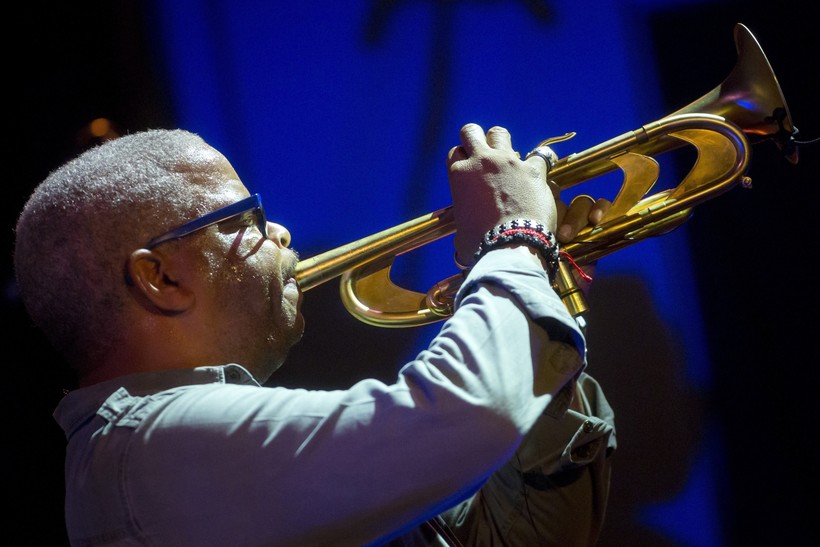 The Music Industry Pushed Jazz To The Sidelines, Now It's Back

Ted Gioia was in high school when he first visited a jazz club – The Lighthouse at Hermosa Beach – and he realized instantly, "This is it. This is what I've been looking for." It was the early 1970s. Gioia was a restless music student, bored by his rock band, stultified by his classical piano studies.

Now, after four decades at the forefront of jazz as a critic, historian and pianist, Gioia said a new generation of young musicians is having a similar experience: discovering an antidote to stale, formulaic pop music in the energy and ecstasy of jazz.

This is not the sound of your grandad's supper club. Today's jazz has been "hybridized, globalized and … turbocharged," Gioia said.

With jazz winning young fans and attracting a broad public audience for the first time in decades, Gioia wrote a new book, "How to Listen to Jazz," designed to introduce a new generation to the art of listening to the great American art form.

The following Q&A comes from a conversation with Gioia, edited for clarity and length.

What's The Biggest Misconception People Have About Jazz Today?

There's an attitude prevalent about jazz nowadays, which is so bad for fans and for the music: this idea that jazz is a kind of nutritional supplement or vitamin. You listen to it because it's good for you. To my mind, that completely negates the reason I and other fans came to jazz in the first place: because of the visceral excitement of hearing it.

Some Big Pop Stars Have Been Turning To Jazz Lately. Why Now?

The music world is in crisis. The people running the labels don't like to talk about it, but if you look at the revenues in the music industry, they've been declining since the last century. What they need right now is exactly what jazz has to offer: a visionary approach to music, creative rule breaking, and a way of getting out of formulas. I think the music industry right now is similar to the way it was in 1952 (and) 1953 – nobody could have predicted Elvis and rock 'n' roll, but everybody could hear the sameness, the boring repetition in music, and they knew something new had to come. I think we're in the exact same situation right now. I don't believe jazz on its own is the answer, but I do believe jazz is part of the solution.

You Describe Jazz As Essentially Ecstatic In Nature. Ecstatic How?

I believe that greatness in jazz is to immerse yourself completely in the present moment. And when you get into that state, the music seems to play itself, almost as if someone else is playing it for you.  I think, and this is controversial, but I think this is the reason so many jazz musicians have had drug problems. Their whole professional existence is about being fully invested in these intense, ecstatic moments. It's great for the music, but I do think there's a jazz personality that has destructive elements, because what do you do when the music is over and you have to leave the club and go home?

Do You Think The Audience Experiences Some Of That Ecstasy Too? Can You Get A Contact High From Being At A Great Jazz Performance?

I've experienced it in nightclubs, and I've seen other people experience it. It almost becomes a kind of ecstatic cult or ritual experience. If you try to describe it afterwards to someone who wasn't there, you can't. You just can't. This doesn't happen every night, but talk to any jazz fan who's been listening to live jazz for more than five or 10 years and they all have these experiences in which something happened on a specific evening, a kind of energy went through the audience. And they'll just say, 'I wish it was recorded,' or 'I wish I could go back.' That's the number one reason I tell people to listen to jazz because you'll hear something in one night that will never happen again. That's rare in any culture but particularly in ours today where so much is built on repetition and formula.

What Are You Listening To Now That Excites You?

Few musicians have me more excited than Kamasi Washington, a young sax player from Los Angeles. He's best known for performing with (rapper) Kendrick Lamar, which has given him visibility among people who don't normally listen to jazz. But those people really need to seek out his album "The Epic," an extraordinary work. He brings a jazz band and a string orchestra and voices and blends it all together in one of the most ambitious projects I've heard in years. It's a really big vision of jazz, not like something learned in school or codified in a textbook. Aim for the fences, like a baseball player trying to hit a home run – that's what I hear when I hear Kamasi Washington play.