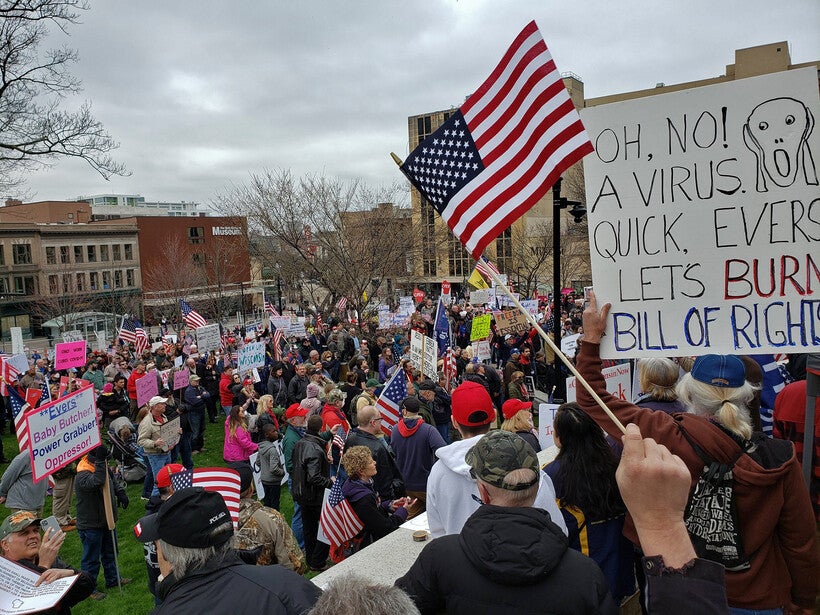 More than 1,000 protesters gathered Friday afternoon at the state Capitol to rally against Wisconsin's stay-at-home order, defying health officials' guidance and highlighting a growing political rift over how and when states should reopen businesses during the coronavirus pandemic. 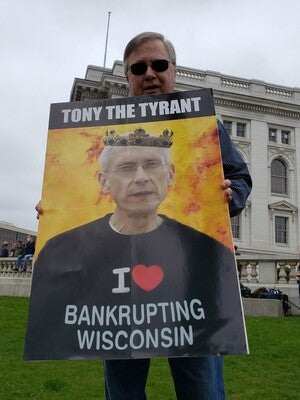 Attendees like Mickey Bitsko said the Evers administration's "Safer at Home" order, which has been in place since March 25, has gone too far.

"This is an illegal assembly," Bitsko said. "Evers says we're illegals. He says people everywhere are nonessential. This one, that one. He's picking winners and losers. Who does that sound like? Chairman Mao. Joseph Stalin. Lenin. Trotsky. All the rest of them. They pick the winners and losers. Don't be on the losing side of this one."

Wisconsin’s current stay-at-home order bars "public and private gatherings of any number of people that are not part of a single household." 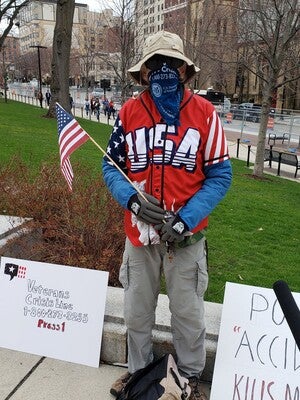 A State Capitol Police spokesperson said officers are balancing protecting protesters' civil liberties alongside their health and safety. Approximately 1,500 attended the protest, according to the state Department of Administration, and there were no arrests or citations issued.

Russ Lachman, 69, of La Crosse, said the state's order should be tailored to the needs of different counties because rural communities don't have as many cases of the virus. (A map of COVID-19 cases and deaths broken down by counties can be seen here).

Alex Leykin, 52, of Mequon, said he thought the state's initial response to the pandemic was "excellent," but believes now it's time for things to change.

"We now know what we're facing," Leykin said. "It's time to let the citizens decide for themselves how and who to protect."

Some protesters carried assault rifles through the crowd. 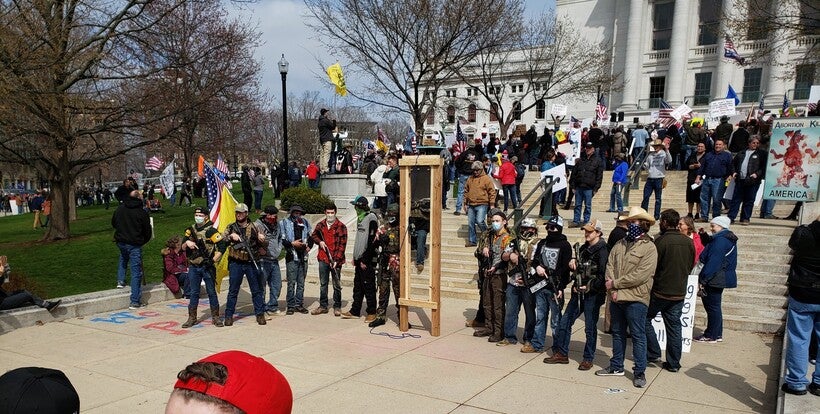 Some protesters carried assault rifles at a rally against Wisconsin's stay-at-home order at the Wisconsin Capitol on April 24, 2020. Shawn Johnson/WPR

Similar protests have been springing up across the country.

Before the event began, the number of attendees expected was unclear, as the Facebook event organizing the protest was deleted from the social media site, as were other similar events across the country. 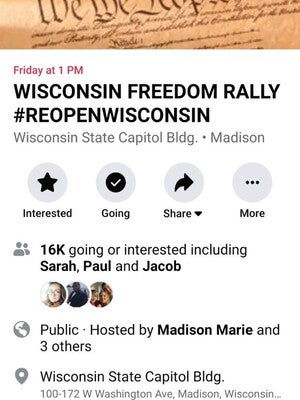 Thousands of people RSVP'd to a protest of Wisconsin's stay-at-home order before the event was removed from Facebook. Carina Abrego-Koch/WPR

According to a photo of the deleted Facebook event page taken earlier this week, roughly 16,000 people indicated they were interested in or planning to attend the protest.

A Facebook spokesperson said the Friday protest was removed from the site because "events that defy government's guidance on social distancing aren’t allowed on Facebook."

Several restaurants around the Capitol Square announced Friday morning they would be closed for normal lunchtime service in response to the expected influx of people.

Gov. Tony Evers said Thursday he supports protesters’ right to gather and express their frustration with the stay-at-home order.

"Using the First Amendment to express yourself, to voice your opinion, is quite sacred," Evers said on a call with reporters.

However, the governor urged protesters to follow social distancing guidelines.

"We’re making the assumption that these are all good Wisconsinites that are establishing their right under the First Amendment to express their views, and we also believe they will make sure they’re physically distanced from each other," he said.

Evers said he didn’t expect Capitol police, who denied a permit for the event because it violates the stay-at-home order, to be out using a "yardstick" to gauge whether people are socially distancing.

Counter-Protesters Push Back On Event 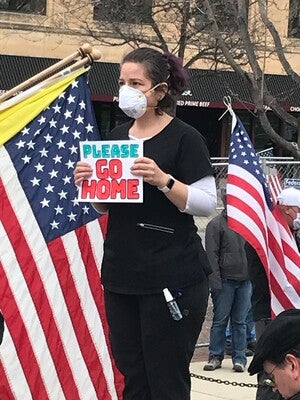 Psychiatrist Angela Janis held a counter-protest sign at a rally against Wisconsin's stay-at-home order in Madison on April 24, 2020. Shamane Mills/WPR

"We are facing unprecedented risk right now and it really takes heroic efforts on everybody’s part, including staying at home," Janis said. "And we’re starting to make a difference, inroads, and if we lift up now, we’re just going to backtrack and have to stay home longer."

Other Wisconsinites expressed their support for the stay-at-home order with virtual counter-protests Friday. One virtual event online had nearly 10,000 RSVPs from people who say they're either interested or planning to participate as of Friday afternoon.

Another scheduled for the weekend had more than 2,000 RSVPs.

In a press release, Marybeth Glenn, one of weekend event's organizers, said "no one is enjoying the limitations put in place," but believes they're necessary to preserving public health.

"We empathize with the financial and emotional struggles so many are experiencing due to the Safer at Home measures, and that includes members of our group," Glenn said. "However, even if the restrictions are lifted, citizens do not feel safe and we are listening to the epidemiologists and healthcare professionals."

SEIU Healthcare Wisconsin also organized the placement of 1,300 candles on the Capitol steps Thursday night in recognition of every person in Wisconsin who has been hospitalized with COVID-19. According to the state health department, 1,318 had been hospitalized as of Thursday afternoon. SEIU Healthcare Wisconsin organized the placement of 1,300 candles on the Capitol steps Thursday, April 23, 2020, in recognition of every person in Wisconsin who has been hospitalized with COVID-19. Jenny Peek/WPR

On Wednesday, African American Council of Churches president Rev. Dr. Marcus Allen called the protests "sad" and "sickening" on a call with reporters.

"What we have in place already has lessened the amount of people that would die," Allen said. "Why would we interrupt that?"

Mariah Clark, an emergency room nurse at University Hospital in Madison, also spoke on the call. She said the nationwide protests of stay-at-home orders "show no respect for those of us who are trying to keep Americans safe."

"All of us are risking our lives during this crisis," she said.

Kathy Hintz, who works on the cleaning staff at a hospital in Appleton, said in an interview with Wisconsin Watch this week that she was "in shock" after learning about the protests.

"If they had to go through what we go through, they would have a different perspective," she said of the protesters.