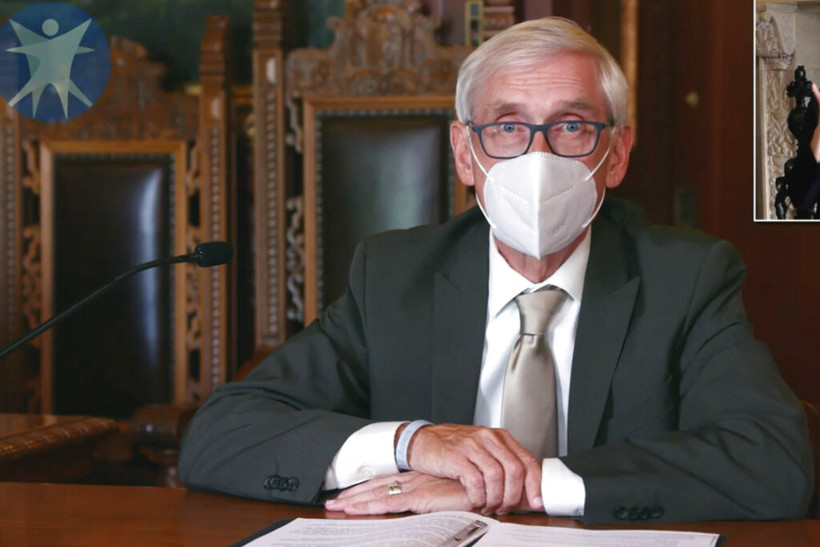 This July 30, 2020 image taken from video by the Wisconsin Department of Health Services shows Wisconsin Gov. Tony Evers in Madison, Wis. A Wisconsin judge on Monday, Oct. 12, 2020, upheld Gov. Tony Evers' mask mandate in the face of a conservative challenge. St. Croix County Circuit Judge R. Michael Waterman ruled that Evers did not overstep his authority by issuing multiple emergency orders on the coronavirus. Wisconsin Department of Health Services via the AP

Gov. Tony Evers used his first statewide address in response to the COVID-19 pandemic in Wisconsin to urge people and businesses to change their behavior in order to curb the spread of the virus.

"I am concerned about what our current trajectory means for Wisconsin health care workers, families, and our economy if we don't get this virus under control," Evers said. "We must get back to the basics of fighting this virus just like we did last spring, and it starts at home."

Evers used his speech to announce a new executive order that calls on Wisconsinites to stay home as much as possible and to avoid gathering with people outside their household. The order also urges businesses to do things like allow employees to work remotely, when possible, and to require masks.

The order was unique in that, unlike previous orders from the governor or his administration, it doesn't set requirements or limits on people and businesses with accompanying penalties for noncompliance.

Evers mentioned one of those previous orders, his statewide stay-at-home order, that was struck down by the state Supreme Court in May. He called the court's action "a decision that hamstrung our ability to respond to this virus by using the tools supported by science and public health experts."

Other orders from Evers and his administration are also facing legal challenges.

The governor said he would soon introduce state legislative proposals to respond to the pandemic in Wisconsin, but didn't provide additional details about the plans. He also urged Congress to pass another federal stimulus bill.

Evers cited an estimate from the Institute for Health Metrics and Evaluation, an independent global health research center at the University of Washington, that said Wisconsin could have 5,000 COVID-19 deaths by Jan. 1 "if no further actions are taken to get this virus under control."

"The surges we see — the new cases, hospitalizations, and deaths — these are not foregone conclusions. These are predictable and preventable," the governor said. "That means the fight against this virus is winnable, but only if we fight it together."

Evers' remarks came after Wisconsin set new records for daily confirmed cases and deaths from the virus on Tuesday. The state Department of Health Services reported 7,073 new cases of the disease, bringing the average for the past seven days to 5,825 daily cases. One week ago, the average was 4,536 daily cases. There were also 66 new deaths from the virus reported on Tuesday, bringing the total deaths in the state to 2,395.

State Legislature Dormant During Much Of Pandemic

State lawmakers haven’t been in session since mid-April when the Assembly and state Senate met to approve a bill aimed at tackling some of the social and economic problems created by the pandemic in Wisconsin.

Evers signed the bill into law in April. It does things like lift a one-week waiting period for unemployment insurance in Wisconsin and require health insurers to cover COVID-19 testing. It also bars insurers from discriminating against people who have or have had the virus.

Since then, the governor and Republican leaders in the Legislature haven’t moved forward with any additional state law changes or programs in response to the pandemic.

Assembly Speaker Robin Vos and former Senate Majority Leader Scott Fitzgerald traded letters with the governor last month about meeting to discuss a path forward, but such a meeting has yet to take place.

Vos said late last month he would like to review state spending of federal CARES Act money to see where more support might be needed.

After Tuesday's speech, Vos told reporters he hopes the governor sits down with GOP lawmakers to find consensus before rolling out his new proposals.

"I think the people of Wisconsin want us to stop arguing about COVID and start working together," Vos said.

Vos said he reached out to the governor immediately after the speech to request a meeting. He also said he encourages people to follow CDC guidelines, "mask up," and only go out "when necessary."

Senate Majority Leader Devin LeMahieu, who claimed the position after Fitzgerald's recent election to Congress, didn't immediately respond to a request for comment.

Evers has been locked in a legal battle with GOP state lawmakers since the outset of the pandemic over how state government should respond to the spread of the virus in the state. In general, Evers has favored statewide orders, while Republicans have backed regional responses.

GOP state lawmakers, conservative groups and activists have filed several lawsuits against statewide public health emergency orders from the governor and his administration that do things like mandate masks and put restrictions on people and businesses during the pandemic.

In May, the state Supreme Court knocked down Evers’ stay-at-home order in a lawsuit brought by the GOP-controlled state Legislature.

Last week, a state appeals court blocked the Evers’ administration order limiting public gatherings, including capping bar and restaurant capacity to 25 percent in the state. The case is expected to go before the state Supreme Court.

The state’s highest court is scheduled to hear arguments next week in a case challenging Evers’ statewide mask mandate.

Evers’ address also came as leaders from counties across the state asked for more help from lawmakers and residents to contain the virus.

On Tuesday, Dane County Executive Joe Parisi signed a letter to Republican leaders in the state Legislature asking them to work with Evers on a comprehensive coronavirus plan.

"Unfortunately, the past several months have been marred by legal action and apathy, creating public confusion. Action, or in this case inaction, has consequences and it’s visibly on display in every hospital in this state right now," Parisi wrote.

While Dane County has among the strictest coronavirus restrictions in the state, they’re not effective when residents can simply visit another county to attend a gathering or eat at a crowded restaurant, officials told reporters Monday.

At a gathering of 10 people, there’s a 32 percent chance one of them will have coronavirus, and that number is even higher in many other Wisconsin counties, she said.

La Crosse County health officials are “stretched past capacity,” Health Director Jen Rombalski said in a statement Monday. La Crosse joined the growing list of Wisconsin counties that are asking coronavirus-positive individuals to assist with their own contact tracing.

A group of officials representing local governments, universities, businesses and health care providers in Dunn County called for urgent action by residents on Monday to stem the area’s "exploding" case count. If people don’t wear masks, wash their hands and socially distance, it could make it difficult for schools and businesses to remain open, they said.

Also on Monday, public health officials in Iowa County recommended returning to Phase 1 of the county’s reopening plan, which includes delaying non-essential gatherings, shifting most schools to virtual learning and postponing all contact sports, according to a news release.

"We have 42 percent of recent cases who have no idea where they contracted the virus. Anytime you leave your home, you should anticipate that you will come in contact with coronavirus," Iowa County Health Department head Debbie Siegenthaler said in a statement.