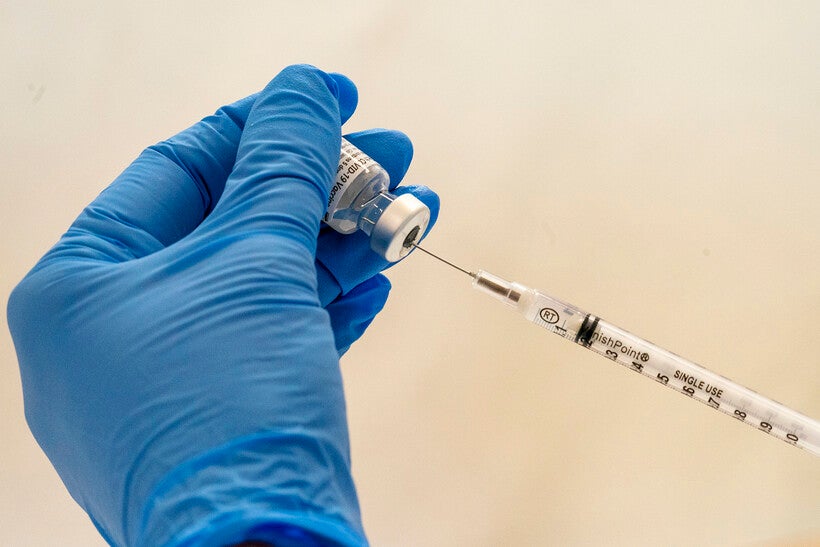 Registered Pharmacist Paula Agoglia fills a dead volume syringe with the COVID-19 vaccine at a pop-up vaccination site in the William Reid Apartments, Saturday, Jan. 23, 2021 in the Brooklyn borough of New York. The syringe allows for a full 6 doses to be extracted from each vial. Mary Altaffer/AP Photos

More Than 40 Percent Of Wisconsinites Age 65 And Up Have Received At Least 1 Shot
By WPR Staff
Share:

Rollout of the COVID-19 vaccine is continuing in Wisconsin, with the state reporting more than 1 million doses administered as of Wednesday. Meanwhile, new cases of the disease continue to decline in the state, based on the latest data published by the state Department of Health Services.

DHS reported 657 new cases of the disease Wednesday, bringing the average for the past seven days to 731 daily cases. Daily new cases have been on the decline since early January, when the average was about 3,000.

There were 10 new deaths from COVID-19 reported Wednesday. On Wednesday, 4,228 tested negative.

Of the tests for COVID-19 conducted over the past week, 3.1 percent were positive for the disease, according to DHS. That rate has been declining since early January. The rate takes into account people who have been tested multiple times.

According to DHS, 1,410,300 doses of coronavirus vaccine have been allocated to Wisconsin by the federal government as of Tuesday, an increase of 258,275 from a week ago. A total of 1,023,575 doses have been administered in Wisconsin as of Wednesday, with 40.5 percent of Wisconsinites age 65 and up receiving at least one dose of the vaccine so far.

DHS reported that 740,450 Wisconsin residents had received at least one dose, representing 12.7 percent of the state population. As of Wednesday, 263,877 people have received both shots in Wisconsin, completing the vaccination series.

According to the Wisconsin Hospital Association, there were 411 COVID-19 patients hospitalized as of Tuesday. A total of 25,498 people have been hospitalized because of the disease, or 4.6 percent of all positive cases.

The latest figures bring the overall total of positive cases in Wisconsin to 556,989, according to DHS. A total of 6,214 people in Wisconsin have died from COVID-19.

As of last Wednesday, all of Wisconsin's seven regions were listed as "high" and were seeing "shrinking" levels of COVID-19 activity, according to DHS.

Wisconsin's daily testing capacity — based on the availability of test supplies and adequate staffing — has grown from 120 available lab tests in early March to 59,273 as of Wednesday. The number of actual people with new test results reported Wednesday was 4,885.