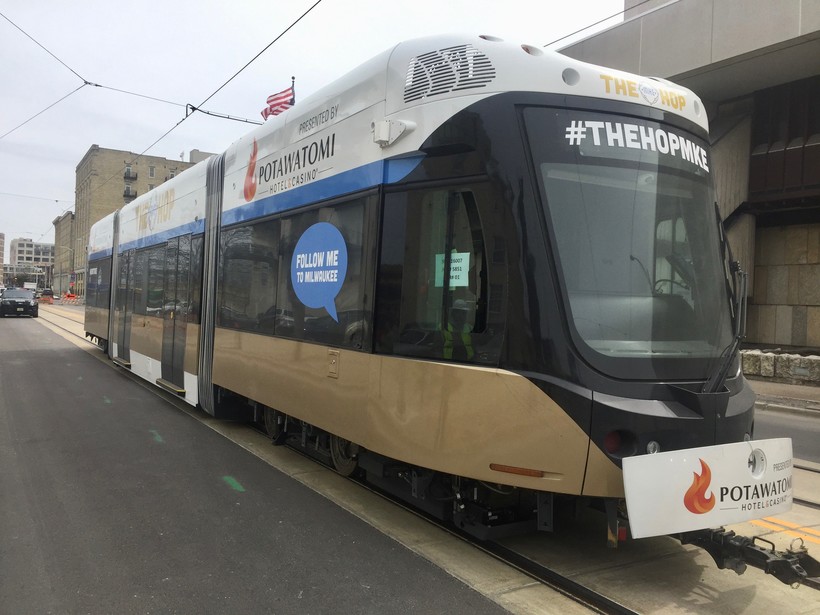 After one year of service, city leaders are celebrating the success of Milwaukee’s streetcar, The Hop, while the operation's lakefront line and widely publicized expansion remain on hold.

Milwaukee Mayor Tom Barrett was excited to announce the streetcar's ridership after a year.

In November and December of last year, ridership was at about 76,000. During the summer months, ridership increased even more.

"It has definitely averaged higher than what was projected, so I think that’s fantastic," Bauman said. "We are extremely pleased with that."

But Bauman also expressed frustration with the lack of urgency in getting The Hop’s lakefront line up-and-running before the 2020 deadline.

The city was granted $14.2 million federal Transportation Investment Generated Economic Recovery (TIGER) funding. According the Bauman, the city has already used half of those funds on construction for the lakefront tracks and building another streetcar. The federal grant requires the line to be operational by the end of 2020, but Bauman said that won’t happen.

"We were on track to have that lakefront line running by now," Bauman said. "It might be two or three years out depending on how long it takes for this real-estate to secure funding and get built."

Construction of the lakefront line is being held up by another project that was going to be built on the lakefront, but for which ground hasn’t yet been broken. The line would extend the 2.1-mile streetcar system another half-mile. The city plans to have the line stop at the base of the Couture development project.

Finishing the existing plans isn’t the only issue with The Hop.

In May, Barrett wanted to expand the streetcar route an additional 2.4 miles to the Wisconsin Center and Wisconsin Avenue. The $47 million plan was tabled by the city’s common council and discussion rang out about expanding the streetcar route even further to connect Milwaukee’s north and south sides.

Bauman said expansion was always part of the deal when the streetcar was first voted on back in 2011. He’s surprised that expansion has been such an ordeal after witnessing the streetcar's success.

"Expansion was assumed in this debate and in this political process from the beginning," Bauman said. "It’s very frustrating that now expansion has kind of hit a wall involving a variety of issues that again should have been dealt with ahead of time. If that were the case we’d probably be in construction today."

The Hop is also currently looking for additional partners to help fund free fare for riders. Potawatomi Hotel & Casino agreed to fund fares for the streetcar for the first year — and with that year up, questions of cost have emerged.

During the birthday celebration, Cleveland-based fiber network provider Everstream announced they were investing $27 million in Milwaukee, some of which will provide free fares for Hop riders during the holiday season.

"I’m thrilled to welcome Everstream to the Milwaukee community and the Hop family," Barrett said. "Thanks to Everstream, The Hop will continue to be a fun and free way to access all that our city has to offer."

"Everstream is providing the business of greater Milwaukee a new option for connectivity with the recent launch of our high-capacity, business-only fiber network," Everstream President and CEO Brett Lindsey said. "We’re proud to partner with The Hop and work together to continue moving Milwaukee forward."

The company’s sponsorship will start Friday, and continues through Dec. 31. It's unclear who will sponsor fares after Everstream.