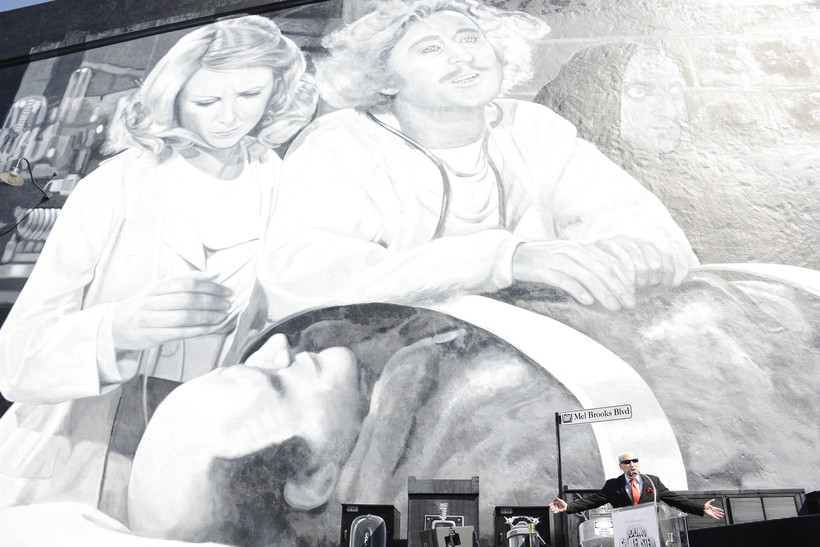 Comedy legend Mel Brooks unveils "Mel Brooks Boulevard" on the Fox Lot next to a mural tribute painted onto the side of Stage 5 where his feature film "Young Frankenstein" was filmed over 40 years ago on Thursday, Oct. 23, 2014 in Los Angeles. Photo by Dan Steinberg/Invision for Twentieth Century Fox Home Entertainment/AP Images

Milwaukee's Patrick McGilligan Takes Us Behind The Scenes Of 'Young Frankenstein'

"Gene wrote most of that script, and he'd write it after sitting around and talking with Mel for a long time," Milwaukee's Patrick McGilligan told WPR's "BETA." McGilligan is the author of "Funny Man: Mel Brooks."

"And then Gene would go away and do most of the writing, and then Mel would read it, and he would critique it and he would change it," McGilligan explained.

This back-and-forth collaboration between Wilder and Brooks is how the "Young Frankenstein" screenplay evolved. As a result, McGilligan said that it is Wilder's showcase as an actor. And unlike many of his movies, Brooks does not appear in "Young Frankenstein."

"Mel is not in the film because Gene said, 'Mel, I don't want you to be in the film because you'll break the fourth wall. You'll wink at the audience. And I really want to present this as a serious comedy about young Frankenstein,'" McGilligan said.

"Consequently, I think it's Mel's best-directed film because he was focusing on the performances and on the scenes," McGilligan said. "And it's very, very smoothly and beautifully directed, very beautifully designed. The performances are just perfect. And you might miss Mel because Mel could be very funny on the screen. Nonetheless, it makes it his strongest film as a director."

While filming Brooks' previous film, "Blazing Saddles," Wilder had been very impressed by Madeline Kahn, so he suggested she play Dr. Frankenstein's assistant, Inga. But Kahn wanted to play the part of Frederick Frankenstein's fiancée, Elizabeth — paving the way for Teri Garr to play Inga.

Cloris Leachman was known primarily for portraying Phyllis Lindstrom on "The Mary Tyler Moore Show" before she signed on to play the part of Frau Blucher, the housekeeper of the Frankenstein family's estate in Transylvania. "She 'wasn't really famous as that kind of over-the-top comedian that she becomes in Mel Brooks' films,'" McGilligan said.

"Mel is not really known as a great director of actors. Because they're playing in various ways in his films, cartoon characters, but he's very, very good at getting types or performers who are really going to go off on the script and really take the script a notch higher."

"Sometimes he might set up an argument just so that he could win it. For example, he decided that he didn't want to have the monster sing an Irving Berlin song. Gene put it in there because he knew Mel would like it. Mel didn't like it. And Mel screamed at him: 'If I put this in, everybody's going to accuse me of repeating myself.' They really would have very screaming arguments. And then at the end, Mel would say, 'OK, it's in. And Gene would say, 'Why now do you say it's in?' And Mel said, 'You convinced me by your intransigence.'"

Wilder and Brooks never worked together on another film. When Brooks decided he wanted to make a musical based on "Young Frankenstein," he was able to do so because the contracts gave him more rights as the producer of the movie than Wilder had when he sold the story rights to Brooks. So it was announced as a Brooks musical.

"Wilder was very uncomfortable with that," McGilligan said. "First of all, he didn't think it could be a musical or should be a musical. And he worried that it was going to change and he didn't want to be involved. And they really had a very awkward moment in their friendship after which Wilder decided that he wasn't going to stop Mel because there was no stopping Mel. So the best thing to do would be to shrug your shoulders and accept it and let Mel go out and do what he wanted with the musical, which is exactly what happened."