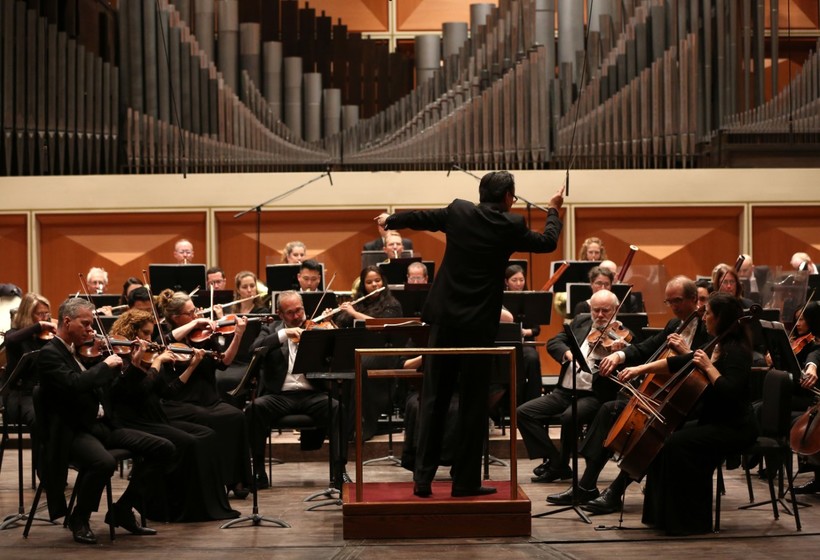 The Milwaukee Symphony Orchestra during its 2019-2020 season, before the pandemic. Photo courtesy of Jonathan Kirn

It has been an interesting year for the Milwaukee Symphony Orchestra.

The group’s main hall was undergoing a major renovation. And then, the coronavirus pandemic hit and made in-person concerts impossible.

So, this year’s season is something different — a series of concerts featuring chamber music and small ensembles who play while observing coronavirus precautions. Ticket holders can attend the concerts remotely, and even watch them again.

Earlier this week, WPR's Melissa Ingells spoke to acting concert master and violinist Ilana Setapen. Setapen has been in one concert already this season and is preparing for another on Saturday. It has been a difficult year, but she said there were some bright spots.

Ilana Setapen: I think the biggest bright spot has just been coming into the hall and getting to see it in person. We’ve seen so many pictures, and some of us saw it before they started the renovation, but no one from the orchestra — the musicians — had really been in here in over a year. So just getting to see it and see my colleagues react to how beautiful it actually is, is special.

Melissa Ingells: That’s right, there was the renovation and then a flood?

IS: Yeah, they had some flooding over the summer and so we got pushed back a little bit more. They’ve been through a lot here.

Where Is The Audience?

MI: With the virtual season, now you’re not just Milwaukee’s symphony orchestra but really the world’s orchestra. I mean literally anyone who buys a ticket can see you perform. Does that make the experience of performing any different for you?

IS: Maybe a little bit, but in some sense when we perform, we never know who’s going to be in the audience. So, it doesn’t change a whole lot, especially as we can’t really see who is watching. Our goal as musicians is just to get the best performance that we can.

It’s definitely more pressure to have cameras on you, I will say that, rather than to just do a live performance. Because you know, it's going to be memorialized forever. So, I would say that’s the biggest difference for us.

MI: Musicians tend to be in two camps — either the audience gives them nerves, or they get a lot of energy from the audience. And like you said, there’s a camera, and that’s different, and you don’t know who your audience is. How have people been dealing with that?

IS: I think people have been dealing pretty well. One of our biggest challenges has been less rehearsal time for chamber music. When you put a chamber music concert together, you would want more rehearsal because everything is more exposed, individually. And there’s a lot more detailed work that you could do as a small group.

And we’ve had actually quite a bit less rehearsal time than we normally would get even for a symphony program, because we’re limited to short amounts of time that we can be in the hall before they have to air it out. So, our rehearsals are limited to one hour. And even if we get three rehearsals, that’s still not a whole lot of time to put a big piece together. So, I would say that has been more of a challenge than adjusting to no audience.

MI: Tell me about the next concert you’ll be performing in.

IS: I’m performing in a concert this weekend (Saturday), which we’re currently in rehearsal for, called "Eight is Enough". And it’s got three pieces on it, two of which I’ll be playing in. One of them is the Mendelssohn Octet, which is an old standard favorite among chamber musicians that’s just one of the most fun things to put together and to perform. And the other piece I’m playing is a modern piece by a composer named Andrew Norman for eight virtuoso violins. It’s called "Gran Turismo" and it’s based on the video game of that name. It’s about cars, basically. It’s a whole lot of energy, it’s a whole lot of grit, and you really can hear the cars the full way through. It’s a really fun piece to play and put together. It’s going to be a really fun week.