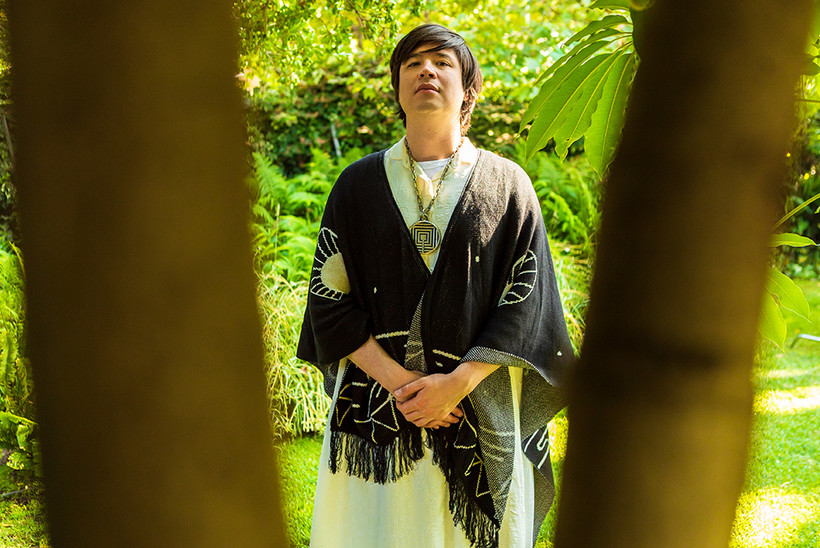 Musician Joe Wong was still roaming the halls of Wilson Elementary School in the Milwaukee suburb of Wauwatosa when he discovered a passion that still drives him today.

"I started playing drums when I was 11 and the drums felt like a vehicle into the world and also the medium through which I found myself," Wong told WPR's "BETA." "I can remember the first time I played drums with another musician and how incredible it felt and in some ways I feel like I've been chasing that feeling my whole life."

Wong would become an acclaimed drummer in the Milwaukee jazz scene and enrolled at the prestigious Berklee College of Music in Boston.

"I had already had some experience recording and touring and had found an artistic voice to a certain extent before I went to the school," Wong said. "Then when I went to the school, it made me question everything and subvert my own voice and absorb information from a lot of different sources and it was a bit overwhelming."

Wong would eventually leave Berklee after a few years — joking that "most people drop out of that school" — and return to Wisconsin where he secluded himself at a non-functioning farm in Chippewa Falls.

"I felt like I had gotten what I needed out of the school, and so then I kind of retreated to a farmhouse in Wisconsin to try to parse through everything and metabolize the information that I had gotten," Wong recalled. "I was basically trying to figure out what information that I had been exposed to in the past couple of years that I wanted to hold on to and develop and what I want to let go of. It was just a way of trying to find my center again."

Wong moved to Los Angeles and became an accomplished touring drummer for several acts. After a while, however, he was beginning to burn out on music and that creative joy the drums brought him at age 11.

While on tour with Marnie Stern (now of The 8G Band on "Late Night with Seth Meyers"), Wong bumped into friend and former Fugazi drummer, Brendan Canty, at a "Saturday Night Live" taping in New York. Canty had pivoted to composing for film and TV after Fugazi went on hiatus in 2003. The two of them ended up having a life-changing conversation.

"After the taping, we drank whiskey together, and I was just basically parsing through all of my neuroses with Brendan and trying to figure out how he built the life that he had. It occurred to me that could make for an interesting podcast," said Wong.

So, in 2015, Wong launched his podcast, "The Trap Set." It was ostensibly a drumming podcast featuring in-depth conversations with fellow drummers including drumming royalty like Phil Collins, Sheila E, Bryan Devendorf, Clyde Stubblefield and Janet Weiss. Wong would broaden the scope in recent years to musicians and comedians like Todd Barry and Fred Armisen who moonlit as drummers.

Around the same time Wong was launching his podcast, he reconnected with Kerri Drootin who was the music supervisor for NBC's "Parks and Recreation" who he had met a few years earlier while on tour with New York band, Parts and Labor. She let Wong know she was working on a new show for Netflix with Aziz Ansari called "Master of None" and encouraged Wong to demo for the series.

"At the time I was working with a partner who still lives in Milwaukee, Didier Leplae, and so we made some demos and Aziz and the other music supervisor, Zach Cowie, were really into what we were doing," said Wong.

Wong would continue to build an impressive resume of scoring some of the most groundbreaking and original shows to come out in the streaming era, including Natasha Lyonne's surreal Netflix hit, "Russian Doll."

It was watching Lyonne lead her passion project that inspired Wong's to really focus on his desire to create "Nite Creatures."

"I think it started percolating shortly before I scored 'Russian Doll' and it was really, really interesting to watch Natasha as she was making 'Russian Doll' because it was basically her first project as a creator," said Wong. "I got to see her confront all of the attendant insecurities that come along with making something for the first time and seeing her navigate through that was really instructive as far as how I pushed myself through it."

Wong enlisted Helium's Mary Timony as producer and said he got in the mindset of treating himself as the client. The result is grandiose, beautiful, melancholy and very personal. Wong wrote the album in the wake of his father's death and his grappling of that grief and processing it.

"My dad had a massive stroke in 2010 and I had to step in and help manage his life for a few years after the stroke. And ultimately, he never recovered, and so I saw him lose pieces of his personality over time and that's basically what the album is about. It's my way of working through that," Wong said.

The first single off the album, "Dreams Wash Away," is a stunning example of this sentiment and was used by Pendelton Ward and Duncan Trussell in the finale for their animated Netflix series, "The Midnight Gospel" which Wong also serves as the composer for.

"The final episode of the show, without giving too much away, is about confronting the mortality of self and of a parent and so it was kind of a perfect project for me at the time," said Wong. "Duncan, who co-created the show with Pen, was going through that when the conversation that structures the final episode was taking place. So, it was almost like one of those situations where it really felt like it was meant to be."

"Nite Creatures" will be available this summer from Decca Records and Wong is already planning a follow-up.

"I feel like I kind of just scratched the surface of what I want to do artistically with this first album," he said. "At the same time, I've developed this muscle of writing a lot of material from my career as a film and TV composer, so I'm trying to deploy that muscle in service of making another album right now."