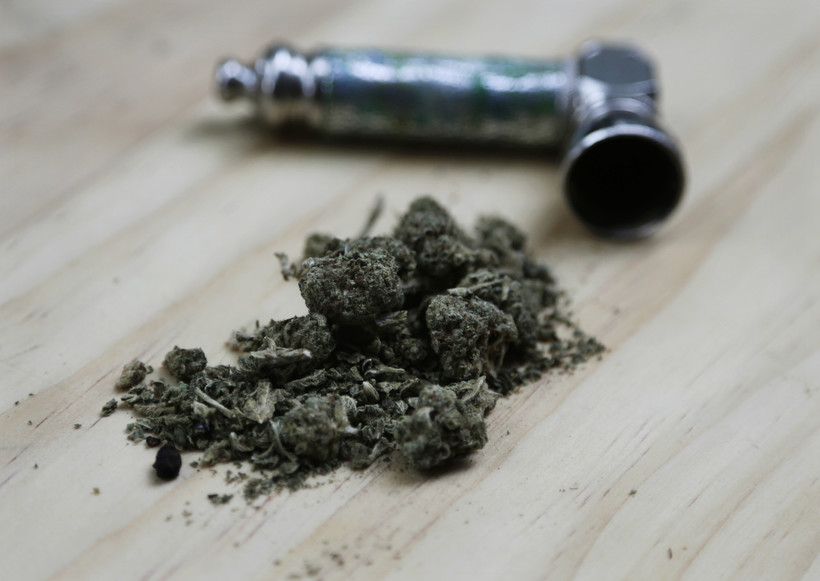 Marijuana and a pipe used to smoke it are displayed in a photo taken in New York on Wednesday, June 20, 2018. Peter Morgan/AP Photos

Black People Made Up 86 Percent Of Marijuana Arrests In Milwaukee In 2020
By Corrinne Hess
Share:

Milwaukee residents who consume or possess small amounts of marijuana on private property could soon do so without the risk of a ticket.

The Milwaukee Common Council will consider a change to its ordinance that would eliminate ticketing for those 21 and older in possession of less than 28 grams of marijuana.

On Thursday, the council’s Public Safety and Health Committee spent more than an hour discussing the change before deciding to hold the item to work out additional details.

For example, how close to a school someone can possess marijuana. Alder Chantia Lewis, who co-sponsored the legislation, suggested not within 1,000 feet.

Milwaukee has 322 private and public schools combined. A 1,000-foot radius would cover about 41 percent of the city, and in that area, the fine for possession would be doubled, said Eric Marsch, who heads Wisconsin Cannabis Activist Network.

After hearing this, Lewis said she wants to continue to tweak the legislation, since the intent is to keep people from being ticketed, not increase the number of tickets.

"Many cities and states across the country have enacted marijuana reform, and it is long past due for our city to do the same," Lewis said. "Countless studies show that racial disparities exist when it comes to marijuana convictions despite usage being equal across racial groups."

The full Common Council could vote on eliminating marijuana fines at their July 7 or July 27 meeting.

Several Milwaukee residents spoke in favor of the change, saying penalties for possession of marijuana targets Black and brown people.

Bethany Crevensten is biracial. She said she’s lucky, because she looks white. But her father is Black, and after being ticketed for marijuana possession, he was unable to go to college.

"I knew that no matter what, my dad smoked weed, but he was not a bad person," Crevensten said. "You guys have the opportunity to stop blocking the Black and brown community, but also stop blocking Milwaukee as a whole."

Eighty-six percent of the people arrested for possessing marijuana in Milwaukee in 2020 were Black, according to information obtained by WPR through open records.

In 2015, the Milwaukee County District Attorney’s Office implemented a policy to not prosecute non-violent individuals who possess 28 grams or less of marijuana.

During an interview with WPR in March, Milwaukee County District Attorney John Chisholm said after studying marijuana arrests and conviction data from his own office, the dramatic racial disparities became clear. He also said the city needed to focus on violent crime instead.

Milwaukee’s ordinance is modeled after the marijuana ordinance Madison passed in November 2020 that allows people over the age of 18 to consume or possess up to 28 grams on public property with permission.

In 2018, the city of Eau Claire reduced the fine for possession of marijuana to $1 for first-time offenders found with certain amounts of the drug. The change is meant to send a signal to state and federal policymakers that the city is deprioritizing enforcement of marijuana laws.

Lewis said she hopes what Milwaukee is doing will push the state Legislature into making marijuana legal.