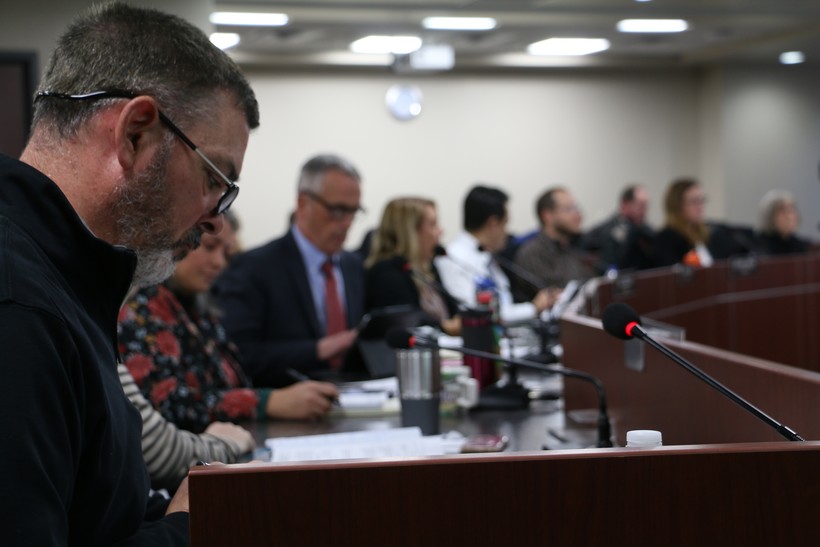 Eau Claire City Council members meet to discuss resolutions including a measure to reduce fines for possession of marijuana to $1 at a meeting Tuesday, Nov. 27, 2018. Rich Kremer/WPR

The city of Eau Claire has reduced the fine for possession of marijuana to $1 for first-time offenders found with certain amounts of the drug. The change is meant to send a signal to state and federal policymakers that the city is deprioritizing enforcement of marijuana laws.

In an 8 to 2 vote the council passed a resolution Tuesday night that reduced the range of penalties for possession of marijuana, which ranged from $100-$500, to $1 when the person is found with 25 grams or less of marijuana and it's their first offense. With court fees included, the cost of being arrested with pot in the city now totals $138.

"I think people are waking up and realizing that our laws around the possession of marijuana are outdated and harmful, and that as it is right now there are many people with many different reasons who see that there actually could be positives and benefits to changing those laws," Werthmann said before the council voted.

In all, 16 counties in Wisconsin approved referendums calling for the legalization of marijuana for medical or recreational use. Eau Claire city Councilwoman Kate Beaton said at Tuesday’s meeting it’s clear reforming marijuana laws is on people’s minds.

"For me the referendum that was voted on in the last election spoke very loudly," Beaton said. "Over half of our residents believe that marijuana should be legalized; and that’s a really important part of democracy to vote directly on an issue that we don’t often get."

He proposed an amendment to make the fine for marijuana similar to fines levied for residents caught with an open container of alcohol in their vehicles or while in public, which failed to pass. The fines for violating the open container ordinance range from $20-$200 dollars on top of court fees.

Weld called it bad governing to make fines for pot possession lower than those for alcohol.

"It is still against the law, and even if we legalize medicinal or recreational use, it’s still not going to be permissible to smoke a joint while you’re driving your car or walking down the street," Weld said. "So there will be a citation and I really, strongly believe that the citation should be equal to drinking a beer. They are equal, if not… I would say that a beer is not going to impair your judgment as much."

There was also a question of whether reducing the fines for marijuana possession would discourage participation in the county’s drug court diversion program.

"If it’s a dollar, a lot of the people may not think about that or they may not want to do the diversion program, and all of a sudden they do have a violation on their record," said Councilman David Strobel. He was the second vote against reducing the fines for marijuana possession.

The Eau Claire Police Department has weighed in on the council’s proposal to change the fee schedule for marijuana possession.

In a letter, Police Chief Gerald Staniszewski said in 2002, the city decriminalized possession of "personal use" amounts of marijuana, giving police officers the discretion to issue an ordinance citation, which isn't criminal, for first-time offenders who possess less than an ounce of marijuana instead of referring criminal charges to prosecutors.

Staniszewski said over the last 12 months, there were 410 marijuana investigations out of around 28,000 calls for service.

"As a general practice, the police department focuses its enforcement efforts on individuals who are selling drugs or using higher risk narcotics," wrote Staniszewski. "When an individual is cited or arrested for possession of marijuana, they were most likely involved in additional behavior which resulted in an officer’s attention (fighting, theft, OWI etc.)"