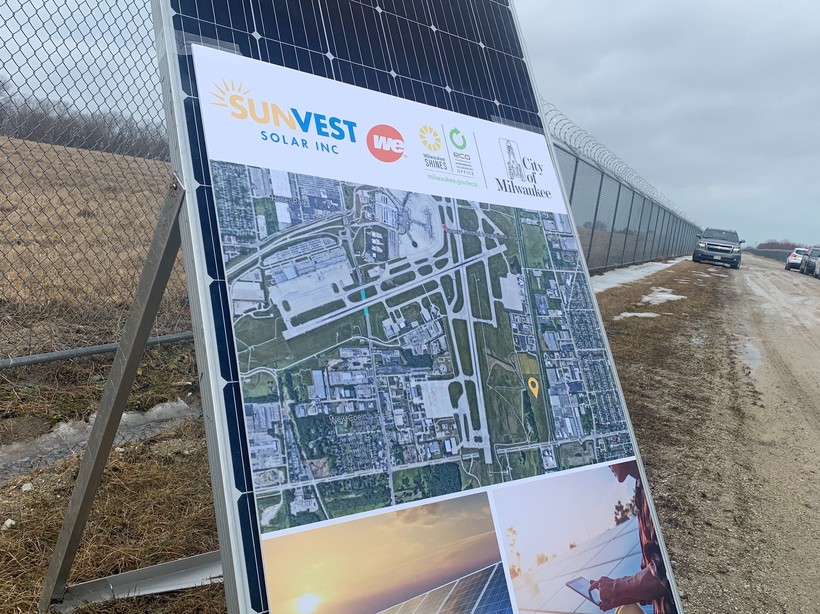 New Solar Field Will Have Over 7K Solar Panels
By Alana Watson
Share:

"This project is a real win for Milwaukee, for the planet and for national security," Milwaukee Mayor Tom Barrett said during the announcement at the field's future location.

The city is partnering with We Energies for the solar project — most of the electricity used in the city comes from the electric services company based in Milwaukee.

"We are honored to be a part of this," We Energies President and CEO Kevin Fletcher said Tuesday. "As we look at continuing to look at our cleaner energy future, this is one way to illustrate that."

We Energies created two new projects to help large customers, like the city of Milwaukee, get more of their energy from clean power. The programs were approved by the Public Service Commission of Wisconsin in December 2018.

One of those projects is the new 2.25 megawatt solar energy system in Milwaukee. The system will have over 7,000 solar panels and will be placed on a closed city landfill that isn't useful for other forms of development, according to Barrett.

The solar field is also next to 128th Air Refueling Wing of the Wisconsin Air National Guard, which is stationed at General Mitchell Air National Guard Base. The power of the newly announced field will also be used to help support the unit in emergencies.

Col. James Locke with the unit said the 128th is extremely pleased to be working with the city.

"Mission assurance, mission readiness only comes when we have energy available to us and this alternative energy project is going to provide just that for us," he said.

Locke said in an emergency, the ability to execute a mission is critical.

We Energies will build and maintain the system at no cost to city taxpayers.

Barrett said coastal cities like Milwaukee face threats due to climate change, such as floods and other extreme weather that damage property, supply chains and harm the economy.

"That's why it's so urgent that we reduce our use fossil fuels and accelerate new clean energy projects," he said.

In 2009, Barrett established a goal of getting at least 25 percent of Milwaukee's power from renewable energy by 2025. He said his administration is committed to growing the city’s economy while protecting the environment.

"This project provides documented progress toward the city’s renewable energy goals," Barrett said. "It will be enough electricity to power over 460 homes."

The announcement comes a week after another solar farm plan was announced in Kenosha County. The Kenosha County project is being built on roughly 1,500 acres and will be the state’s second largest solar farm. The largest, Badger Hollow, is in Montfort and will be completed in December.

Erick Shambarger, the city's director of environmental sustainability, said they hope to start construction this summer and finish by the end of 2020.