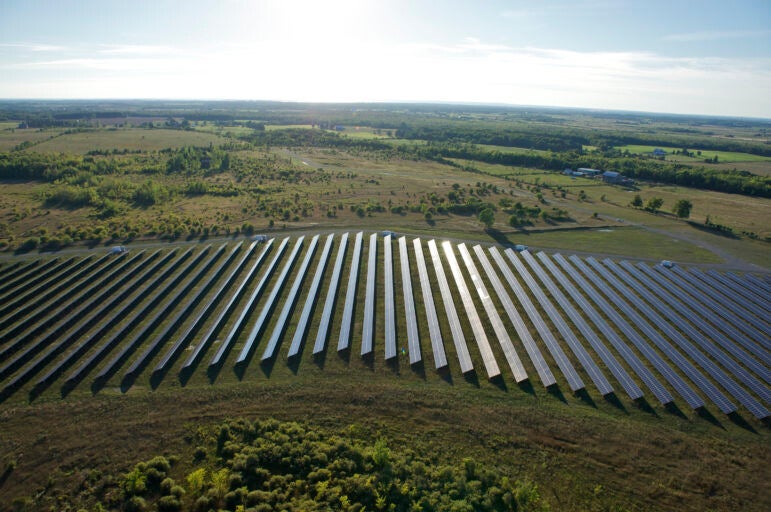 A massive solar farm is being planned in western Kenosha County that developers say could produce enough renewable energy to power 55,000 Wisconsin homes per year.

Invenergy, the Chicago-based company that developed the recently approved Badger Hollow Solar Farm in Iowa County, submitted an engineering plan on Feb. 20, to the Public Service Commission of Wisconsin (PSC).

This project, the Paris Solar Farm, would be a 200-megawatt development in the Town of Paris, a 35-square-mile rural community west of Intestate 94 at Highway 142.

There are about 20 solar farms in Wisconsin. By comparison, the largest one, Badger Hollow, will be about 300 megawatts when it's completed in December. But most solar farms are in the range of 1 to 5 megawatts of capacity, according to RENEW Wisconsin, a nonprofit organization that promotes renewable energy in Wisconsin.

A 1-megawatt solar farm produces enough electricity annually to offset the needs of about 190 average Wisconsin homes, according to RENEW Wisconsin.

Invenergy has acquired lease rights for up to 2,700 acres adjacent to Highway 142. The project is being built on about 1,500 acres, Crowl said.

John Holloway, Paris' town chairman, said the idea of clean energy is interesting, but he has some reservations.

Some of those consequences include the visual impact of the solar panels, Holloway said.

Holloway said there is also concern about how local roads will be affected and what will happen when the project is decommissioned.

"In their application, they admit in the United States there has never been a decommissioning of this large of a solar array, so they don't know how it will work," Holloway said.

"A solar panel is really made of common household items," Crowl said. "Glass, aluminum, copper, they are largely recyclable. We've been able to learn from how the wind industry has worked on recycling aspects, we'll recycle different parts of the panel and work with different third-party manufacturers to make sure the parts that aren't (recyclable) find a life after this."

Tyler Huebner, executive director of RENEW Wisconsin, said the state is behind in its solar energy and the Paris farm is a good opportunity to make more of its energy in the state.

"Especially in that part of the state where there are a few really big, coal-power plants," Huebner said. "Compared to no air pollution, no water pollution. This is a very benign way to create power when you have some very close coal plants."

Invenergy has met with Town of Paris officials several times over the last two and a half years. And they’ll continue to do so as plans move forward for the solar farm.

The PSC will review the application and collect public input.

Holloway said he still has mixed feelings about the project.

"We want to respect the desire by some of our land owners to participate in a lucrative land development," Holloway said. "Obviously the state of Wisconsin has taken the position that it wants to promote the use of solar energy as a means to provide energy. We specifically did our land plan over the years to protect open vistas, and agriculture lands and in my opinion this is not the use we were looking for."