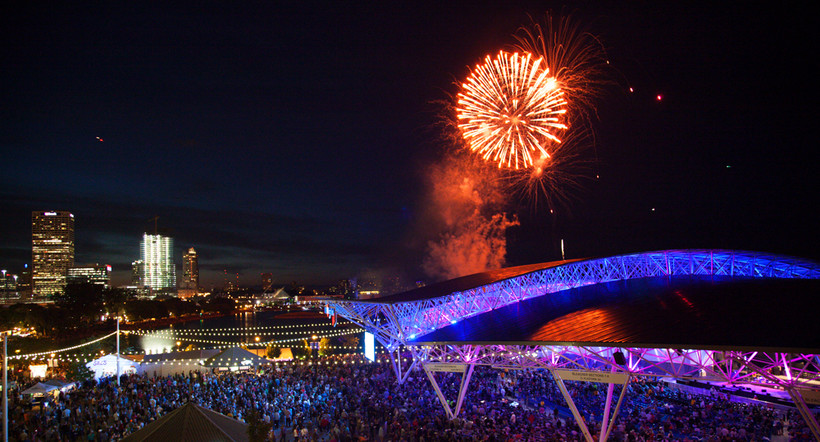 Fireworks over the Summerfest grounds.

When Milwaukee Mayor Henry Maier created Summerfest in 1967, he dreamed of a festival that would bring the community together. He was inspired by a trip to Oktoberfest in Munich and thought a similar event could also revitalize Milwaukee's downtown.

Fifty years later, about 850,000 people flock to the lakefront festival annually. They stroll the grounds of Henry Maier Festival Park, named in honor of the fest’s founder. A study conducted in 2013 found Summerfest has a $187 million economic impact.

One person who fell for Summerfest at an early age is Jordan Lee, program director of Radio Milwaukee. He grew up in Kenosha, and his father worked in the entertainment business, so Lee started going to Summerfest in the 1980s at a young age.

"Summerfest was an annual pilgrimage. We always went," Lee said. "I remember they would have the Kid's Days and I was in elementary school and you'd get ice cream and your face painted." Once he was a teenager, Lee and his friends would pile into a car, make the trek to Summerfest and watch bands play all day long. In his late teens and twenties, Lee started performing at the Big Gig with several bands, including the Milwaukee hip-hop group, the Rusty Pelicans. That group even opened up for some of Lee’s musical heroes, hip-hop legend Public Enemy.

"I have a Public Enemy poster in my office. I couldn't love that band more," Lee said. "As an artist, you have this experience where it's validated everything you've thought of as a performer. Think of singing in the mirror. We all did that as kids when we were trying to figure out if we'd be a rock star one day. I remember rapping to (Public Enemy's) Chuck D's lyrics and then opening up for him years later, it's a wow factor for me as an artist."

A number of Wisconsin artists will have similar experiences this year. Many local acts are opening for national touring artists, such as the dreamy dance pop group GGOOLLDD, R&B singer Lex Allen, and glam rockers Tigernite.

"This kid is 20 something and headlining a stage. That's a huge deal if he was a (Messmer) High School kid a few years ago," Lee said of IshDARR's Ishmael Ali.

"If you're not eating some corn and watching Pat McCurdy, you really didn't experience Summerfest," Lee said.

Lee says Summerfest provides an incredible platform for local artists, since they’re exposed to patrons who may be drawn by the fest for a national touring artist. "It’s an opportunity for local musicians to show that they've made it in their market," he said. "In the Milwaukee market, outside of playing a show at the Riverside Theater, there aren’t many options. That would be one of the only really huge gigs you could get in this market. Summerfest does that for lots of bands."

But Lee said the national acts validate the large scale of Summerfest and its importance not only in Milwaukee, but within the international music community.

"The ability for them to have those really, really big artists … it's the Rolling Stones, the Paul McCartneys, it’s huge," Lee said. "It's easy as a Wisconsin or Milwaukee resident to think of it as a fair. It’s something to go to, get corn and ride on the Sky Glider. You forget some of the biggest Grammy winning, Hall of Fame artists of all musical time have played at this festival, sometimes at the peaks of their careers."

And after Summerfest expanded some of its ground stages, like the BMO Harris Pavilion, it was able to fit bigger crowds for bigger acts. And organizers aren’t stopping there. Other stages have been revamped and expanded in recent years, including a renovated Miller Lite Oasis area unveiled this year. The Alabama Shakes perform at Summerfest in 2016. Photo courtesy of Summerfest

The musical acts at Summerfest remain diverse, but that doesn’t go without criticism. Over the years, some people have noticed a lack of Latino and rap artist performances. Lee said these shows can attract thousands of Milwaukeeans at other venues around town.

"It's two-sided, I see it from both angles," Lee said. "On the flip side of that coin is looking back historically and ask(ing), 'Has it really ever been embracing that and do those communities feel (Summerfest) is not for them? How does an organization as large as Summerfest put that invitation out to those communities?' I don't know. I would love to see that happen. I think its intention was to always do that, and I think in the spirit it is that way, but I'd love to go and ask those folks in those communities, 'Do you feel like Summerfest is for you?'

As Summerfest is celebrating its 50th anniversary, Lee reflects on its legacy.

"It's the largest music festival that's decades older than any large music festival. Lollapalooza probably would be the next in our region that's of any size or mold and that's been around about two decades," Lee said.

"This was founded by the people, for the people and I think that's what makes it sustainable," Lee said. "The Bonaroos and Coachellas of the world could start to implode on themselves. Look at what (Bon Iver frontman) Justin Vernon is doing with Eaux Claires and how its invigorating the northwoods of Wisconsin with something that's the anti-festival. Summerfest has always been that way. It's always been a little different than these big outdoor fests."

For its 50th anniversary celebration, its welcoming headliners to the American Family Insurance Amphitheater, formerly known as the Marcus Amphitheater, including Tom Petty, Migos, P!nk, and Luke Bryan. On the side stages, people can see acts like the Steve Miller Band, Fishbone, Tegan and Sara, and The Shins.

Favorite Summerfest Show: The first one that really made an impact on me was in the mid-1990s and seeing Filter. Remember they had that song "Hey Man, Nice Shot?" I think that was the first concert I went to without any parental supervision. That was huge for me.

Kendrick Lamar was also exceptional. That was right after "To Pimp a Butterfly" came out. That has been held as a quintessential album in the hip-hop genre

Geez, there's been so much, it's hard to think through them all… Stevie Wonder was incredible. I think it was in 2008. Super great.

Best Guilty Pleasure Show: Dave Matthews Band in the 1990s. That was a guilty pleasure. That's one of those ones now people would question, but it was like 1997. It was great. Person jumps in a splash pad on the Summerfest grounds in 2002. Photo courtesy of Summerfest

Most Surprising Show: You know where those usually happen for me? It's on the Rebel Stage, it's the little one on the lake. I find that those little ones over the beach, the Tiki Hut and the Rebel Stage, those ones always shock and amaze me because it's the most passion and unknown talent that has no industry around them.

There's no management group that's vying for them and saying, "This artist should be booked at a premium time slot." It's just kids that are really great musicians who are sometimes playing by themselves on the acoustic guitar and just plowing you.

Ground Stage Bleachers, Yay Or Nay: Psshhh... that's a really good question. Bleachers are a necessary evil. Without the bleachers, the inevitable stampede is just a couple of pushes away. I can't remember a time when I was in the crowd at a young age when I didn't feel a little bit nervous. I'm going to say yay on that.

Lawn Or Seats At American Family Insurance Amphitheater: Only because now I'm a crabby old dad I'm going to say seats. If you ask 23-year-old version of myself, I would have said lawn.

Are You A Dancer Or Sitter At Shows: I like to move and groove. I do.

Favorite Summerfest Food: I have to get corn from Robby's Roasted Corn stand. I also find that's something you can get and there's no greasiness involved. And then a Saz's sampler platter — you have to get a Saz's sampler. Eggplant fries (from Venice Club) are No. 3 on the list, for sure. My wife always goes there first.

Favorite Summerfest Beverage: It used to be getting a root beer from the root beer barrels, but that's not really what it is. Now, it's just a soda machine in a big beer barrel. I remember as a kid I felt like it was a little more special. Now it's probably going to the Water Street Brewery area and getting some kind of fancy-schmancy, hipster dad beer.

Favorite Way To Cool Down During A Full Day: Just go sit on the rocks and let that Lake (Michigan) breeze hit you in the face, under the trees, preferably.

Favorite Place To Hang And Rest For A Moment: Get on the Sky Glider. Just sit down for, what is the Sky Glider ride, like five minutes? Seven minutes from one side of the park to the other? I always go one way and I always plan it strategically. If we parked at the south gate, we'll get all the way to the north end then slowly work our way back.

Sandals Or Sneakers: Oh, sneakers. You cannot have open-toed shoes at Summerfest. Do. Not. Do. It. Two things on that: no open-toed shoes and as a father of three, I advise that you just don't bring strollers. Put them on your back and wear the kid. I had my son when he was really little and a cigarette went into his stroller and I was like, "Nope! Not doing it anymore." It was just too much.