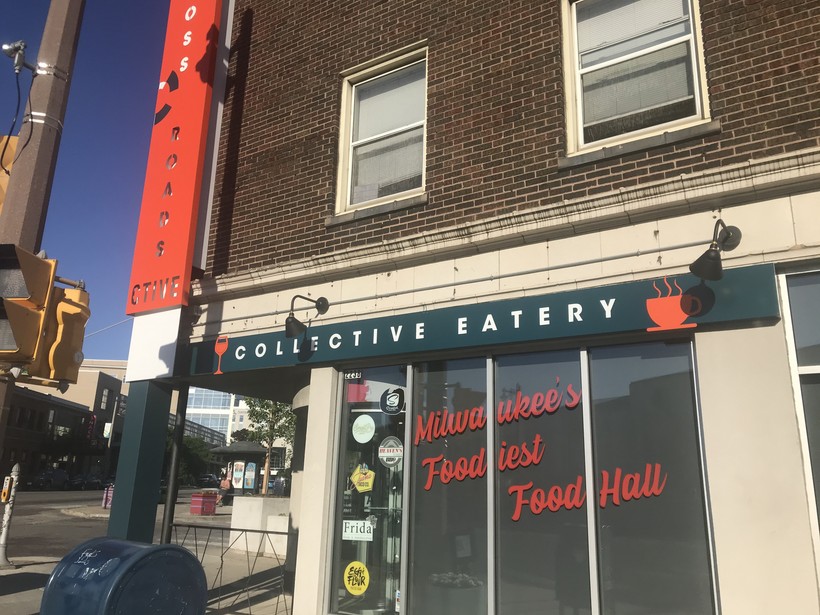 Crossroads Collective, a food hall on Milwaukee's east side, has doubled its patio seating to draw in customers who are more skittish about the risks of COVID-19 transmission indoors. Indoor seating capacity is capped at 25 percent when the city's bars and restaurants reopen Friday afternoon. Madeline Fox/WPR

Milwaukee Bars, Restaurants Can Reopen At Quarter Capacity On Friday

Establishments Can Also Open Up Patio Seating, Apply To Use Sidewalk And Street Space
By Madeline Fox
Share:

The city of Milwaukee has declared that bars and restaurants can start reopening at 25 percent capacity beginning Friday at 2 p.m., and can also open up outdoor service.

"I do it with some trepidation, because I don’t want people to get sick — and we know what can happen when people congregate too much," said Milwaukee Mayor Tom Barrett.

For many Milwaukee bars and restaurants, it’s a very welcome update after months of curbside carryout and delivery only.

"A lot of the customers have been just begging us to reopen," said Steve Schmich, co-owner of McBob’s Bar and Grill and its sister bar and restaurant, Tusk. "We’re very, very happy (the city) made that decision."

Schmich said he’s already been making calls to staff, arranging tables and preparing to start welcoming customers to their patio and indoor seating area right at 2 p.m. Friday. He said they’ll keep the to-go business up and running, so customers who are still worried about dining in can continue to grab curbside pickup.

He said they’re still working out the details for Tusk, which would only be able to seat about 10 people under the 25 percent capacity guidelines.

Restaurants will also be able to more easily apply to use streets and sidewalks for outdoor dining under the pilot program Active Streets for Businesses. It suspends code and permit requirements, and waives fees, allowing for the city to expedite approvals.

At Crossroads Collective, a food hall near the city’s Lower East Side, vendors and managers had been anticipating a partial reopening, according to marketing manager Tim Gokhman. They’ve removed some of the tables, put up plastic guards in front of vendor stalls, put up signs encouraging social distancing and implemented a system for ordering by phone.

"We’ve been ready," he said, "but we probably won’t open until early next week, to finish prepping details and signs on tables and QR codes (for phone ordering), et cetera."

Gokhman had been pushing for the outdoor seating expansion, which he said will be critical to attracting customers — many of whom, he said, will be much more comfortable dining outside than sitting inside, even with social distancing measures.

"That’s really the only way I see restaurants being able to mitigate the loss of tables inside," he said. "Even if you had more than 25 percent capacity inside, I don't think enough people would feel comfortable enough dining inside to justify it."

He said the Crossroads Collective has doubled the size of their patio accordingly. Under the new rules they can seat up to 57 people indoors, down from usual 231, and up to 40 outside. He said they’re hoping to make up for not being able to operate at full capacity with carryout.

"I think that’ll be the really big question, is how do the new percentages break down?" he said. "Right now, I think that everybody just has to keep in mind that it’s such an unusual situation, and both customers and restaurant owners have to be patient and open-minded about how this is going to work."