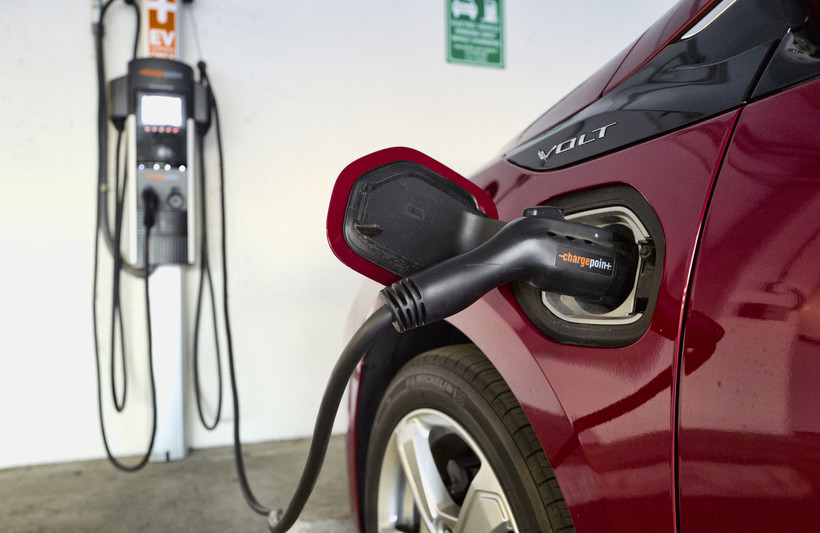 Wisconsin is set to receive nearly $79M over the next 5 years to expand electric vehicle charging stations
By Danielle Kaeding
Share:

Wisconsin is set to receive nearly $79 million over the next five years to expand electric vehicle charging stations through the federal bipartisan infrastructure law. Now, state policymakers are tasked with developing a plan by August to expand access as the auto industry and utilities rapidly move toward an electrified transportation system.

Policy issues facing electric vehicles and the state’s transportation system were the focus of a panel discussion held Tuesday by the Customers First Coalition that was broadcast on WisconsinEye. The panelists included representatives of utilities, automakers, road builders, energy advocates and Wisconsin Transportation Secretary Craig Thompson.

"We are looking at major increase in the amount of electric vehicles that will be on the road," Thompson said. "From my standpoint, it's incumbent upon the public sector to be ready for that, and to be able to support that on behalf of Wisconsin's economy and the nation's economy."

The Edison Electric Institute estimates there are more than 2 million electric vehicles on the nation’s highways. That makes up less than 1 percent of the roughly 276 million vehicles on the road, according to most recent federal data. Wisconsin had 7,521 registered electric vehicles last year, and that number has grown an average of 9 percent each year from 2016 to 2020.

Automakers like General Motors have vowed to phase out sales of vehicles running on gas and diesel by 2035. President Joe Biden has set an ambitious goal for half of all new vehicles sold to be electric, hybrid or fuel cell electric by 2030 as part of larger efforts to cut carbon emissions. Transportation accounts for the largest share of heat-trapping greenhouse gas emissions that contribute to global warming.

Thompson said Wisconsin must submit a plan to the federal government by early August on how the state plans to spend that funding. States must show charging stations are installed at least every 50 miles and 1 mile off every exit on major highways designated as an alternative fuel corridor. Wisconsin currently has around 400 charging stations.

"To support and facilitate long-distance trips and overcome range anxiety, we are committed to establishing a network of publicly accessible charging stations," Thompson said.

As part of that, Thompson highlighted only utilities can directly sell electricity. Thompson said the state needs to address which entities can deploy electric vehicle charging stations and whether they can charge by the kilowatt-hour.

A pair of bills sponsored by Republican lawmakers in the last session aimed to expand electric vehicle charging by allowing private businesses and local governments to own charging stations and sell electricity to drivers. They also would have allowed billing by either the time it takes to charge or the amount of energy used.

But, amendments to the bills would have barred local governments from owning or leasing charging stations, and they would only allow stations that charge for electricity from utilities rather than solar installed on site. The bill failed to pass amid disputes over those changes.

"I do think that's something that we're going to have to solve, because I think the preponderance of this is going to be done through the private sector with government funding and financing," Thompson said.

Everyone should be able to build electric charging infrastructure, said John Fisher, state affairs director with the Alliance for Automotive Innovation.

"We don't have the luxury of picking and choosing who should build where and things of that nature," Fisher said.

"Many states have addressed that because it is a barrier to electrification," said Erwin. "We can address that. We can address it in a straightforward manner, and we just need to set aside some of those differences."

Republican Sen. Julian Bradley, who chairs the state Senate's utilities committee, said in opening remarks that electric vehicle issues are complicated. He added that lawmakers owe it to their constituents to "get it right."

"As we tackle electric vehicles next session, I hope there's a lot more consensus among my colleagues and stakeholders, because these issues aren't going away," said Bradley.

As Wisconsin transitions to electric vehicles, the shift brings questions about how to do so in the most equitable way and maintain revenues for the state’s transportation fund that relies on motor fuel taxes, vehicle registration fees and driver license fees. As gas-powered vehicles grow more efficient and more electric vehicles are adopted, that’s likely to decrease revenues through the gas tax as people need less fuel.

"Obviously, with EVs coming more and more on the scene, we may need to either revisit that whole idea whether we want to fund transportation via a user fee system," Thompson said.

Wisconsin created a $75 fee for hybrid vehicles and $100 fee for electric cars in 2017 to help offset any loss.