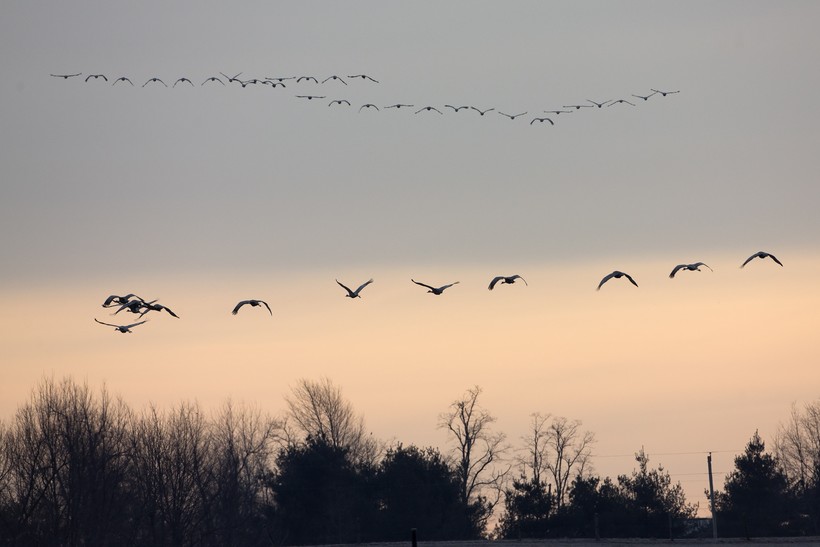 In this Friday, Feb. 6, 2015 photo, sandhill cranes leave the area in small groups after they gathered at a roosting location for the night along their winter migration route in Cecilia, Ky. These birds, which are part of the eastern population of sandhill cranes, are part of a group estimated to be larger than 70,000 birds, many of which were wintering in Florida. David Stephenson/AP Photo

As millions of birds migrate across the state, our windows pose a threat

In the next few months, hordes of birds will cloak Wisconsin's skies each night as they head south for winter. Last Tuesday night, more than 48 million birds flew over the state — the peak of this migratory season so far — soaring up to 2,600 feet high.

"The months of August, September and October are a period in which there's a really rapid transition in the avifauna of Wisconsin," said Stanley Temple, a University of Wisconsin-Madison professor emeritus who specializes in birds and wildlife conservation. "Some birds that spent the summer with us are leaving for the winter. Some birds that bred further north during the summer are passing through on their way to wintering grounds further south."

But as they fly through the state's cities and towns, he said, these birds face a surprising threat: windows.

"We're becoming more and more aware of how all sorts of human developments can pose real challenges for migratory species," Temple said

According to the U.S. Fish and Wildlife Service, building glass kills an estimated 599 million birds each year on average — second only to cats.

"Running into handmade obstacles, like towers and buildings, especially those that have confusing lights on them, results in mortalities as these birds crash into these structures and die," Temple said.

That's because birds are drawn to the lights inside and outside the buildings, said Chuck Hagner, the director of Bird City Wisconsin. The organization recognizes towns and cities in the state for becoming more bird-friendly.

"(Birds) will circle a building or source of light for a long time until they become exhausted," Hagner said. "And then they might fall prey to a different type of predator, or they actually make contact with the building."

The root problem, Hagner said, is that birds don't understand glass, and they don't see it as a barrier.

"Birds evolved over millennia to an essentially building-less environment, and as a result, they're a little bit different than we are in the way that they perceive glass," he said.

If a bird sees a reflection of open sky or greenery, he said, they don't understand that it's not real and might fly directly into the glass. A particularly harmful building design is glass "tunnels," Hagner said — when two panes of glass sit across from each other. Because the birds can see straight through, they often try to fly straight through.

But Hagner said the issue is solvable, and many cities in Wisconsin are already chipping away at it.

Individuals can make their homes safer, he said, by putting dots or lines on the glass, so birds see it as a barrier, or by closing their curtains at night.

Some cities across the country have launched "Lights Out" programs, convincing building owners to turn off lights when birds are migrating, and the Wisconsin Humane Society has been making similar efforts in Milwaukee.

All efforts to make the world more habitable for birds are crucial right now, said Ryan Brady, a conservation biologist at the Wisconsin Department of Natural Resources.

"Recent studies documented a 3 billion bird decline in breeding populations on our continent," said Brady. "That was in about a 50 year timespan."

It's not just buildings, he said, but the loss of habitat in general. As humans build more and more structures and raze habitats for agriculture, Brady said, birds have fewer places to stop on their migration routes to rest and eat. So as the human population grows, he said, the world is becoming increasingly inhospitable for most birds.

"Birds are an integral part of the world around us. They're so important to us, from having ecological functions to economic impacts," Brady said. "And certainly emotionally, I think everybody loves hearing birds sing, or seeing that hummingbird at the flowers in their garden, or getting a peek at a cardinal as it flies by in those bright red colors."