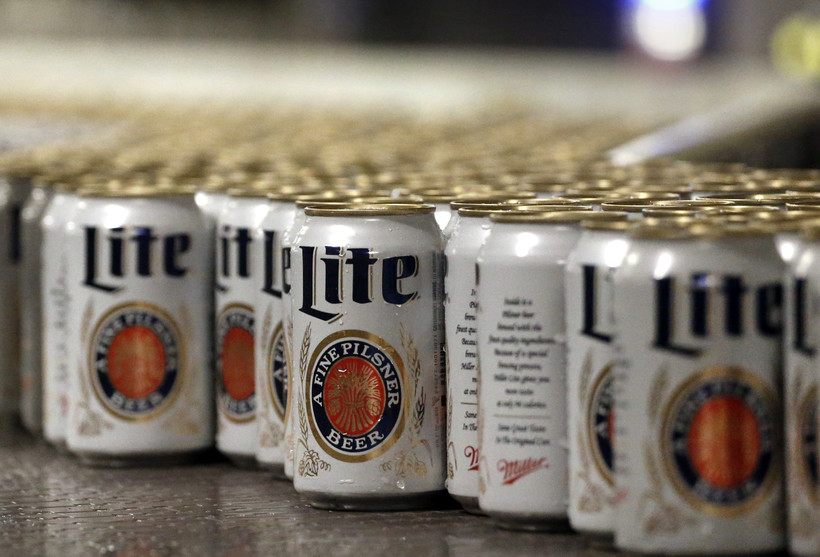 In this March 11, 2015 file photo, newly-filled and sealed cans of Miller Lite beer move along on a conveyor belt, at the MillerCoors Brewery, in Golden, Colo. Brennan Linsley/AP Photo

Company Will Drop MillerCoors Name As Part Of Consolidation
By Alana Watson
Share:

The parent company of MillerCoors LLC is moving corporate jobs to Milwaukee as part of a consolidation and restructuring plan.

Molson Coors announced Wednesday it is closing its Denver office and changing its name to Molson Coors Beverage Company, effective Jan. 1. The MillerCoors name will be retired.

The company is downsizing its corporate structure to create a more streamlined organization. It plans to reinvest $150 million into the business annually and to expand its brand beyond beer.

They will be pursuing opportunities in hard coffee and canned wine, as well as putting money behind other brands like Blue Moon Light Sky and Arnold Palmer Spiked.

Support jobs from offices around the country will now be based in the Milwaukee office at 3939 W. Highland Blvd. Those jobs include information technology, supply chain, human resources, finance, and legal. But the number of jobs coming to Milwaukee isn’t yet known.

"It's too early to say exactly how many jobs will be coming to Milwaukee," said Marty Maloney, manager of media relations for MillerCoors. "It will be a net gain but at this point it is too early to say."

According to the company, 400 to 500 employees will lose their jobs worldwide.

Molson Coors President and CEO Gavin Hattersley said the changes will help the company move faster and free up resources to invest in its brands and other capabilities.

"Our business is at an inflection point," Hattersley said in a statement. "We can continue down the path we’ve been on for several years now, or we can make the significant and difficult changes necessary to get back on the right track."

Miller Brewing was founded in Milwaukee in 1855. It formed a joint venture with Coors Brewing Company in 2008.

Milwaukee Mayor Tom Barrett said during a press conference Wednesday he is pleased Milwaukee is a part of Molson Coors.

"Brewing is a big part of Milwaukee's economic history," Barrett said. "It is also a major element in our economic future, so I am very happy Miller and Molson Coors is growing here in Milwaukee."