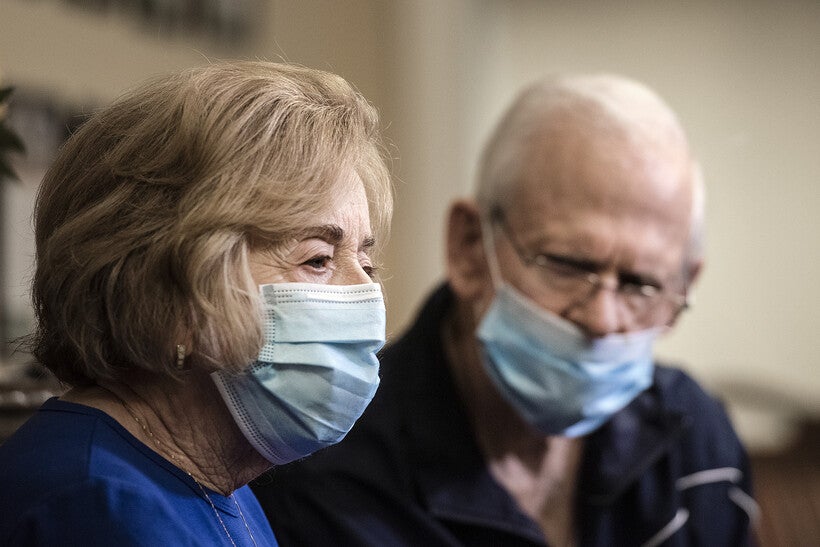 Carol and John Rowlands speak to reporters after receiving the first dose of a COVID-19 vaccine Wednesday, Feb. 3, 2021, at Touchmark in Appleton, Wis. Angela Major/WPR

With Memories Of Polio Epidemic, Appleton Couple Reflects On Power Of Vaccines After Receiving COVID-19 Shots

Wednesday was a monumental day at Touchmark on West Prospect.

For John and Carol Rowlands, both age 79, getting vaccinated against COVID-19 was an easy choice.

"It seemed like the right thing to do, not just for us but for anybody we might come in contact with," she said. "I hope great numbers of people make the same decision."

While John's career took the couple to California, New York and Chicago, they're both originally from Wisconsin and they returned in retirement, he said. Carol grew up in the Fox Valley and remembers when the polio epidemic wreaked havoc on the community in the 1950s. She was about 10 at the time.

"It was the most boring summer I ever spent in my life," she said. "We could not even set a foot outside the yard." 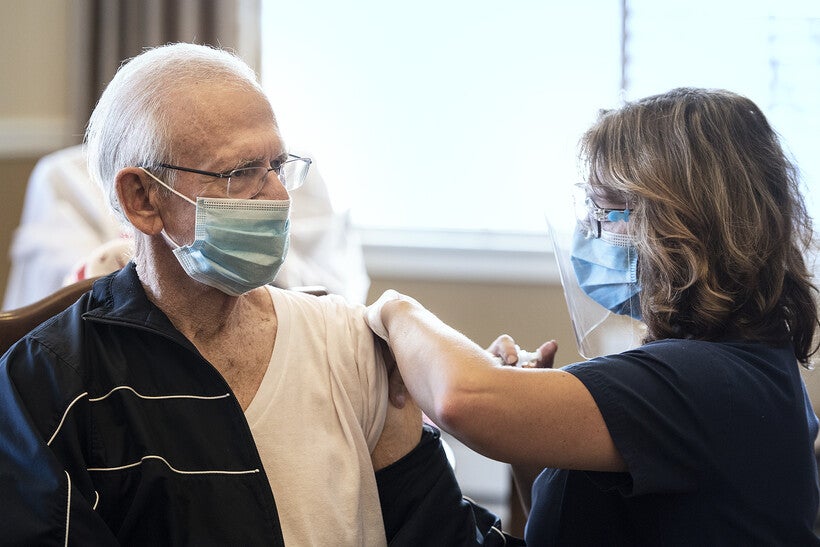 John, who grew up in Chippewa Falls, recalls that swimming pools were closed because it was thought they helped spread the virus. Both the Rowlands have friends who suffered from polio as children. The coronavirus pandemic has brought back unpleasant memories for them, John said.

Throughout their lives, the couple has seen firsthand the power of vaccines, Carol said. And not only when it comes to polio, which has been nearly eradicated despite setbacks last year related to the coronavirus pandemic. She remembers the quarantine sign her family placed on its porch.

While John said health choices, including vaccination, shouldn't be taken lightly, he noted his own family was supportive of the couple's decision to get their first COVID-19 shots Wednesday. They have family in Oshkosh, Appleton and Menasha, and they're looking to seeing them more when it's safe, Carol said.

Buchanan, the executive director, also received her first shot Wednesday. She said everyone at Touchmark is eager to return to some sort of normal.

As of Wednesday, more than 600,000 doses of vaccine had been administered in Wisconsin. It was a busy scene at the senior living community, with masked residents and staff members streaming in to get their shots.

Across the country, more than three-quarters of residents at long-term care sites have chosen to be vaccinated for COVID-19, according to new data from the Centers for Disease Control and Prevention. But just 38 percent of staff members opted to receive an initial dose. 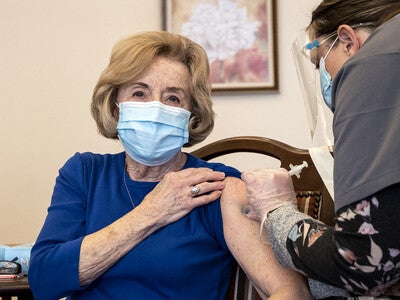 Carol Rowlands is vaccinated with the first dose of the Moderna COVID-19 vaccine Wednesday, Feb. 3, 2021, at Touchmark in Appleton, Wis. Angela Major/WPR

"I think our residents come from a time where vaccines have been developed over the years. And they're good," Buchanan said. "They know that it leads to a good future, and staff, I think, hears information from so many different sources. They aren't quite sure what's real and what's fake and what to believe and what not to."

On Tuesday, Julie Willems Van Dijk, deputy secretary of the Wisconsin Department of Health Services, said she expects many staff members will choose to get vaccinated at follow-up clinics after seeing that colleagues and residents experienced no negative reactions. Buchanan agrees.

After receiving the vaccine Wednesday, Cindy Cook, 79, said it felt just like a flu shot. She and David Cook, her partner of 55 years, said they felt relief.

They have family in Newfoundland, Canada, where life has largely returned to normal thanks to proactive management of the virus. Their granddaughters are even singing in choirs, Cindy said. Both former educators, Cindy and David said they imagine it’s been difficult for teachers and students amid the pandemic.

Beyond wearing masks, David said it felt rewarding to do something to help stem the spread of COVID-19 by getting vaccinated.

"This is something we've been looking forward to for quite some time. It's an important step," said David, 82.