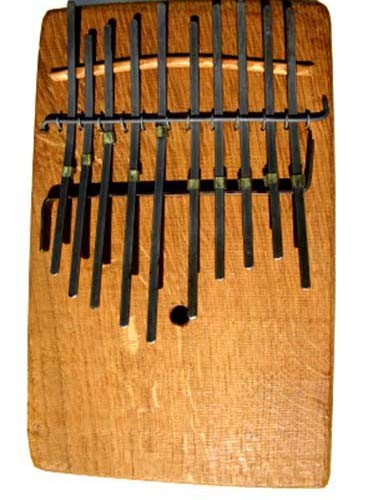 The Mbira or African thumb piano (other identifying names include: kalimba - contemporary term; the most popular term is either sansa, or mbira) is a percussive instrument originating from Africa. The instrument, also used in Cuban music, is generally held with both hands and played with the thumbs. The physical features of the instrument include a wooden sound box, attached on the face are flexible metal or bamboo keys (also called tines or reeds) of varied lengths which give each specific pitch. Performers pluck or stroke the keys with the thumbs. The sound is quite pastoral and reflective of region traditions and nuances in shape and size. The instrument is minimally enhanced or amplified by the sound box or chamber which has a sound hole in the middle of the box. The instrument can be purchased from commercial vendors with separate ranges for soprano, alto, tenor and bass. Another African instrument, the lamellophone includes similar features attached to the face of a wooden plate or wooden bowl which serves as a sound amplifier.