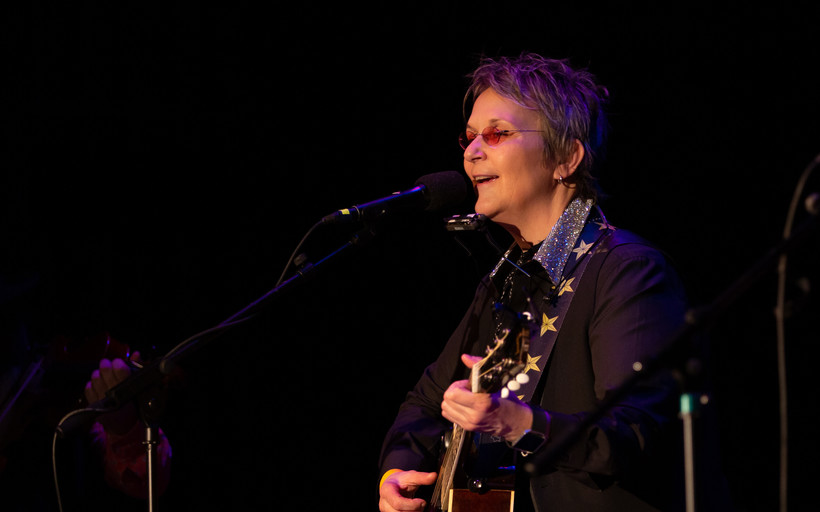 'Rifles And Rosary Beads' Disc Was Recognized For Its Powerful Songs
By Dan Robinson
Share:

When Mary Gauthier released her 2018 album, "Rifles & Rosary Beads," she really wasn't sure how it would be received.

"To be honest with you I had a feeling it was going to either be very well-received or resoundingly ignored," Gauthier said, "And I didn't know which way it would go."

Gauthier performed at the 2019 Simply Folk Shindig, and before the concert she sat for an interview where she talked about the album and her experience working with veterans and their families whose stories she helped tell in the album's songs.

Songwriting with Soldiers is an organization that partners veterans and their families with songwriters. Over the course of a weekend retreat, the participants share their stories, and the songwriters help turn those stories into songs. It was from these retreats that Gauthier put the songs together.

The stories and songs flow out of their experience of trauma from war, Gauthier said.

"It’s something that, historically, soldiers don't talk about. Our veterans generally aren't discussing these things. And so through the organization Songwriting with Soldiers, I've been given the privilege to carry their stories, the real stories in their words," she said.

As a songwriter, Gauthier doesn’t focus on the specific of each individual’s story, but adapts it to make it universal, while staying true to the original person and story. And it’s that universality that makes the song so powerful.

"Because when the song is done," Gauthier said, "the people in the room rush up to him and hug him with tears in their eyes and say the magic words: 'Me, too. Me, too, man. Me, too.' And that is the transformative moment and I live for that as a songwriter myself with my own songs and stories. But to see it happen with veterans is a powerful thing."

The trauma that Gauthier encountered on these songwriting retreats dealt with more than violence from war. She also heard the stories of female soldiers who suffered sexual violence.

"Every female soldier I've worked with so far has dealt with military sexual trauma," Gauthier said. "I've been doing this for six years. I've worked with dozens and dozens of female soldiers. Every one of them has dealt with sexual assault by members of their own battalions. I mean, they're under siege by people in the same uniform which is horrific, and the military needs to do something about it. And so far there's not much; there's not much. There's no chain of command that's not blocking the story."

The impact of these stories and songs go beyond the soldiers and family members who tell them. They give a little bit of insight to the listener who has never experienced trauma from military service.

"I know enough now, having worked with veterans for six years, to know that civilians are pretty uncomfortable talking about this subject matter," Gauthier said. "Americans are really big on saying 'Thank you for your service.' But the next sentence doesn't come easily to our mouths."

"So, I'm thinking I'm either going to be answering some questions with these songs that civilians want answers to or I'm going to be shoving their face into something they really don't want to talk about," Gauthier added. "And I had no idea which way it would go. God bless the listeners for being willing to be curious and keep an open mind around these songs because the stories are hard to hear. What war trauma is, is nothing like what we see in the movies."