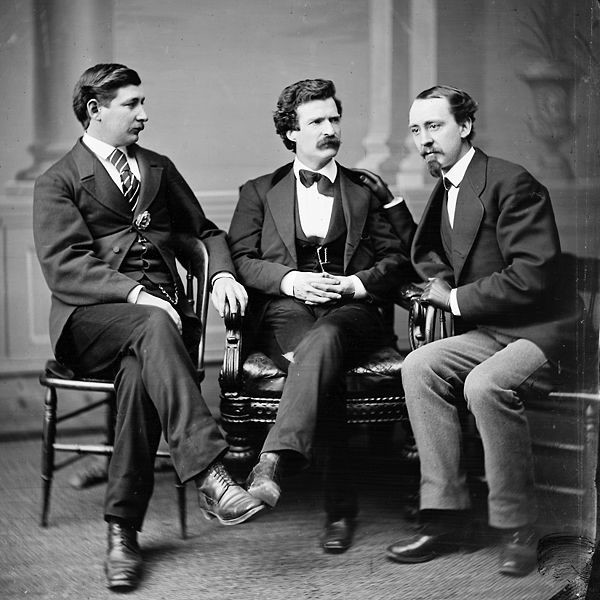 Samuel Clemens, better known as Mark Twain, was born this week in 1835 in Florida, Missouri. The writer picked up his moniker while piloting steamboats (it’s a boatman’s call for the minimum depth — two fathoms — necessary for safe navigation) and used it for the first time in a humorous travel letter he wrote in 1861.

Twain was already well known when he traveled to Wisconsin on a lecture tour in the winter of 1884-85. He had a book coming out soon, the future-bestselling "The Adventures of Huckleberry Finn," and had learned that lecturing was a great way to promote and sell books. He was joined on his tour by writer George Washington Cable, well known for his stories of Creole life and New Orleans. The two were billed as "The Twins of Genius."

Twain and Cable took the stage more than 100 times in 80 cities, including Janesville, Madison, La Crosse, and Milwaukee. Audiences loved them. Twain varied his readings but usually shared selections from "Huck Finn" as well as "The Jumping Frog," "The Awful German Language," and his closer, the ghost story "The Golden Arm."

At the opera house in Janesville in January 1885, a crowd turned out despite the chilly weather. The Daily Recorder reported that Twain "never smiles when telling a story that causes his audience to laugh until the tears trickle down their cheeks, but on the contrary, pulls his iron gray mustache and scowls."

Twain’s demeanor on stage, as well as his physical appearance, was frequently commented on. The Janesville newspaper concluded Twain and Cable, "are both stars of no little magnitude in their specialties, and wherever they go they will be gladly welcomed."

The next night, at a Methodist church in Madison, The Madison Democrat reported Twain and Cable kept the crowd "in a continual roar." A return trip to Madison the next week yielded a rave review from The Wisconsin State Journal, as well as an extended physical description of both Cable and Twain:

"Mr. Clemens, or Mark Twain, is a finely constituted man, whose weight is probably about 160 lbs … his face is an admirable one. The features are all strong and masculine … While giving his readings, Twain, as he is better known, stands carelessly, with his left hand in his pantaloons pocket, while his right hand has an amusing habit of playing with his mouth, as in the case of some awkward, overgrown boy."

Twain had another, earlier encounter with Wisconsin. In the late 1860s, a Milwaukee woman named Sarah Maynard was visiting a friend’s summer house on the east coast when she met Twain. She was unfamiliar with his work but her friend’s father assured her that Twain would be "one of the great men — one of the greatest." Maynard soon found herself teaching Twain to play croquet, the great gaming obsession of the time.

"His shots were wild," she wrote, "The strategy of the game did not appear to him." A few days later, when Maynard announced that she was going home the next day, Twain "assumed a look of comic woe" and declared, "Do not go away, little girl, for if you do I shall never be able to win another game of croquet."