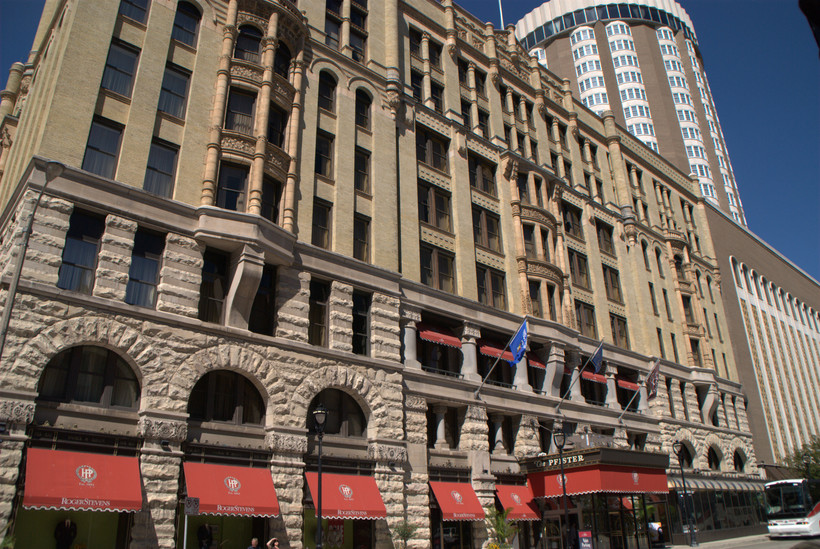 Many ghost stories take place at the Pfister Hotel in Milwaukee. Ed Bierman via Flickr (CC-BY)

Marcus Corp. To Lay Off More Than 400 In Milwaukee, Elsewhere

Marcus Corp. will permanently lay off 425 workers at hotels in Milwaukee, Madison and Lake Geneva as the coronavirus pandemic continues to affect the tourism industry.

Workers will lose their jobs at the end of July, when a federal aid package adding $600 to weekly unemployment benefits is set to expire.

According to notices filed with the state, a large portion of the layoffs — 211 — will come from the Hilton Milwaukee City Center in downtown Milwaukee. Marcus Corp. is planning to reopen the hotel July 12.

Marcus and other downtown Milwaukee hotels would have benefited greatly from the Democratic National Convention in August, but the convention's organizing committee said last week that the event will be mostly virtual due to the pandemic.

"Unfortunately, the coronavirus pandemic has negatively impacted our ability to maintain normal business levels, thus our ability to retain our entire staff," the notice states.

Eighty-nine people from the Pfister Hotel and 42 people from Saint Kate the Arts Hotel, both of which are in Milwaukee, will be laid off.

In Madison, the Hilton Madison Monona Terrace will lay off 40 people.

The chain will also lay off 23 workers at the Grand Geneva Spa & Resort and five people at Timber Ridge Lodge & Water park, both in Lake Geneva.

Thirteen additional layoffs will be at the corporate headquarters in Milwaukee, as well as one at the Safe House restaurant and one at its linen company.

Marcus Corp. accepted $11 million in federal Paycheck Protection Program in April. At the time, the company said it would keep up to 1,500 employees on the company’s payroll for up to three months.

The federal paycheck protection program was created to boost small businesses with fewer than 500 employees during the coronavirus economic crisis. As of June 20, 82,715 Wisconsin companies had received PPP loans that altogether totaled $9.8 billion, according to the Small Business Administration.

While some large companies and franchises received funding in the first round of the program, guidance was released in May specifying that if a business has access to capital elsewhere, they shouldn't apply to the program.

After receiving a new $91 million bank loan in April to help Marcus deal with the economic effects of the COVID-19 pandemic, CEO Greg Marcus told the Milwaukee Journal Sentinel he did not intend to return the PPP money.

The company would not respond to questions about the PPP money on Monday.

In a statement, company spokesperson Erin Levzow said since the pandemic started, Marcus hoped layoffs would be temporary, but the company has since had to re-evaluate staffing needs.

"The well-being of our associates is of utmost importance. We are providing assistance to our affected associates at our owned hotels, including severance based on their length of service. As we focus on the future, we hope to re-hire as many associates as possible when business levels return," the statement says.

The Marcus Corp. theater division is the fourth largest in the United States. The company currently owns or manages 1,110 screens in 17 states. Marcus Hotels & Resorts owns or manages 19 hotels in eight states. Levzow would not say if there will be layoffs in other states.

Editor's note: This story was updated to include additional layoffs listed in state documents.