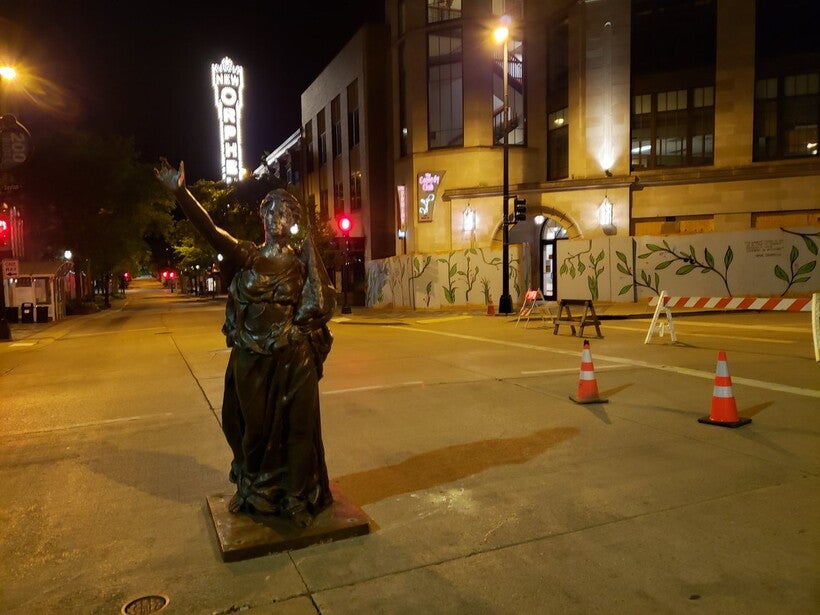 Forward statue stands on State Street after being removed from its pedestal during the early morning hours of Wednesday, June 24, 2020. Shawn Johnson/WPR

A man whose arrest sparked outrage and helped fuel protests in Madison where a state lawmaker was injured has been sentenced in federal court.

Johnson was arrested June 23 after walking into two businesses a day earlier on the Capitol Square with a megaphone and a baseball bat. His arrest occurred during nationwide protests against the death of George Floyd, a Black man who died after Minneapolis police officer kneeled on his neck.

According to prosecutors, Johnson threatened to break the windows at one restaurant unless the owner sent him money through Venmo. At the other restaurant, Johnson and two others demanded free food and said they would bring hundreds of protesters to burn down the business.

Following Johnson's arrest, protesters gathered at the Capitol for a demonstration that turned violent. Democratic state Sen. Tim Carpenter was punched and kicked in the head after recording a video of the protests on his cellphone. Protesters also pulled down two statues on the Capitol grounds. The statue of Forward, which represents Wisconsin’s motto, was toppled and a statue of Civil War-era abolitionist Col. Hans Christian Heg was thrown into Lake Monona.