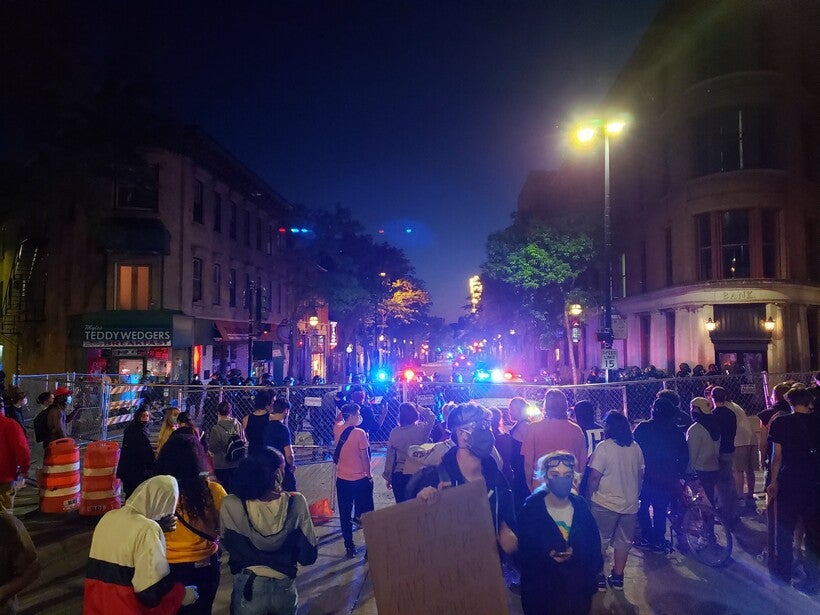 By Saturday evening, what had been a peaceful gathering turned into a chaotic scene. Police in riot gear fired tear gas and clashed with roughly 150 protesters who threw objects and broke store windows along State Street. Shawn Johnson/WPR 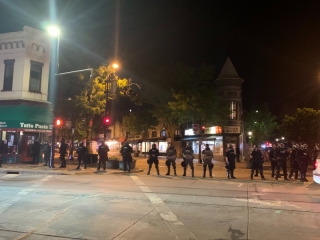 Thousands gathered for demonstrations Saturday across Wisconsin, joining people taking to the streets nationwide to express outrage over the death of George Floyd, a black man killed in police custody in Minneapolis this week.

Starting around noon Saturday, about 2,000 people gathered near the state Capitol in Madison, with protesters holding signs and speakers denouncing police violence and racism. Traffic was blocked as the group moved along city streets. Likewise, hundreds gathered and marched through downtown Milwaukee for the second straight day.

By Saturday evening, what began as a day of peaceful protest turned into a chaotic scene in Madison. Police in riot gear fired tear gas and clashed with roughly 150 protesters who threw objects like rocks, chairs and water bottles, broke store windows, looted businesses and started fires along State Street.

After much of Saturday night's violence had abated, Madison Mayor Satya Rhodes-Conway declared a state of emergency through Wednesday and instituted a curfew overnight and for Sunday night.

"I want to be clear that this is in response to a number of people endangering themselves and others by shattering glass, destroying property, and engaging in widespread, systematic looting of local businesses," the mayor wrote in the announcement.

While the mayor said earlier Saturday evening she wouldn't be instituting a curfew in the city, Saturday's events prompted a change early Sunday morning. City officials announced a curfew on the city's isthmus from 12:01 a.m. to 5 a.m. Sunday and from 9:30 p.m. Sunday until 5 a.m. Monday.

Organizers of the earlier demonstration disavowed the violence. 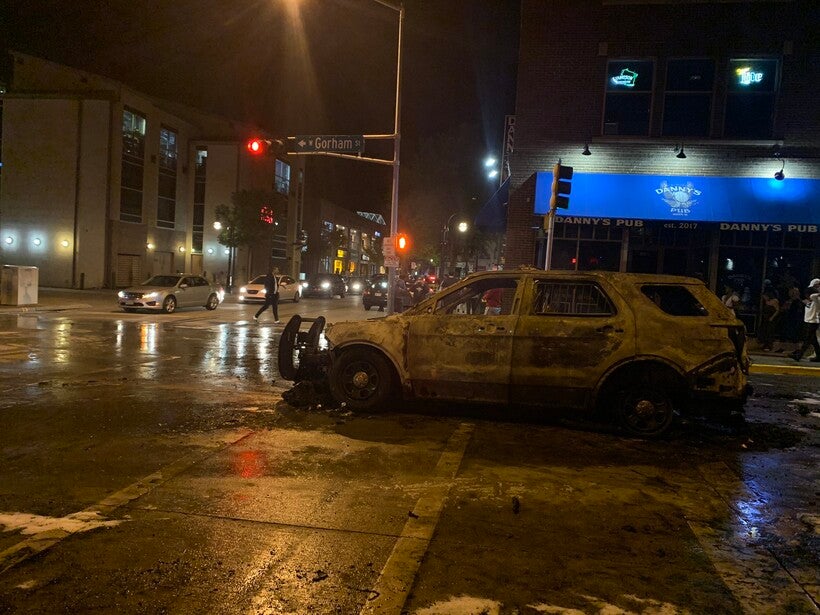 A Madison police squad car was burned near State Street in the city's downtown on Saturday night. Bridgit Bowden/WPR

Early in the evening in Madison, a crowd with their hands held aloft faced off against police near the state Capitol and chanted, "Hands up! Don't shoot." Elsewhere on State Street, nearby shops and businesses saw their windows smashed and looted. Eventually, police responded with tear gas and other crowd control measures.

A few minutes ago in Madison, WI. pic.twitter.com/A7SOCTrEZB

A nearby construction fence was used by some protesters gathered near the Capitol to create an improvised barrier from the police.

At a press conference Saturday night, Rhodes-Conway expressed solidarity with the protesters who gathered peacefully earlier in the day, calling Floyd's death an "American tragedy." But she denounced the violence and property damage that occurred later.

"This violence does nothing to support the interests of social justice, nor police and criminal justice reform," she said in front of the Madison City-County Building. "This conduct harms our community."

Madison Common Council President Sheri Carter said the violence in the city's downtown takes attention away from Floyd and his family. 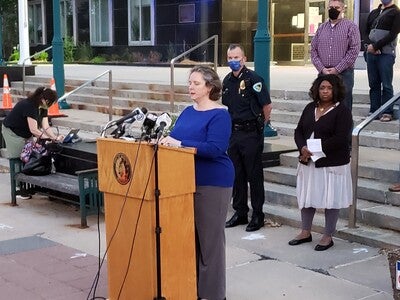 At a press conference Saturday night, Madison Mayor Satya Rhodes-Conway expressed solidarity with the protesters who gathered peacefully earlier in the day, calling Floyd's death an "American tragedy." But she denounced the violence and property damage that occurred later. Shawn Johnson/WPR

Madison Acting Police Chief Victor Wahl said he wasn't aware of any arrests being made as of 8:30 p.m. Saturday. Wahl said authorities hadn't made any arrests at that point because law enforcement is typically outnumbered in situations like this.

"We want to avoid escalating any further," he said.

As Saturday night continued, police in riot gear and protesters faced off along State Street and nearby cross streets as authorities sought to control and disperse the crowds using police lines, pepper spray and tear gas. Many downtown streets were closed.

A trash fire was apparently set on Johnson Street, but was extinguished by Madison firefighters. A police vehicle was burned on Gorham Street and another was vandalized near the Madison Public Library.

Shortly after midnight Sunday, most of the groups had seemingly broken up and left the area. As the crowds on State and Johnson streets dispersed, many chanted "George Floyd" as they walked away. The police line at that location ended and vehicle traffic near State Street resumed.

After 2 a.m. Sunday, University of Wisconsin-Madison police tweeted the situation on State Street had "stabilized," but said a significant law enforcement presence remained and encouraged people to avoid the area.

Earlier in the evening, community activists put out calls on social media for volunteers to assist with cleanup starting at 5 a.m. Sunday.

Meanwhile in Milwaukee, protesters continued to drive and march through the city more than an hour after the city's curfew went into effect at 9 p.m.. By 10:30 p.m., the heavy law enforcement presence seemed to have dispersed most of the remaining protesters.

"We cannot let the work of a few undermine the pain felt by our Black neighbors or distract from the source of this grief and anger — we must remember George Floyd, his life matters, he should still be alive today," Evers tweeted. "Right now, we must respond with our empathy and compassion. We must remember that anger and grief about injustice never need justification."

The violence Saturday night followed mostly peaceful demonstrations earlier in the afternoon, with hundreds gathering to demonstrate against Floyd's death in the Twin Cities.

The killing of Floyd, which was caught on video, has lead to days of violent demonstrations in Minneapolis and St. Paul, as well as protests in cities across the country.

Peaceful demonstrations Friday in Milwaukee escalated with looting and damage to businesses overnight. A 38-year-old Milwaukee police officer was shot early Saturday morning. The officer, who has been with the department for four years, was treated at a local hospital for minor injuries.

As demonstrations escalated in Milwaukee, law enforcement and city leaders requested assistance from the National Guard.

"It is critical that people are able to peacefully express their anger and frustration about systemic racism and injustice, in Milwaukee, the State of Wisconsin, and our Nation. This limited authorization of citizen soldiers from the Wisconsin National Guard will help protect people who are exercising their First Amendment rights and ensure the safety of the public," said Evers in a joint statement with Milwaukee Mayor Tom Barrett and Milwaukee County Executive David Crowley.

In a Saturday afternoon press conference, Barrett said the request was made because law enforcement were not able to respond adequately to the rapidly changing situation during the protests.

"We need the ones who know our city to be patrolling our city," said Barrett, adding that the National Guard would be assisting with protection of property.

"What we're trying to do is free them up to do that job. They were outmanned last night, and we can't allow that to happen," said Barrett.

"I'm asking all of us to show some restraints, show some cool heads," said Lucas. "Let us take our community back." 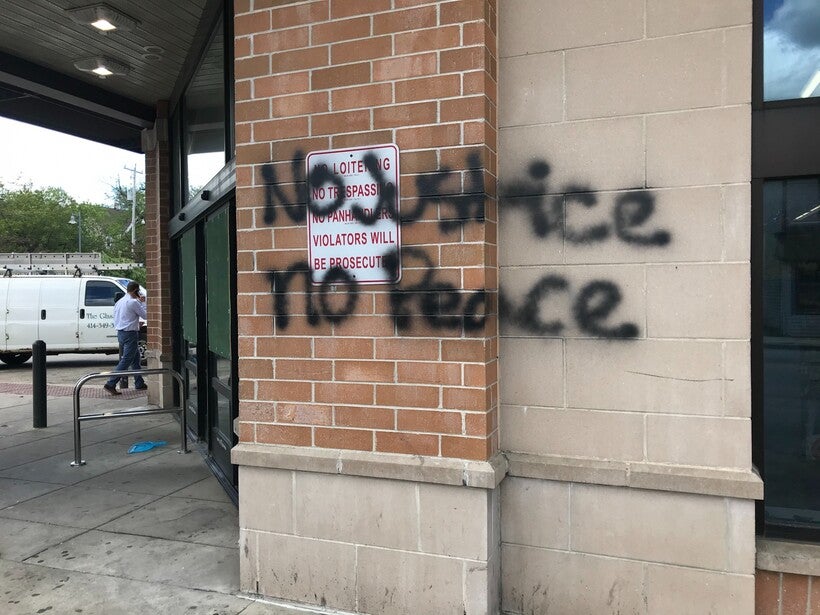 Several businesses, including this Walgreens in the 2800 block of North Martin Luther King Drive in Milwaukee were vandalized during protests Friday, May 29, 2020 into Saturday morning demanding justice for George Floyd in Minneapolis and Joel Acevedo in Milwaukee. Madeline Fox/WPR

A march was held Saturday in Milwaukee beginning at Veteran's Park on North Lincoln Memorial Drive to call for justice for Floyd. Hundreds of people took to the city's streets at 2 p.m. A speaker at the event called on people to take part in silent protests around government buildings "instead of tearing down businesses in our own communities."

Demonstrators marched along downtown streets before stopping outside the Milwaukee Police Administration Building to protest as officers in riot gear stood by. 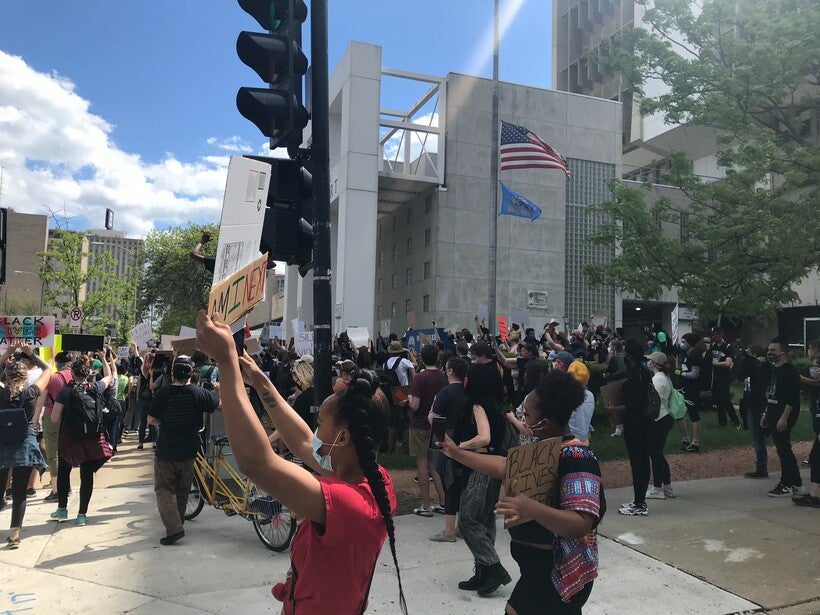 Demonstrators stopped outside the Milwaukee Police Administration building in the 700 block of W. State St. on Saturday, May 30, 2020, to protest as officers in riot gear stood by. Madeline Fox/WPR

In Madison, a gathering calling for justice in Floyd's death got underway Saturday afternoon at the state Capitol. According to the event's Facebook page Saturday morning, around 2,400 people said they planned to attend and demand justice for Floyd and others who have been killed by police officers, including Breonna Taylor, Tony McDade, Sean Reed, and Madison's Tony Robinson.

People were chanting obscenities about President Donald Trump and police, calling for a "police-free community," "community control," and "no more killer cops."

Speaker Brandi Grayson said protesters gathered Saturday as a result of "state violence," saying she was tired of waking up in tears and watching people dying. She called on people to get involved and demanded community control, such as a community review board, to weigh in on police actions.

Speaker Jordan King told the crowd that people have been hurt to the point where buildings are being destroyed. "Do I condone it? No. But, do I understand it? Yeah," said King.

The group has now gathered outside the house where Tony Robinson was killed by a Madison officer in 2015. pic.twitter.com/zmSbK3tEmj

Speaker M. Adams said to the crowd "If you're black, you're not safer at home."

Protesters marched through the streets from the Capitol Square and blocked traffic at East Washington Avenue for a while around 2:25 p.m. before moving onto Paterson Street.

People came to stop outside the house where Robinson was killed in 2015. The 19 year-old was shot and killed by a white police officer, Matt Kenny, on March 6, 2015. Police say Robinson hit Kenny on the head while high on hallucinogenic mushrooms. The Madison Police Department found Kenny did not violate the department's policies on deadly force. Kenny was cleared of any wrongdoing.

Protesters chanted "Who keeps us safe? We keep us safe," and "Hands up! Don't shoot!" 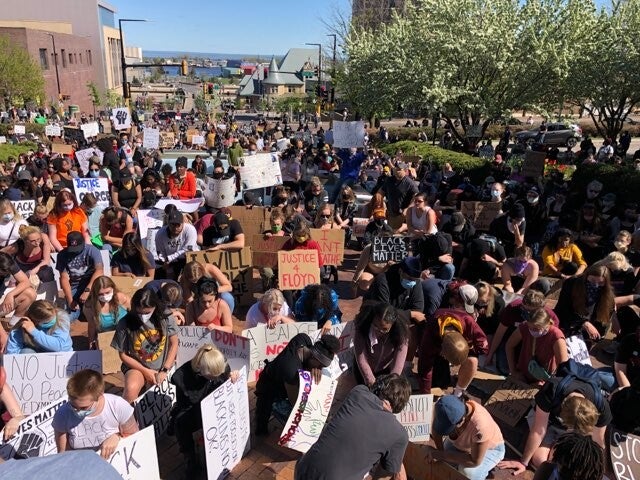 At least 1,000 people gathered in Duluth at a protest demanding justice for George Floyd on Saturday, May 30, 2020.
Robin Washington/WPR

Another demonstration for Floyd began at 3:30 p.m. Saturday at the Clayton Jackson McGhie Memorial in Duluth, Minnesota. At least 1,000 people gathered peacefully to demand justice for Floyd and other lives that have been lost, according to the Duluth News Tribune. People held signs that read "Black Lives Matter" and "No Justice. No Peace."

Those who spoke called for the prosecution of all four police officers involved in the death of Floyd. Demonstrators marched from the memorial along First Street to Duluth City Hall. The majority of protesters wore masks.

Eau Claire community organizers planned to host a virtual vigil on Zoom at 3 p.m. Sunday to honor the memory of Floyd. The event is organized by University of Wisconsin-Eau Claire Professor Selika Ducksworth-Lawton and two of Floyd's friends are expected to speak.

Editor's note: Danielle Kaeding, Madeline Fox, Bridgit Bowden, Shawn Johnson, John K. Wilson and David Hyland contributed reporting to this story. An earlier version of this story misspelled M. Adams' name. It also said the Milwaukee Chapter of Democratic Socialists of America had organized a Saturday afternoon march, but the group only encouraged members to attend. It has been corrected.