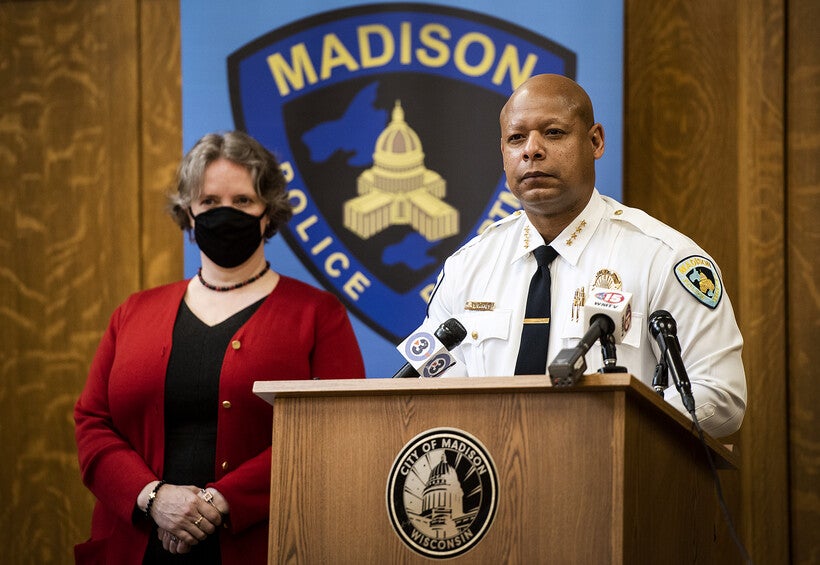 Attorneys made their closing arguments Monday in the trial of Derek Chauvin, the former Minneapolis police officer charged in the death of George Floyd last year.

At a press conference, Madison law enforcement, elected officials and other local leaders said they are preparing for potential protests in response to a verdict in the case. Floyd's death in May 2020 sparked massive protests in cities across the country, including in Madison, Milwaukee and other parts the state.

Madison Police Chief Shon Barnes said although he's not aware of any upcoming protest activity, the department is preparing.

"I would like to ensure our public that the Madison Police Department and our partners are prepared to protect the First Amendment demonstrators," he said.

During several days of unrest following Floyd's death, officers used pepper spray and tear gas in downtown Madison. Barnes said the department has made some changes to how they handle protests since that time. However, he said that the circumstances in which officers would use pepper spray or tear gas remain the same.

"We use them to protect people who are being hurt or being injured. It's not something that, quite frankly, I lose a lot of sleep over, because we don't plan on using that because we believe that our protesters will be peaceful," he said.

A number of downtown businesses were damaged during last summer's protests, including smashed windows and spray paint. Additionally, a police car was burned, and statues outside the state Capitol were torn down.

Madison Common Council president Sheri Carter urged potential protesters to refrain from damaging property. She said the purpose of protest is not to "destroy," but to "move a nation into action," and remember those who have died at the hands of police.

"Let us not forget the families at the epicenter of these horrific loss of life," she said. "The Floyd family, the Taylors, the Wrights and so many others that are experiencing the empty chair at the table."

"Because with each episode of excessive our deadly use of force, it reopens wounds, not just in Minnesota, but across the nation," he said.

"As a community, we have a long and complicated road ahead of us reimagining public safety and bringing internal reforms to our policing," she said at Monday's press conference. "I am hopeful that we can walk this road together, and that we can all work for justice, while keeping each other safe."