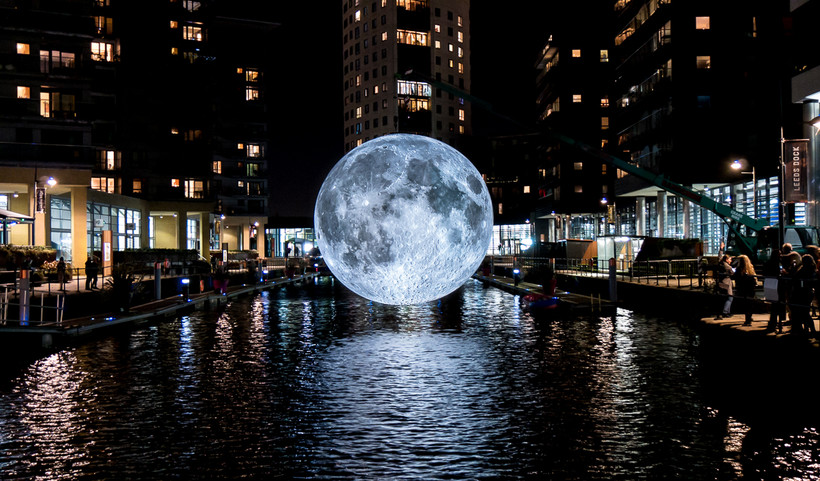 A 23-foot-wide replica of the moon — lit internally throughout the day and night — will take over Catalano Square in Milwaukee as part of the "Under One Moon" event. Photo courtesy of Leeds Living

Moon Installation Will Be Suspended Above Fountain At Catalano Square
By Elizabeth Dohms
Share:

Visitors to a lunar festival this weekend in Milwaukee will be dancing in the (artificial) moonlight during a pop-up art exhibit to celebrate the 50th anniversary of Apollo 11's moon landing.

From Friday through Sunday, art exhibits, kids' activities, music and a host of other events will take over Catalano Square in Milwaukee as part of the "Under One Moon" event hosted by Black Box Fund, an area organization that works to support public art, music and performance.

Of particular attraction will be a massive 23-foot-wide replica of the moon that will be lit internally throughout the day and night. This inflatable art installation, created with stitched-together lunar images from NASA and printed on material similar to a hot-air balloon, will be suspended by a crane about 13 feet above the park's fountain.

"During the day, you can see this gorgeous object, and then around dusk, it just is magic the way it begins to glow from inside because of our sun setting," said Kate Blomquist, producer of the pop-up festival, a term referring to it being a one-off event.

The centerpiece moon has been touring for several years under the title "Museum of the Moon" and was created by Luke Jerram, a United Kingdom-based artist. Securing that piece of art was the linchpin for the event, Blomquist said.

"It's a unique thing to have in Milwaukee," she said. 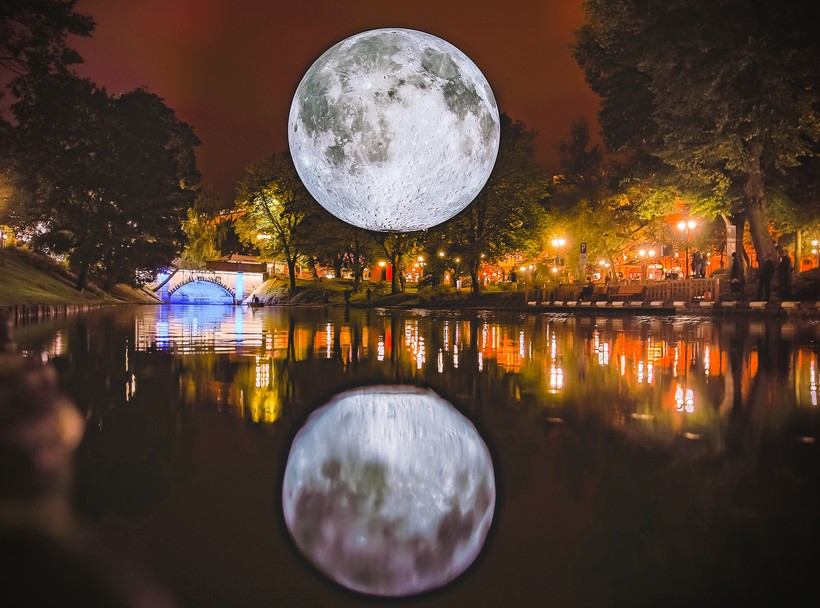 The "Museum of the Moon" by United Kingdom-based artist Luke Jerram. Photo courtesy of Robert Sils

The event opens Friday at 5 p.m. with a surround-sound composition by Dan Jones that combines music and spoken word from interviews and recording from the moon landing. That will lead into opening remarks by Bob Bonadurer, planetarium director at the Daniel M. Soref Planetarium in the Milwaukee Public Museum. The evening will progress with a presentation by Manfred Olson Planetarium director Jean Creighton, poetry readings and more music. The weekend will also include activities such as yoga, dance performances, storytelling, a hand drum performance and a presentation by NASA retired astronaut Wendy Lawrence.

Saturday's events will close with a performance by NINETEEN THIRTEEN, a cello and percussion performance by duo Janet Schiff and Victor DeLorenzo, founding drummer of the Violent Femmes.

"We were really drawn to them because we want the experience of the moon to be relaxed and a little atmospheric," Blomquist said. Additionally, there will be chalk artists and muralists live painting on Saturday and Sunday with lunar-based imagery.

Blomquist, a Milwaukee native who now lives in New York, has dabbled in her own lunar artwork. She created cyanotypes by exposing the print to the moonlight (the process typically calls for exposure to sunlight) and using tide water to rinse the print and expose the image.

"The moon has just been so fascinating for people," she said. "When you go out at night and see it rise ... and then it glowing above you, it's a mystery. It's magic. I think it's something that can really bring us together." 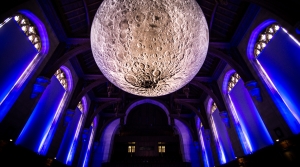 A pop-up lunar festival will emerge in Milwaukee this weekend to honor the 50th anniversary of the Apollo 11 moon landing. Our guest explains all things lunar, including how music, dance and art will take families out of this world.