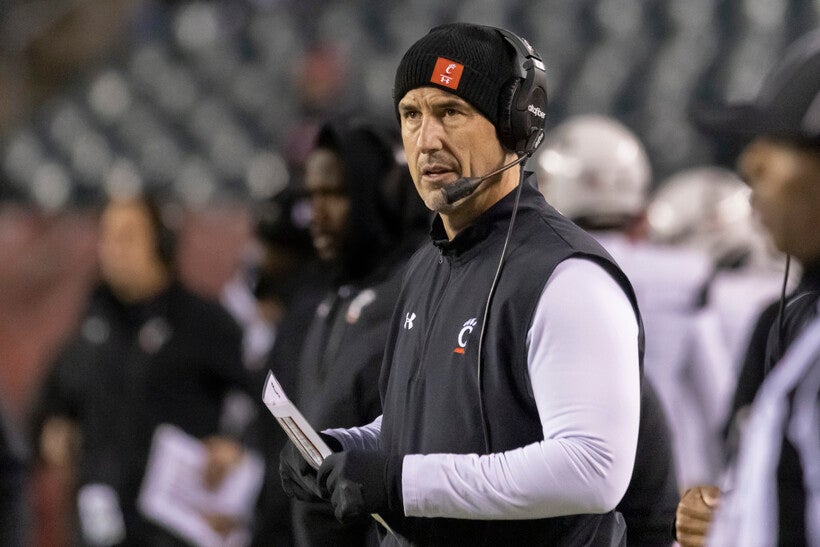 The University of Wisconsin-Madison has hired Luke Fickell as its new head football coach. Fickell comes to Wisconsin from the University of Cincinnati's football program and will replace interim Badgers coach Jim Leonhard.

Fickell became the Badgers' 31st head coach after the UW System Board of Regents approved a deal struck between the former Cincinnati coach and UW-Madison Director of Athletics Chris McIntosh on Sunday.

"I am incredibly excited to announce Luke Fickell as our new head football coach and to welcome his entire family to Madison," McIntosh said in a press release announcing the hire. "Luke is one of the top football coaches in the country."

Since becoming Cincinnati's head coach in 2017, Fickell racked up more wins than any of his predecessors with a 57-18 record over six seasons, according to UW-Madison's announcement. He also won eight national coaching honors in 2021 including The Home Depot National Coach of the Year and Paul "Bear" Bryant Coach of the year.

"My family and I are thrilled to join the Wisconsin family," Fickell said in the release. "This is a destination job at a program that I have admired from afar for years. I am in total alignment with Chris McIntosh's vision for this program. There is a tremendous foundation here that I can't wait to build upon. This world-class university, athletic department and passionately loyal fan base all have a strong commitment to success and I can't wait to be a part of it."

A Youtube video posted by the Badgers Sunday night showed Fickell and his family arriving in Madison via private jet and being greeted by campus leaders including UW-Madison Chancellor Jennifer Mnookin.

Fickell replaces interim coach Leonhard who took over the position in October after longtime head coach Paul Chryst was fired. At the time of the firing, UW-Madison owed Chryst more than $10 million in buyout money. Wisconsin Public Radio has submitted a records request with UW-Madison for Fickell's contract with the school.

During a Badgers press conference Monday afternoon, Fickell said he was humbled by the support of university and UW System officials exhibiting "a little bit of blind faith" during the hiring process. He said he's eager to get to work with the current team and build on decades of success in the Badgers football program.

"I'm not one to stand up here and make bold statements by any means. I'm not one to make outlandish goals and things that we're going to be able to do," Fickell said. "I can promise you this, that I'm going to get these guys to believe in what it is that we do, buy into the things that we do, the way that which we do them. And it's going to be because they see the trust, respect and love that I have for them every single day."

McIntosh said what set Fickell apart from a long list of other candidates for the flagship university's football team is his "proven process" that has "demonstrated results and success."

"But his process is not just limited to winning football games," McIntosh said. "His process teaches young men how to be successful in life off the field, on the field, in the classroom, now and beyond."

News of Fickell joining the Badgers program was greeted with shock and excitement by Badgers fans on social media and college football analysts. During an "emergency episode" of Badger Blitz TV Monday morning, editor Jon McNamara noted the Badgers football program is known for consistency, with many former players, like Leonhard, rising through the ranks.

McNamara said in recent weeks there was an expectation that McIntosh would stick with Leonhard.

"It's amazing," McNamara said. "I didn't see something like this happening, maybe, like a best case scenario for Wisconsin and something that you maybe didn't think was in play throughout this coaching search."

Fickell's arrival in Madison marks his return to the Big Ten conference after playing and coaching at Ohio State. He served there as co-defensive coordinator and linebackers coach from 2005-2016. Fickle graduated from Ohio State in 1997 with a degree in exercise science. He and his wife Amy have six children.