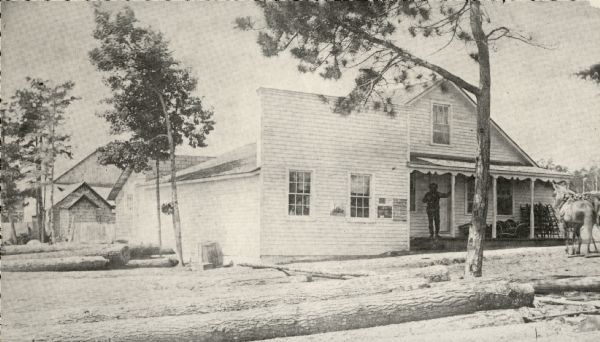 General store and post office. Hans Johnson, Newport's founder, is shown on the porch. The post office in the town of Newport was established on October 17, 1882, with Johnson as postmaster. It was discontinued on April 30, 1904. Photo courtesy of the Wisconsin Historical Society

Looking ahead as US Postal Service celebrates 200th anniversary in Wisconsin

This month marks the 200th anniversary of the first U.S. Post Office in Wisconsin.

Things were very different when the first post office opened near Green Bay in 1821. Back then mail would have traveled by horse and stagecoach, said Chris Shaw, author of "First Class: The U.S. Postal Service, Democracy and the Corporate Threat." Motor vehicles became the primary method for mail delivery more than a century later, according to Postal Service documents.

The post office also offers different services these days, Shaw said. Postal money orders and package delivery didn’t exist 200 years ago. And the Postal Service will continue to evolve, he said. Throughout the 1900s, there were savings banks located at many post offices.

"It was a way to make banking more accessible and available to Americans, and today there are millions of unbanked households, and there’s discussion about going back to basic banking functions again," he said.

The Postal Service recently started a pilot program where it’s cashing payroll and business checks at several locations in other states. The agency is also preparing to roll out its next generation of mail trucks, which are set to be designed and manufactured by Oshkosh Defense.

Right now the post office is working to hire hundreds of rural mail carriers in Wisconsin. The agency is one of the largest civilian employers in the country, Shaw said. It’s important for national commerce and elections, and it delivers prescription medications to millions of people, often in remote areas, he said.

It's the American people who’ve helped shape the Postal Service over the years, Shaw said. During its early days, Wisconsinites would have had to travel to the post office to pick up their mail, he said. But Americans lobbied Congress for home delivery and later package services.

"It’s always been a service that’s been responsive to what the citizens want it to do, and that’s really something to think about going forward: what do we want the Postal Service to be in the future?" he said. 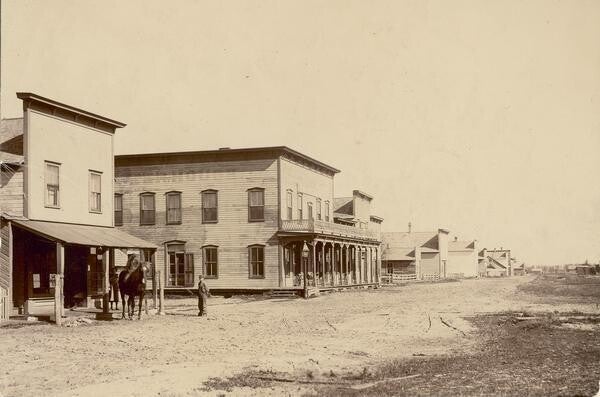 Exterior view of the post office in Boyceville, a village in Wisconsin, in 1897, with boy and horse in front. Photo courtesy of the Wisconsin Historical Society

But while some things have changed since the first post office in Wisconsin opened close to Green Bay, others have stayed the same, Shaw said.

"One tension that’s always been there — and this has been throughout the history dating back to when the first one opened in Wisconsin — has been the fact that it’s a public service, but it’s also a public service that brings in revenue through postage," he said.

Some people want to privatize the postal service, but others argue that areas with the greatest need — including rural regions — are also least profitable for mail delivery. The Postal Service also continues to maintain its mission of keeping citizens informed, Shaw said.

"This was something that George Washington really thought was key to the post office from the very start, so it’s always delivered magazines, newspapers, periodicals, these sources of information, at a very low postage rate," he said.

The Postal Service still offers a lower postage rate for sources of news and information.