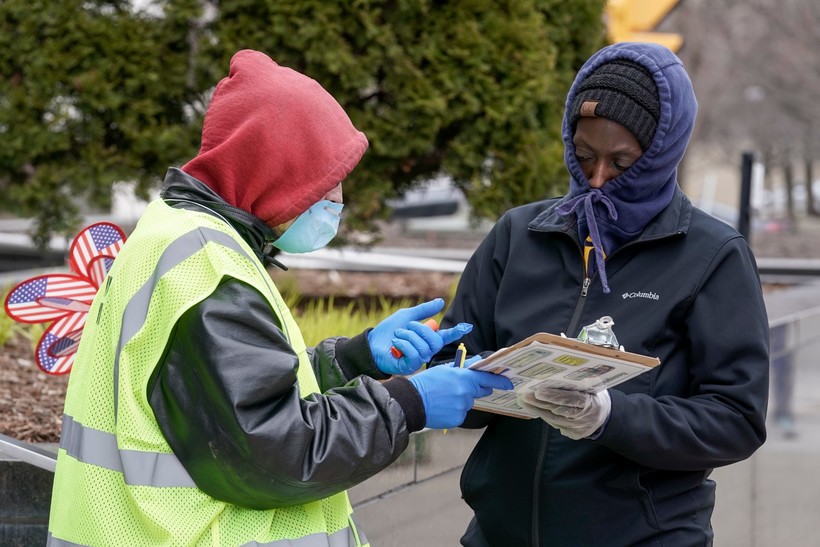 Live: What To Know April 7 About COVID-19 In Wisconsin

The number of positive cases of COVID-19 in Wisconsin continues to grow.

The state Department of Health Services announced Tuesday there are 2,578 positive cases of COVID-19 statewide and 92 deaths.

Starting Wednesday, April 8, all Wisconsin DMV service centers will be closed, except for appointments with drivers who have essential business.

According to a release from the department, these are the only essential in-person services:

Other services, including as address changes and vehicle registrations, can be completed online.

3:27 PM: Drive-In Churches An Option For Faithful Who Want Closeness

With coronavirus prevention measures shuttering houses of worship, pastors across the country are using that ultimate tool of social distancing — cars — to safely bring their communities closer together, the Associated Press reports.

It is a closeness congregations desire like never before. Drive-in churches are popping up so worshipers can assemble.

Physical presence is no gimmick, but rather embodies the communion central to many faiths. That’s why religious leaders are devising creative (and law-abiding) ways to make socially distanced worship possible. Said one pastor: "We need them to say, 'Oh, I see you there and you’re still OK and we care about you.'"

The Fond du Lac County Health Department has ordered a shutdown of county campsites, as many Wisconsin tourist destinations try to stem the spread of COVID-19 by discouraging outsiders from traveling there.

Keeping campgrounds open would encourage nonessential travel and visits to local stores, and social distancing in communal bathrooms and other facilities would be difficult, the announcement states.

The Wisconsin Department of Health Services is reporting 2,578 people have tested positive for COVID-19, an increase of 138 cases since Monday afternoon.

Statewide, 92 people have died from COVID-19, according to DHS.

DHS reported that 745 people have been hospitalized for COVID-19, which represents 29 percent of those testing positive.

As of Tuesday afternoon, 28,512 people had tested negative.

11:42 AM: City Of Superior Limits Beach Access To County Residents Only

Only Douglas County residents will be able to enjoy Superior's beaches as the city works to make people comply with Gov. Tony Evers' stay-at-home order, the city announced on Tuesday.

Milwaukee County has closed its beaches.

Last week, in response to the continuing COVID-19 pandemic, UW-Madison made all of its summer courses online-only. On Tuesday, UW-Madison Provost Karl Scholz announced all face-to-face summer programs and activities that do not carry class credit are canceled.

Scholz wrote in an email announcing the cancellations there are some exceptions for programs approved for distance learning.

10:04 AM: Viterbo University Opens Up Dorm To Healthcare Workers

Local health care and emergency workers who have not been diagnosed with COVID-19 can stay in a dorm at Viterbo University in La Crosse starting on Tuesday, April 14, according to an announcement from the school.

No students will be living in the building, the announcement states.

It's the latest in a series of efforts to isolate people who may have come into contact with the new coronavirus. Last week, the University of Wisconsin-Madison opened up the Lowell Center, an on-campus hotel, to people who have suspected or confirmed cases of COVID-19.

7 AM: Polls Open Across Wisconsin Amid Coronavirus Pandemic

Hundreds of thousands of Wisconsin voters could head to the polls in an election unlike any ever seen before in the state as officials and voters alike contend with new rules and procedures spurred by the COVID-19 pandemic.

Polls were set to open at 7 a.m. statewide.

Voters will weigh in on the Democratic presidential primary, a state Supreme Court race and a proposed amendment to the state constitution. There are also thousands of local offices on ballots across Wisconsin.

In-person turnout at the polls is expected to be lower than usual. Many voters have opted to vote by mail and others have expressed concerns about the risk of exposing themselves to the coronavirus at crowded polling places.

Tuesday’s vote comes after weeks of legal tumult and partisan fighting over whether the election should proceed as the new coronavirus spreads in Wisconsin.

On Monday, Gov. Tony Evers attempted to push back the election to June with an emergency order, but the Republican-controlled state Legislature immediately made an appeal to the state Supreme Court, which ruled 4-2 to strike the order down in just a matter of hours. 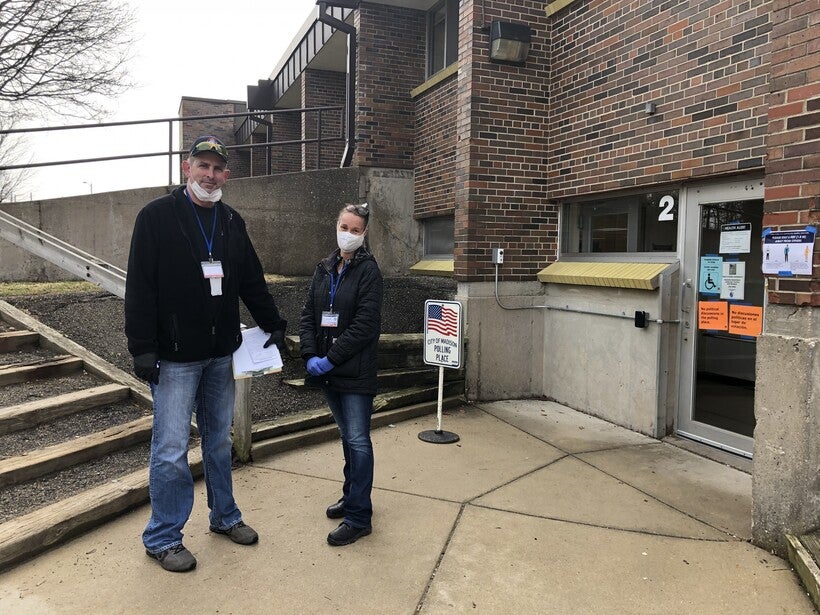 Jerry McMullen and Jen Blair with the Madison Fire Department let voters in and out of the polling station at Kennedy Elementary School in Madison on April 7, 2020. They say there has been a steady stream of people all day, including people using drive-thru voting. Maureen McCollum/WPR

Wisconsin poll workers are arriving at primary voting locations around the state and some are fearful about catching and spreading the coronavirus as thousands turn out to vote despite a stay-at-home order.

A small number of voters, some wearing masks, lined up at one Milwaukee polling place before it opened Tuesday, according to the Associated Press. They stood apart from one another as safety guidelines have recommended.

Rob Cronwell, 49, of Glendale, has worked the polls in the past and decided to sign up again this year knowing there would be a shortage.

Cronwell told the Journal Sentinel he has concerns about his well-being, but considers it critical to have open, free and fair elections.

The city of Madison has made its poll workers aware of extra precautions that are being taken, including hand sanitizer, Plexiglas separations and floor marks for safe distancing.

More than 2,400 cases of coronavirus have been reported across the state as of Monday.

MONDAY: US Supreme Court Weighs In

The U.S. Supreme Court issued a decision Monday requiring absentee ballots in Wisconsin's election to be postmarked or delivered by  8 p.m. Tuesday, April 7.

Under a previous court order by U.S. District Judge William Conley, voters would have had the chance to cast absentee ballots after polls closed as long as they were received by 4 p.m. Monday, April 13.

Conservatives on the Wisconsin Supreme Court have blocked an attempt by Democratic Gov. Tony Evers to postpone Tuesday's election, a ruling the court made just four hours after Evers acted.

The court's decision — coupled with a later U.S. Supreme Court order — means that despite daily public health warnings to avoid large crowds because of the COVID-19 pandemic, Wisconsin's April 7 election is happening.

Evers said his executive order was necessary to ensure health and safety as the number of cases of COVID-19 grow in Wisconsin. Republican legislative leaders called his order illegal and vowed a swift appeal to the state's highest court.

"As we continue to fight this pandemic, it angers me that some individuals are not taking it as seriously as they should," Morales said.

Morales said if people commit a crime, they will be charged with violating the stay-at-home order in addition to any other charges they rack up. People who go out for a non-essential reason and participate in an activity "that leads to (their) victimization" will also be arrested.

The Wisconsin Department of Health Services is reporting 2,440 people have tested positive for COVID-19, an increase of 173 since Sunday afternoon. Waushara and Kewaunee Counties both reported their first positive cases Monday, according to DHS.

According to DHS, 668 people have been hospitalized for COVID-19, which represents 27 percent of those testing positive.

The Wisconsin Elections Commission has released a list of the top 10 tips for voters who may be confused about ongoing changes to the April 7 election as a result of the spread of COVID-19 cases in the state.

The Wisconsin State Journal reports the University of Wisconsin System has asked state lawmakers for $59 million in emergency relief to address fiscal challenges caused by the new coronavirus.

The request includes $25 million to help offset an estimated $78 million in housing and dining hall refunds to students who have left campus and are taking classes online. It also includes $16 million in information technology support, which includes the purchase of e-textbooks and software for virtual testing.

The state funding request is in addition to an estimated $94 million in federal aid passed as part of the federal CARES stimulus.