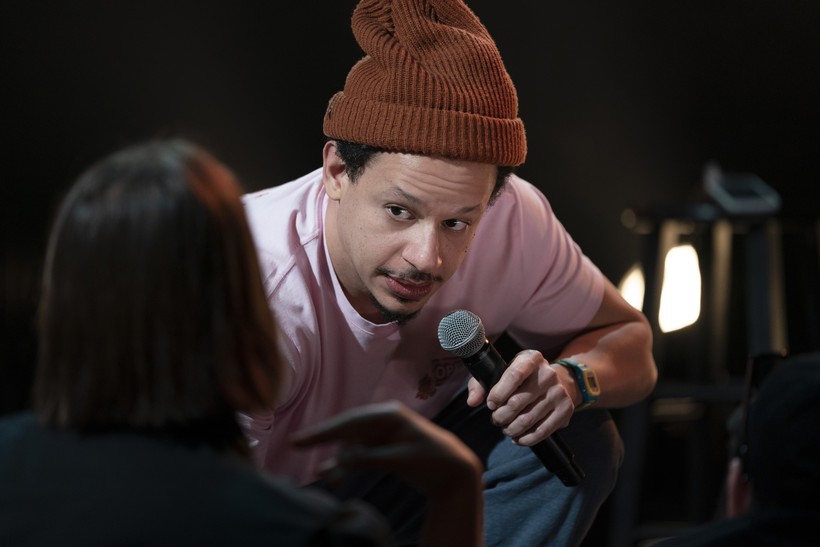 Eric Andre wants to push your buttons with his comedy.

"I feel like the majority of my jokes are about race, race politics, life, death, poverty, racism, existentialism and the problems with organized religion and Calvinism," he said.

When he recently spoke with Doug Gordon of WPR's "BETA", the conversation ricocheted from one thing to the next with the same frenetic energy as in his new Netflix comedy special, "Legalize Everything."

In the special, he talks about smoking marijuana with his mom for the first time. He thought it went OK.

"She couldn't really inhale it. She kept, like, choking," he said. "So I gave her a little weed fortune cookie that I got from the farmer's market."

They sat down to play Scrabble, and she complained of a dry mouth; asking if that was part of the appeal.

In his special, Andre says all drugs and sex work should be decriminalized, but he also admits some things need to stay illegal.

"I don't think we should legalize murder. I mean, murder, rape, burglary. Those things can remain illegal," he said.

"I think we shouldn't have guns with, like, double banana clips that you can just press the trigger once and one hundred bullets can spray out because you don't need that for hunting," he continued.

He said he's even willing to run for president to make it happen.

"I mean, I could put a GoFundMe together, buy my own island and then start a country on my own island. But I wouldn't have any constituents," he conceded.

Andre also tears down the recently canceled television show "COPS" in his special. First, for glorifying police brutality, systemic racism and bigotry, and then for choosing reggae as its soundtrack.

"It's just a montage of police brutality footage and state power and you're playing the most relaxing, vacation-inducing music," he said with a laugh.

Pranks are also a big part of Andre's humor, and in his special, he collects an audience member's phone and texts their mother using the device's predictive typing feature.

"It's like the auto-fill function ... when it tries to guess your next word in the sentence," he explained. "It's like the game Mad Libs that you played as a kid. The phone is a random word generator."

He started by pranking his own mom on stage, but she caught on after experiencing a couple nonsensical exchanges with her son. So, Andre moved on to the audience for fresh material.

"It creates the perfect mom confusion," he said. "It's also very relatable and it's G-rated. It's not harsh. You can't go too harsh with the moms or the audience kind of turns on you. You don't want to be mean to the moms."

Pranks are also center stage on "The Eric Andre Show," the comedian's series on Adult Swim, which Andre describes as a mix of all his influences.

Andre puts his celebrity guests in very uncomfortable situations on the show, and he said they're never in on the joke.

"It's a hundred percent ambush. I can't help what they watch before they come in, but we tell their publicist next to nothing. We just get them a date and a time to show up," he explained.

"And they're just blindsided by everything," he continued. "And we purposely try not to book guests that would watch Adult Swim or watch the show."

The chill Ed McMahon to Andre's unhinged Johnny Carson is comedian Hannibal Buress. They met around 2006 while performing at open mics in New York City.

"It was just love at first sight. I think he's just so funny, and he's like completely opposite in energy," he said. "And we just have a great odd couple dynamic."

Andre recently had a movie release delayed by the coronavirus pandemic. "Bad Trip" is a hidden-camera prank comedy that follows two best friends; played by Andre and Lil Rel Howery, on a cross-country road trip.

Netflix has purchased the rights to the film and plans to release it digitally later this year.

As for Andre's other career goals, they're ambitious.

"I want to do more hidden camera stuff, tour 'The Eric Andre Show' live," he said. "I want to help some comedian friends produce their own shows. And I want to escape my country because it is completely disintegrating."

So does that mean he's not going to run for president after all?

"I think my first day in office, I would abandon the country, probably just leave," he admitted. "I'd move to Tahiti."