More than a century ago, Wisconsin was a hotbed of progressive politics, where people like "Fighting" Bob La Follette led a "political revolution" and drew up the blueprint for the American left.

Today, it's national Democrats, especially those running for president, who've led the party's charge for a progressive agenda.

Nearly all the major Democratic candidates for president this cycle have run to the left of Wisconsin Gov. Tony Evers, the standard-bearer for Democratic state politics who helped the party sweep statewide elections in 2018.

It has some in the party questioning whether the progressive message is still a winning one in Wisconsin, despite its history.

For grassroots Democratic Party volunteers like Bob Andruskiewicz in Eau Claire, the answer is a resounding "yes."

Others, like Democrat Peder Hamm of Menomonie, think a winning political message must include some moderation. He thinks promises by Democratic presidential candidates to offer everything from free education to student loan forgiveness won't win in Wisconsin.

"This is not going to happen!" Hamm said after a presentation at a recent meeting of the Dunn County Democratic Party. "We’ve got a (U.S.) Senate that is so retrograde now and so Republican that they’ll shoot anything down even if you could get it through the House."

After a series of primary elections on March 3, known as Super Tuesday, the field of Democrats vying for the presidential nomination was narrowed to two major contenders, with each representing one so-called "lane" of the party: Vermont U.S. Sen. Bernie Sanders, the self-described democratic socialist and clear progressive in the race, who won Wisconsin's presidential primary in 2016 and whose own political revolution came up short in 2016; and former Vice President Joe Biden, who is running as the more moderate candidate, and has suggested that Sanders' positions are too controversial to win in the general election.

A week after Super Tuesday, Biden outpaced Sanders again in another series of primary wins that included a 16-point win in Michigan. 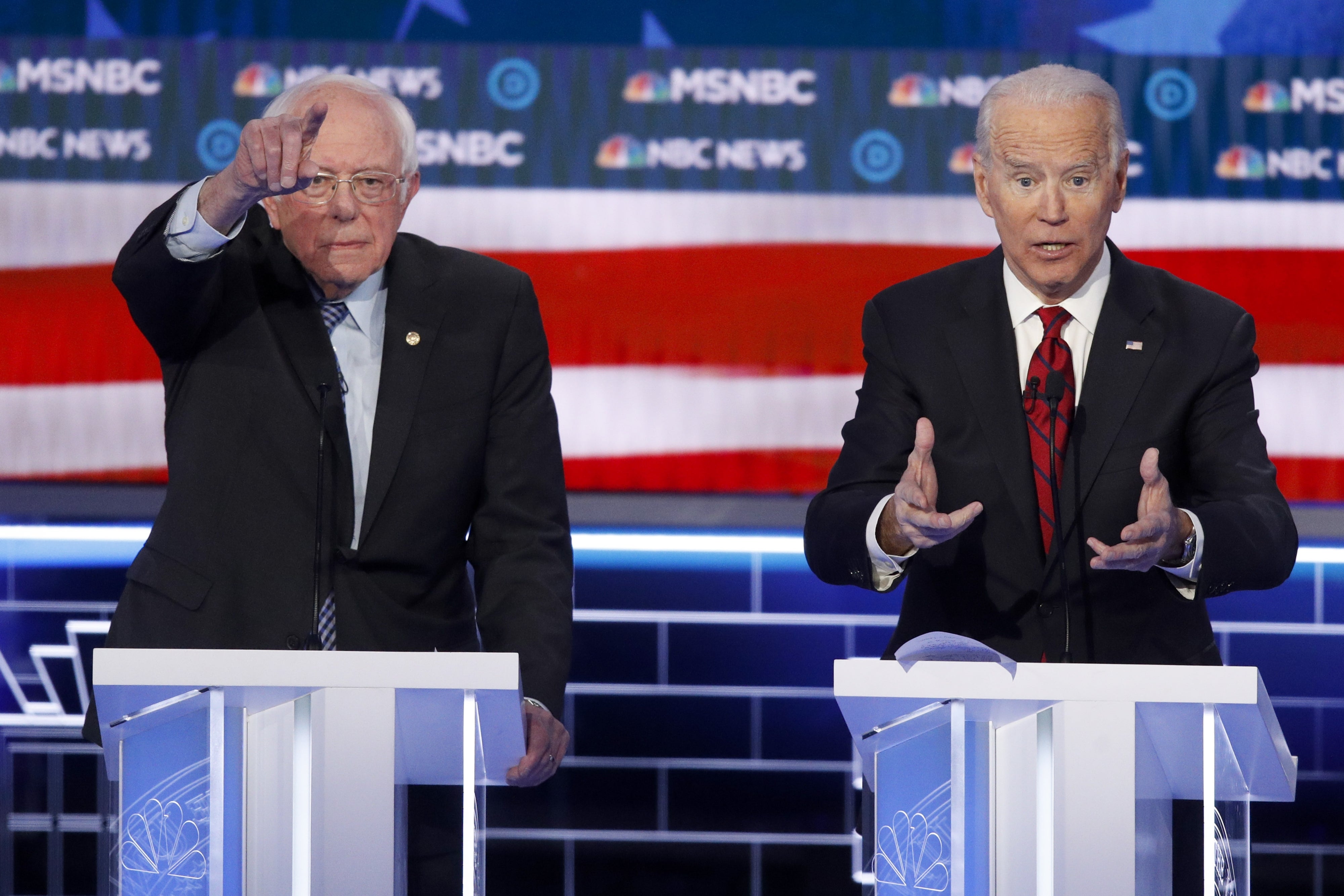 Without a doubt, there are dramatic differences in their policies, but both Sanders and Biden have a few ideas in common.

Both want to expand government's role in the health care system to make it more similar to Medicare; both want to make at least two years of college free for all students; and both want to spend trillions of dollars moving the nation away from fossil fuels.

"You have a pretty strong and organized progressive wing of the national Democratic Party," said Azari. "So, even if there’s a more centrist wing, the national party is still trending left."

A Contrast To Evers

By comparison, policy proposals on health care and higher education pitched in Wisconsin by Evers during his own crowded primary two years ago seem measured and more moderate.

At a July 2018 debate sponsored by Milwaukee's WTMJ-TV, a moderator asked candidates to raise their hand if they supported two free years of community college for all residents in Wisconsin.

On a stage with seven other candidates, Evers was the only one not holding his hand up.

Later in his campaign, Evers vowed to support moving toward the creation of a state-run public health insurance option called "BadgerCare For All" by the end of his first term. BadgerCare is the state’s Medicaid insurance program.

Robert Kraig, the executive director of the liberal advocacy group Citizen Action of Wisconsin, told WPR it was pressure from activists that pushed Evers in that direction.

"And Gov. Evers supported it and committed to do it in his first term but said it would be complicated and has not done anything, let alone introduced a bill," Kraig said.

But there are practical hurdles to consider when it comes to Evers' agenda, namely the state Legislature, which is run by big Republican majorities.

In his first state budget, Evers included $50,000 to create a task force aimed at studying the possibility of the state refinancing student loan debt. He also called for accepting federal money to expand BadgerCare to include people just above the federal poverty line.

Republicans rejected those and many other Evers policies, leaving the governor to sign executive orders creating task forces to study the issues, or pledging support for causes like the U.S. Climate Alliance. 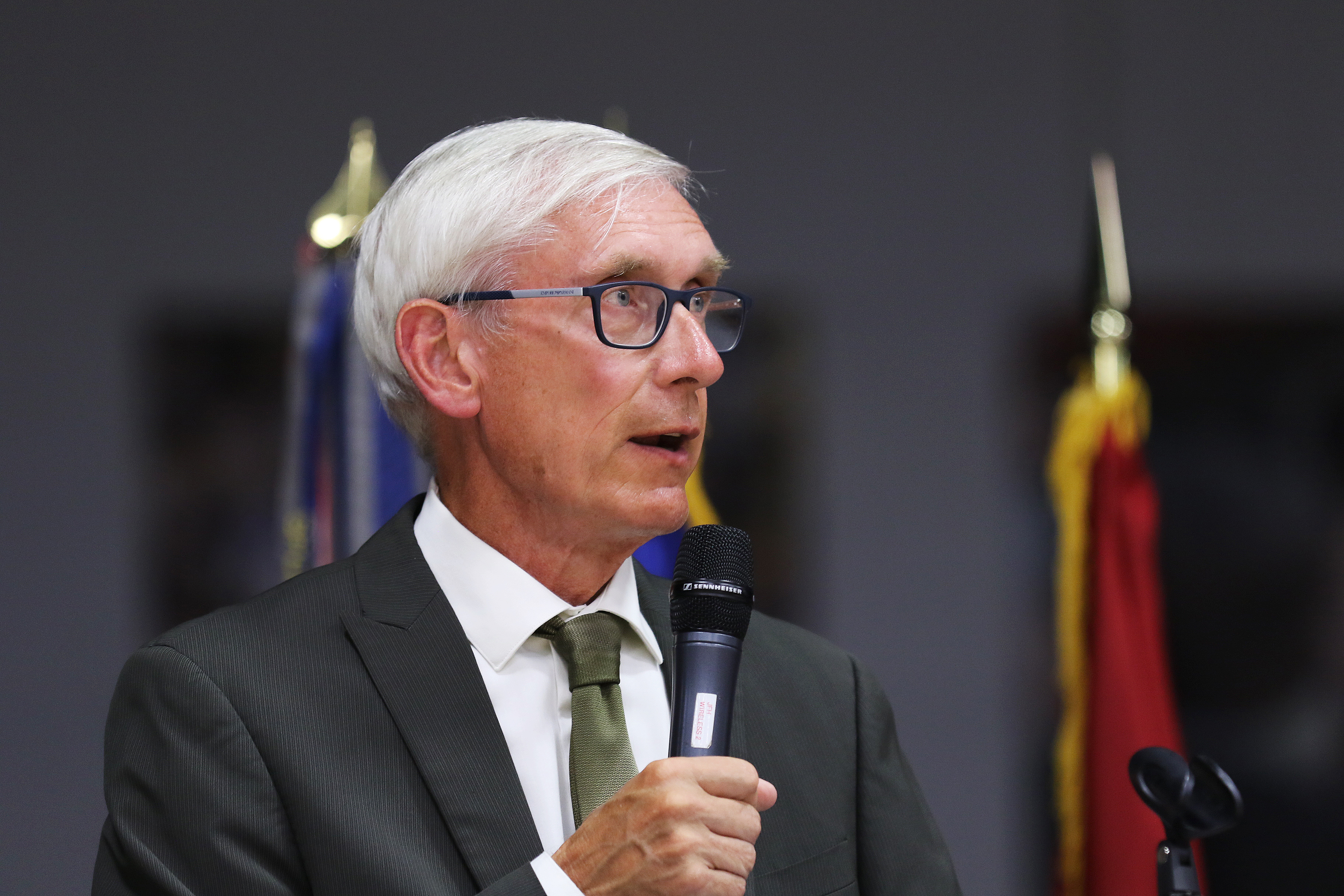 In an interview with WPR, Evers acknowledged that his push to expand Medicaid in Wisconsin is not the same as "Medicare for All," which many on the progressive end of the Democratic Party support, or even his campaign support of BadgerCare for All. But he said the goals are the same.

"I’d say we’re real close," said Evers. "Do I think we have to have a better health care system? Absolutely. But in Wisconsin the door will be opened when we get Medicaid expansion."

Kraig called it striking that, in the current election cycle, Wisconsin Democrats like Evers and those in the Legislature look "substantially less bold than even the most moderate national presidential candidates."

"It’s hard to tell what affects elections, what the variables are," said Kraig. "But we think that Gov. Evers, by not setting out a bolder agenda, is making it harder to pick up seats in the Legislature."

Evers won't face his own reelection bid for another two years, although the most recent poll by Marquette University showed his job approval at 51 percent, 3 points higher than Trump's and 5 points higher than the state Legislature's.

The Draw Of 'Electability'

If Evers was able to win his Democratic primary by being more centrist two years ago, does that mean Wisconsin Democrats are trending more moderate? According to Marquette’s Azari, the answer is not necessarily.

"The simplest explanation is he’d been on the ballot," Azari said, referring to Evers' three victories in officially nonpartisan races for state superintendent of public instruction. "He'd won statewide office."

"He kind of could make that electability case that we’re now seeing being debated so much in the Democratic Party," Azari said.

Azari said Wisconsin's headline-grabbing swing from voting for Barack Obama in 2012 to Donald Trump in 2016 could be explained by traces of the state’s progressive movement history.

"Trump won Wisconsin very narrowly," said Azari. "Bernie Sanders won the Wisconsin primary in 2016 on the Democratic side. And I think in those cases you kind of do see that progressive, anti-establishment ethos peeking out."