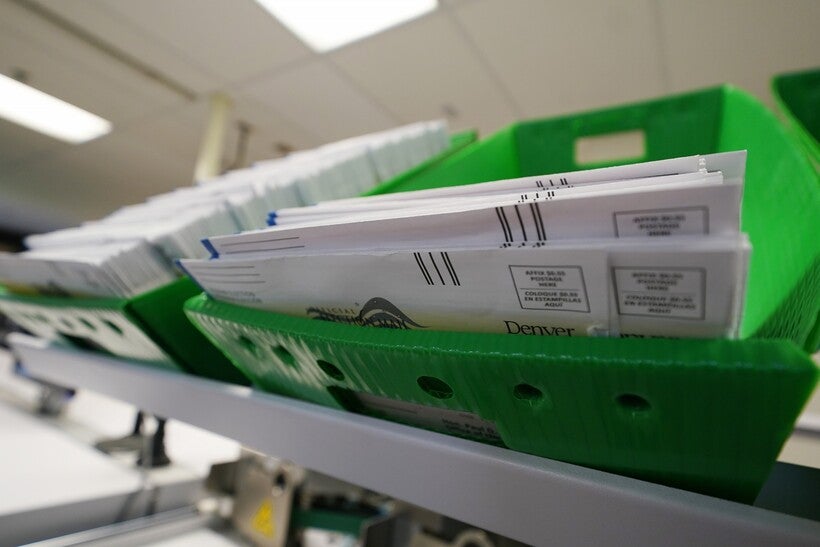 Test ballots left over from the primary election sit in counting machines as they are prepared for the 2020 general election in the city of Denver at the Denver Election Commission headquarters Tuesday, Sept. 29, 2020, in Denver. David Zalubowski/AP Photo

Lawsuit seeks clarification of "missing" address information in state law and requirement for clerks to contact voters about corrections
By Rich Kremer
Share:

The League is suing the Wisconsin Elections Commission in Dane County Circuit Court. The group is asking Judge Nia Trammell for a declaratory judgment aimed at clarifying state statute barring clerks from counting a ballot if the envelope, also referred to as a witness certificate, "is missing the address" of that individual.

A brief filed by LWM on Thursday, argues "the common-sense, plain-language definition" of the word "missing" only applies to "circumstances in which the address field is left completely blank" on absentee ballot envelopes.

The suit is just one of several legal battles related to voting in the state. Multiple lawsuits have been filed over absentee ballot witness certificates and 2016 guidance from the WEC stating clerks may correct missing address information based on other information on the envelope "or other reliable extrinsic sources." The idea behind the policy was to prevent voters from being disenfranchised.

In early September, a Waukesha County Judge ruled clerks are not allowed to correct the certificates.

Because of that ruling, and the undefined definition of the word "missing," the League is also seeking a temporary injunction "that requires notice be provided to any and all voters" with a problem on their witness certificate envelopes.

During a Friday hearing, Attorney Dan Lenz, who is representing LWM, said ballots with witness certificates that include a partial address or even just the name of a municipality should not be rejected. He said current law creates confusion among clerks that could cause votes not to be counted.

"So, our relief is really narrowly tailored to avoid disenfranchisement and confusion," said Lenz. "This is information that will go to the clerks about how they're supposed to handle these ballots."

"I struggle with understanding how just simply listing a municipality can be equated with an address," said Judge Trammell. "And so when I look at the purpose and what the legislature was trying to accomplish in enacting that particular statute, it would seem that you'd reach absurd results if just looking at a municipality on a ballot would constitute an address."

Kilpatrick also questioned the injunction ordering WEC to require clerks to contact voters with ballot issues because the commission's prior guidance on absentee ballot corrections was only advisory.

"It's guidance," said Kilpatrick. "It's not the law. It's advice to clerks."

Judge Trammell said she would issue a ruling on the League of Women Voters' motions within the coming weeks. But she said she has some concerns regarding whether changing rules surrounding absentee ballots again, within a month of the November election, would cause more confusion.