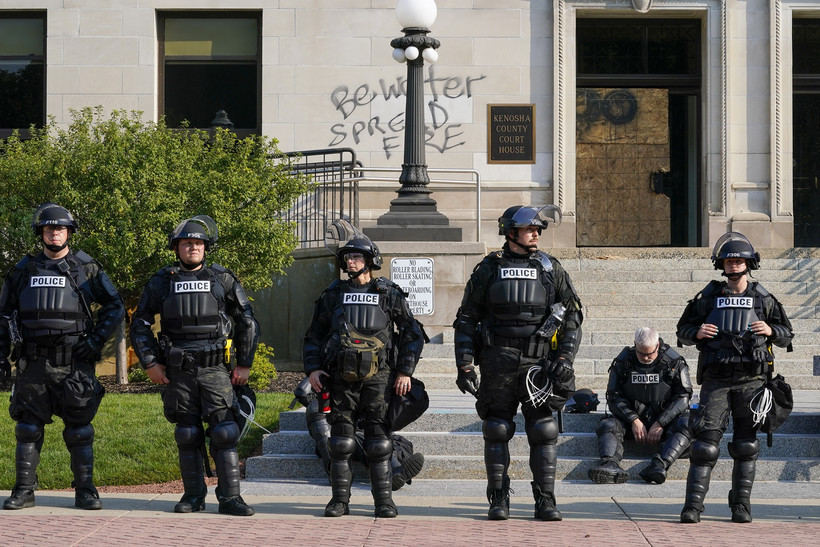 Political and community leaders are calling for an investigation into the shooting of a Kenosha man by police on Sunday afternoon.

Jacob Blake, a 29-year-old Black man, was shot multiple times by police who were responding to a domestic violence call on the city's north side. A video of the shooting taken by a witness shows police grabbing Blake's shirt as he tries to open a vehicle, before at least one officer shoots Blake multiple times in the back.

"These shots pierce the soul of our nation," former Vice President Joe Biden, Democratic candidate for president, said in a statement. "Jill and I pray for Jacob’s recovery and for his children."

Biden called for "an immediate, full and transparent investigation" into the shooting, a sentiment echoed by other political leaders.

During an interview with WPR’s "The Morning Show", Democratic state Sen. Bob Wirch, who represents Kenosha, called the shooting "horrible."

"It seems to me that (police) could have used a taser. But let's wait for all of the facts to come in," Wirch said. "I believe in the rule of law, and we need a thorough investigation of what happened, the events leading up to this shooting and whatever. But it's just terrible and I think we have to rededicate ourselves to peace and justice in our community."

He pointed to the leadership of former Georgia Congressman John Lewis and the Civil Rights movement as examples of what peaceful protest can accomplish.

"I understand that you want things changed right away, but they made tremendous change through nonviolent protest," Wirch said. "I’ve seen what happens when you don't have nonviolent protest. Then you get the strong 'law and order' people in there and you take two or three backwards steps."

Wirch said the shooting also highlighted the need for all police departments in the state to use body cameras. He said the state should provide the equipment by reallocating money from the state’s manufacturing and agriculture income tax credit.

In a statement, Republican state Sen. Van Wanggaard, a former police officer who now represents rural and suburban areas of Kenosha County, said Wisconsinites should wait for more information before drawing conclusions about the incident. Though the video of the shooting has been widely viewed, it's important to remember that not every aspect was captured on camera, Wangaard said.

"We must let law and reason, not emotion, guide the next steps," he said. "I know passions and tensions are high right now between certain communities and law enforcement. It’s important to realize that tension goes both ways."

If an investigation shows the shooting was not justified, "people will be held accountable," Wanggaard said, before condemning protesters who caused damage Sunday night and calling out Gov. Tony Evers for "escalating" tensions.

"While we do not have all of the details yet, what we know for certain is that he is not the first Black man or person to have been shot or injured or mercilessly killed at the hands of individuals in law enforcement in our state or our country," Evers said in a statement.

In addition to expressing empathy, Evers said he also plans to demand action in the coming days. On Monday, Evers signed an executive order calling for a special legislative session to address policing to begin Aug. 31. He asked the Legislature to take action on a package of bills, originally proposed in June, that would prohibit no-knock search warrants, establish statewide use-of-force protocols and require deescalation training.

"This is not a time for political posturing or to suggest defunding law enforcement," he said in a statement. "When a community is hurting, the most important thing that we can do is to listen."

"Black lives matter. We cannot stop repeating this until we understand its meaning and put that meaning into action," he said.

"These are streets where bicycles should be flying by, rather than bullets," he said in a statement.

According to the Kenosha News, witnesses said Blake was unarmed, and that he had been trying to break up a dispute between two women when the police arrived.

According to other media reports, Blake remains hospitalized and in serious condition as of Monday morning.

The shooting spurred a night of heated protest. In Kenosha, protesters marched into the city's downtown, where they squared off against riot police. At least three garbage trucks were burned out and storefronts were damaged. According to the ACLU of Wisconsin, police were armed with rubber bullets and used tear gas to disperse crowds.

America is already in the midst national reckoning on police brutality, spurred by the killings of George Floyd and Breonna Taylor. Chris Ott, executive director of the ACLU of Wisconsin, said police reform is no longer sufficient — policing in America must be transformed.

"These repeated acts of violence against Black people by police have created a clear message: the police do not value the lives of the people in the Black and brown communities they serve in the same way that they do their own," he said.

On Monday, protests are expected to take place in Kenosha and around the state, including in Madison, Milwaukee and Appleton. A news conference featuring civil rights organizations is planned for 2 p.m. outside the Kenosha Municipal Building.

A statement from the Wisconsin Department of Justice said that it would investigate the shooting, with help from the Wisconsin State Patrol and Kenosha County Sheriff’s Office. The involved officers have been placed on administrative leave, according to the statement.

"The Wisconsin Department of Justice is vigorously and thoroughly investigating yesterday’s officer-involved shooting in Kenosha. As with all investigations we conduct, we will unwaveringly pursue justice in this case," Wisconsin Attorney General Josh Kaul said in a statement.

The incident has made national headlines, with members of Wisconsin's Washington delegation, including Republic U.S. Sen. Ron Johnson and Democratic U.S. Sen. Tammy Baldwin, voicing their support for a thorough investigation and calling on protestors to remain peaceful.

"We need the Wisconsin Department of Justice to conduct a thorough, independent, exhaustive investigation into the officer-involved shooting in Kenosha. We must support each other and our Kenosha community, and we cannot allow violence and destruction," Republican U.S. Rep. Bryan Steil, who represents Kenosha, said in a statement.