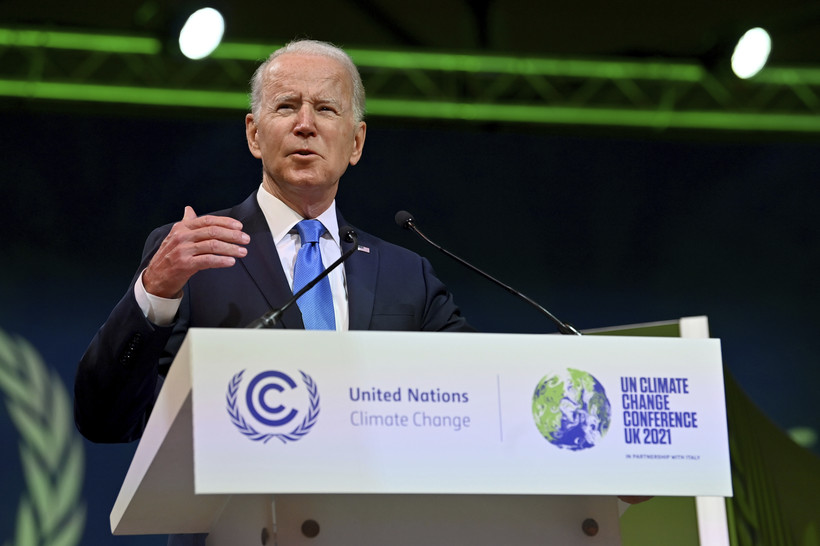 U.S. President Joe Biden speaks during a session on Action on Forests and Land Use, during the UN Climate Change Conference COP26 in Glasgow, Scotland, Tuesday, Nov. 2, 2021. Paul Ellis/AP Photo

The heat is rising on world leaders to tackle climate change as they've been meeting in Scotland this week for the United Nations climate change conference, and Wisconsin scientists and climate activists say global leadership is vital to stave off the worst effects of global warming.

The summit, referred to as COP26, seeks to speed up efforts to drastically cut greenhouse gas emissions and limit global warming to 1.5 degrees Celsius as set out under the Paris Agreement in 2015. In August, a UN panel on climate change issued a "code red for humanity" and warned that temperatures are likely to cross that level of warming in the next decade.

On Monday, Antonio Guterres, the UN’s secretary general, warned that "we are digging our own graves."

"We really do need leadership at a global level. We need people to come together to develop solutions to reduce the amount of climate change we'll be expecting," said Dan Vimont, director of the Nelson Institute Center for Climatic Research at the University of Wisconsin-Madison.

President Joe Biden said the nation will demonstrate that it’s "back at the table" after rejoining the Paris Agreement earlier this year. Biden apologized on Monday for former President Donald Trump’s decision to pull out of the agreement, saying it put the nation "behind the eight ball."

Biden touted the nation’s goal to cut emissions in half from 2005 levels by 2030 and policies to incentivize the clean energy transition that are aimed at reaching net-zero emissions by 2050. And he underscored the human and financial toll of climate change as record flooding, heat, drought and wildfires have become more intense and widespread.

"It’s not a hypothetical threat," said Biden. "It’s destroying people’s lives and livelihoods and doing it every single day."

Wisconsin is already feeling the heat as temperatures have risen around 2 to 3 degrees Fahrenheit since the 1950s. They’re expected to rise another 2.5 to 7.5 degrees by mid-century.

A report by the World Meteorological Organization that will illuminate summit negotiations found extreme weather has become the new normal, and the last seven years are on track to be the warmest on record. Wisconsin has seen more variability with temperatures, according to Ed Hopkins, assistant state climatologist with the Wisconsin State Climatology Office.

"A distinct warming trend is occurring, but we still have times where you throw in an exceptionally cold winter or cold year," said Hopkins. "It's not only the increase in greenhouse gases, but it's also you got to worry about El Niño, La Niña, you know, how the atmosphere changes. You have a whole bunch of things that can influence how the temperatures are here in Wisconsin."

Even so, seven of the state’s top 10 warmest years have occurred in the last 25 years with records dating back to 1895, according to data from NOAA’s National Centers for Environmental Information.

As the climate warms, Vimont notes Wisconsin is set to see more extreme rainfall events and highlighted that the last decade has been the wettest on record for the state.

"You (would) expect to see about a 6 percent increase in extreme rainfall events per degree Celsius of warming," said Vimont. "We've seen a lot more than that."

Average annual rainfall in Wisconsin has gone up 15 percent or 4.5 inches since 1950. And research shows very extreme rainfall events like those in northern Wisconsin in 2012, 2016 and 2018 are most greatly impacted by rising temperatures.

That worries Bayfield resident Bill Bussey since the region has seen tens of millions of dollars in damage to public infrastructure as extreme storms caused massive flooding that washed out major highways.

"We’re going to expect not only more of that, but an increased amount of it if we don't address climate change," said Bussey, volunteer group leader for the Chequamegon Chapter of the Citizens’ Climate Lobby.

For the nation to lead on climate change, Bussey said it’s critical that Congress act on the revamped Build Back Better plan. The $3.5 trillion spending package has been scaled back to $1.75 trillion over the next decade.

The bill would make the single largest investment in addressing climate change by providing $555 billion to transition to a clean energy economy. Republicans oppose the spending package as Democrats are debating what will make it into the final proposal.

Both Bussey and Dan Dieterich of Stevens Point would like to see carbon pricing or a carbon tax included in the reconciliation package. That would put a price on the amount of pollution emitted by fossil fuel producers.

"I'm absolutely convinced that it is only going to get worse unless we take the necessary action. And, to me, that necessary action is to pass a carbon cash back law that would tax fossil fuel companies for the coal, gas and oil that they produce, and then return the proceeds from that tax to the American families," said Dieterich, Wisconsin co-coordinator of the Citizens’ Climate Lobby.

Nations like Canada and Britain have implemented a carbon tax, which is widely supported by economists. A 2019 Brookings Institution report found a $25 per ton carbon tax that rises by 1 percent each year would cut emissions up to 38 percent by 2030.