Jennifer Kilburn drove north on 60th Avenue in Kenosha just before 5 a.m. on Aug. 9, 2018, to start her shift as a nurse at Aurora Medical Center.

As she turned left onto Highway 50, Jesse Liddell flew through a red light, T-boning Kilburn's silver Honda on the driver's side.

Kilburn was taken by Flight for Life — an emergency medical air transport — to Milwaukee. Her pelvis was shattered. Her lung was collapsed. Her diaphragm had ruptured.

The crash was on a Thursday. Kilburn remained unconscious until Saturday. 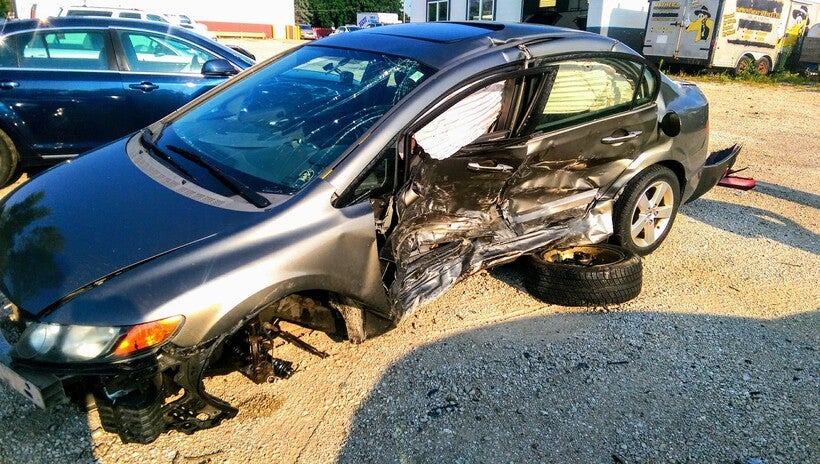 After failing a field sobriety test at the scene of the crash, Liddell was arrested. It was his second arrest in less than three hours. Around 2:20 a.m., Pleasant Prairie police arrested Liddell for his first-ever OWI.

According to a criminal complaint, Liddell’s blood-alcohol concentration (BAC) when he was arrested in Pleasant Prairie was 0.13 percent. When he crashed his car into Kilburn two hours later, it was 0.11 percent. The BAC limit in Wisconsin is 0.08 percent.

Liddell was able to get back behind the wheel after his first arrest because of two Wisconsin laws that state legislators are currently trying to change. 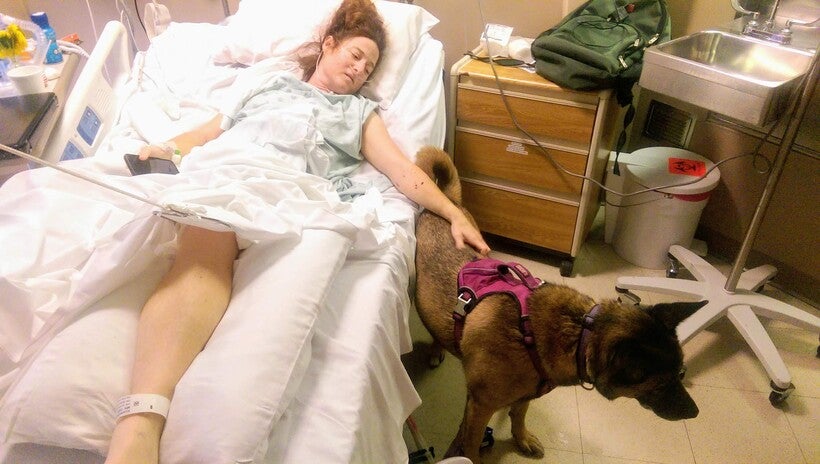 One week after Jennifer Kilburn's car was hit by a drunken driver on the morning of Aug. 9, 2018, her dog visited her in the hospital. Photo courtesy of Jennifer Kilburn

Because the Pleasant Prairie OWI arrest was Liddell's first, it wasn't considered a crime. In Wisconsin, a person's first OWI is treated as a traffic violation.

After an OWI arrest, a person is taken into custody for 12 hours, but they can be released to a responsible adult. Liddell was released to his mother, who promised not to let him drive.

A handful of bills are currently working their way through the state Legislature that would stiffen the penalties for drinking and driving. Among them, is a proposal to criminalize a first OWI as a Class C misdemeanor, which could be punishable with a $500 fine, 30 days in jail or both.

This isn't the first time the idea has been discussed in the Legislature. But it could gain traction this session with a handful of Republican lawmakers supporting change. State Rep. Jim Ott, R-Mequon, and state Sen. Alberta Darling, R-River Hills, introduced the bill and Democratic Gov. Tony Evers has said he is supportive of Ott's work around drinking and driving. 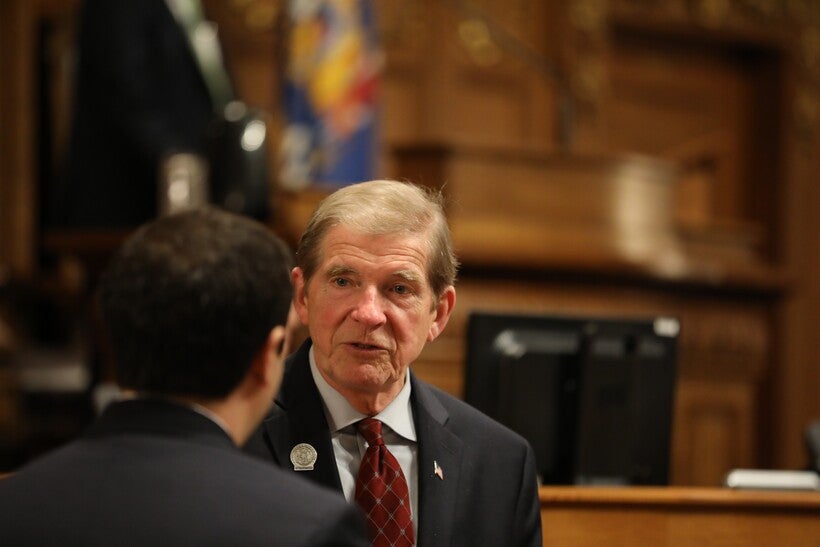 "I think we have to do something different and I'm looking forward to (Ott's) bill," Evers said at a Milwaukee Press Club event in April. "We can't afford to lose lives because of drunk driving in Wisconsin. I'm committed to doing something. Rep. Ott seems to be moving in the right direction to get the support he needs. I support his honest work on this issue and I hope to be able to help him out."

Wisconsin is one of two states that doesn't criminalize drunken driving on the first offense. Neighboring states have much stricter laws. In Minnesota, a first offense is punishable by 90 days in jail and a $1,000 fine. In Illinois, the fine is $2,500 an up to one year in jail.

Both Minnesota and Illinois, and 30 other states, now require a breathalyzer to be installed into a person’s vehicle after they’ve been convicted of drinking and driving.

Changes Ott and Darling are calling for include not allowing offenders to be released from jail until their BAC is 0.04 and a requirement that if a person receives an OWI citation, they have to appear in court to respond to the charge.

Mandatory minimums are also being discussed. If a person kills someone while drinking and driving, Ott wants them to serve a five-year prison sentence. If they've been convicted five or six times for an OWI, Ott and Darling want the fine to be $25,000, up to 10 years in prison, or both. 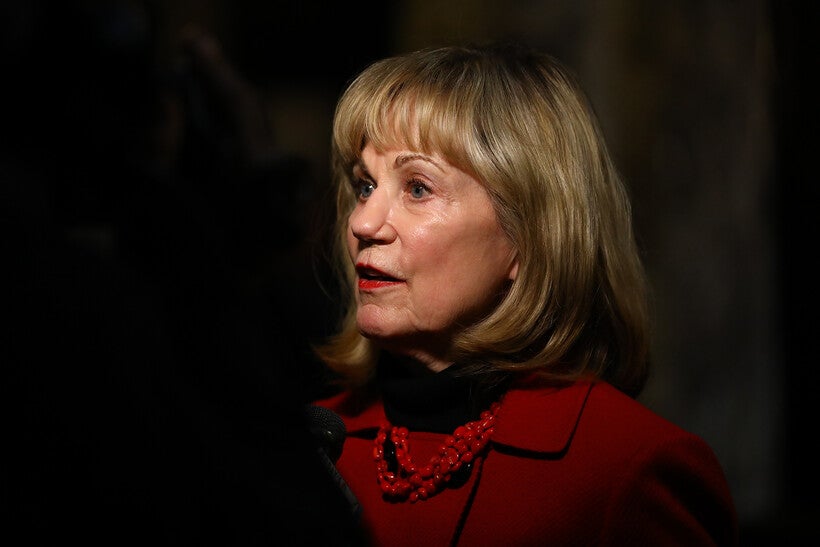 Sen. Alberta Darling, R-River Hills, at the State of the State address at the Capitol in Madison on Jan. 24, 2018. Coburn Dukehart/Wisconsin Center for Investigative Journalism

Still, not everyone agrees that mandatory minimums and criminalizing drunken driving is the right answer.

Jim Haessly has taught a class for first-time OWI offenders at Waukesha County Technical College for 45 years. He said increasing the penalties will flood the court systems and believes better educating people about Wisconsin's laws and potential consequences can have more of an affect.

"These people come in here so hurt," Haessly said. "All of them said, 'I had no clue what happened to people who got a ticket for OWI.'"

Tavern League of Wisconsin lobbyist Scott Stenger agrees. He said while the league didn't oppose Ott’s bills during the last legislative session and doesn't have plans to do so now, the group doesn't believe the bills are the answer to curb drunken driving in Wisconsin.

"We are supportive of anything that can help improve alcohol-related crashes and fatalities," Stenger said. "But there have been a lot of reports — national and federal — that are critical of increased penalties as an effective means of combating drunk driving."

Increasing penalties will cost the state too much money and overburden the court system, which is why there haven't been the votes in the past to pass Ott’s legislation, Stenger said.

"In many cases, we are missing the point here," Stenger said. "Someone who is a repeat offender is an alcoholic. They have a disease and need treatment. It makes sense to engage folks with education, make certain there is treatment, sometimes incarceration is a component." 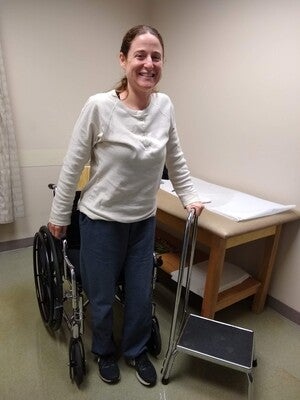 The first time Jennifer Kilburn was able to stand, three months after her car was hit by a drunken driver on the morning of Aug. 9, 2018. Photo courtesy of Jennifer Kilburn

But Ott disagrees. "As far as flooding the court system, you know what, I don't care. If someone commits a crime, they should go before a judge," he said.

"I give a lot of credit to Jim Ott, he's an honorable guy who works very hard and has done a lot of work on this bill over the years," Molepske said. "But what it comes down to is (the Legislature) has to put money into this bill. The bill has never gotten to the floor and the reason is, the fiscal effect is too great."

During her 15 days in the hospital, Kilburn underwent five surgeries. It would be three more months before she could stand on her own. Before the accident, Kilburn, 40, was an avid runner. Doctors tell her she will never run again.

She knows she’s lucky — her spine and head were spared. But she’s also angry.

"I think I’m more angry ... that he was able to get out a second time," Jennifer said. "I think if he would have been held at the jail, that this would not have happened to me."

Correction: An earlier version of this story incorrectly listed Wisconsin as the only state that doesn't criminalize drunken driving on the first offense. According to the National Conference of State Legislatures, New Jersey also treats first offense drunken driving as a traffic violation, but in New Jersey, offenders could be sentenced to jail. The story has been updated.