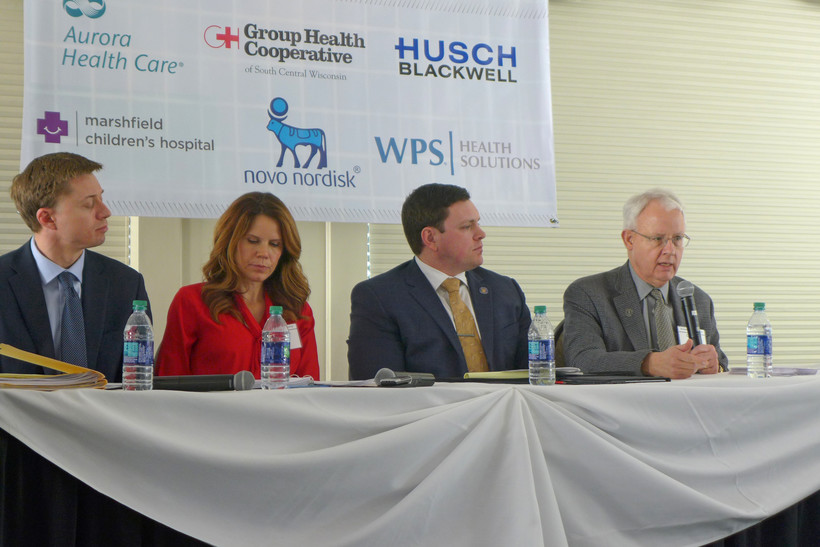 Lawmakers and others debate the health benefits and legality of marijuana at a Wisconsin Health News event Tuesday, Jan. 8, 2019 at the Madison Club in Madison. Shamane Mills/WPR

Legalizing medical marijuana may be gaining ground in public opinion in Wisconsin and around the country, but even with wins at the ballot box it probably won’t be happening anytime soon. The momentum, however, is hard to ignore — even for opponents.

"I think stopping the marijuana reform train is impossible in this country," said Dr. Michael Miller, an addiction psychiatrist at Rogers Memorial Hospital in Oconomowoc and past president of the American Society of Addiction Medicine. "We’ve seen what the public says it wants."

Eighteen referendums related to marijuana were on the ballots in different parts of the state in November. Four were non-binding referendums on recreational marijuana. But the bulk of the advisory questions asked voters whether the state should approve medical marijuana.

"I think our No. 1 responsibility is to alleviate human suffering," said Rep. Chris Taylor, D-Madison, who along with Miller spoke Tuesday at a Wisconsin Health News event at the Madison Club.

While the state doesn’t have medical marijuana per se, lawmakers have approved cannabidiol, a compound in marijuana that does not produce euphoria and which has been helpful in alleviating seizures in small children. Proponents of cannabidiol say it can also be helpful for adults with chronic pain.

CBD oil has taken off, being marketed in everything from hand lotion to beer to energy drinks.

The production and amount of cannabidiol oil, commonly called CBD oil, in products isn’t heavily regulated. Miller said he believes it and medical marijuana should be under the control of the U.S. Food and Drug Administration to ensure it's safe and effective.

CBD oil can be extracted either from marijuana plants or its non-intoxicating cousin, hemp. Sen. Pat Testin, R-Stevens Point, co-authored the bill legalizing hemp. When asked Tuesday about the chances of medical marijuana becoming legal in Wisconsin, he was cautious.

"Politically there are still a lot of hurdles that we have to jump. But I do see from my own perspective an openness to explore options," said Testin, who was on the panel and revealed how a family member smoked marijuana to alleviate symptoms of bone cancer.

Both he and Taylor said medical marijuana might reduce the use of prescription pain pills, which has led to an opioid epidemic.