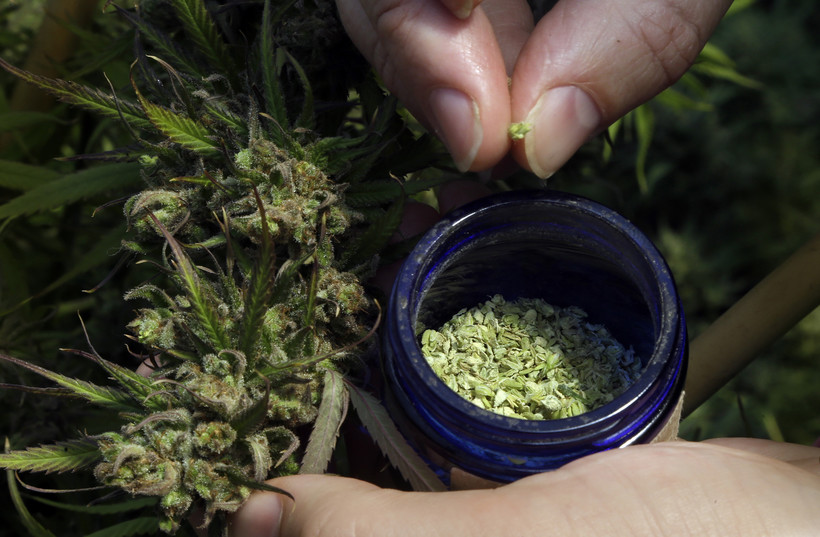 In this April 24, 2018 photo, pollen is removed from a hemp plant at the Unique Botanicals facility in Springfield, Ore. Don Ryan/AP Photo

Cannabidiol, a derivative of industrial hemp, appears to be growing in popularity in Wisconsin for its claimed wellness benefits. In December, a Madison brewing company even launched CBD-infused beer and cocktails.

But despite the countless advertised therapeutic uses of CBD products, quality control can vary and there’s limited scientific research on the compound's use and long-term effects.

CBD can be made into everything from candy to oils to ointments, said James Valona, one of the owners of Verdant, a store that opened last month and sells CBD products in Milwaukee. Valona and other CBD enthusiasts tout the therapeutic benefits of the product, which they say is playing a role in its growing popularity.

"More and more people are talking about it, the effects of CBD are positive on so many people," said Valona.

"Some people are taking it because it’s assisting with sleep, (for) some it assists with pain. Myself, I take it because I have arthritis in my right knee," Valona said, adding that he found relief after two weeks of using CBD.

Joel Peterson is one the owners of Priceland Hemp in Black River Falls, one of the state’s early CBD business adopters. Priceland Hemp farms and processes its CBD on site, Peterson said. He said the company’s products can be found in 20 locations across the state including health and wellness shops, vape shops and a suboxone clinic in Madison where people are being treated for addiction.

Still, the research available on CBD products is limited and there’s little data on the long-term effects of using CBD. But there are new studies and promising data that suggests CBD could aid in preventing addiction relapses.

"We don’t know, I think it’s just the tip of the iceberg when you look at the whole spectrum of what CBD can do," Peterson said.

He said he’s left optimistic by the growing number of CBD studies he sees being published.

According to a National Institutes of Health database, there are at least 100 studies across the world involving CBD that are either recruiting subjects or active — other studies in the database are of an unknown status or have been suspended.

Just this year, the U.S. Food and Drug Administration approved a purified form of CBD oil for patients more than 2 years old suffering from two rare forms of seizures.

Cecilia Hillard is director of the Neuroscience Research Center at the Medical College of Wisconsin. She studies the effects of CBD on the body and brain. While she’s optimistic about what research could reveal about CBD’s medical potential, Hillard said there are some things consumers should be aware of.

"There’s no regulatory agency that’s overlooking (CBD oil’s) purity, its concentration, whether or not there are other things that are present in the oils like pesticides, or molds, or heavy metals and so forth," Hillard said.

Hillard said it’s worth customers asking about the type of testing done to the CBD product when making a purchase.

"Even in a very careful grow operation it’s easy for hemp and cannabis plants for example to get contaminated with mold. Also depending on how it’s grown, (growers) may be using pesticides," she said.

Many retailers agree with Hillard, touting their own labels and laboratory testing.

"(Verdant is) buying from a research program," said Valona who buys his industrial hemp from Kentucky. "Anybody can create CBD, you can grow the plant, you can extract the oil from the seed. It's one of those things that you just have to be careful what you're consuming."

Wisconsin's Industrial Hemp Research Pilot Program is run by the state Department of Agriculture, Trade and Consumer Protection. Growers and processors of industrial hemp have to apply for a license and re-register each growing season. By the end of November, DATCP had 179 new grower applications and 114 processing license applications for 2019.