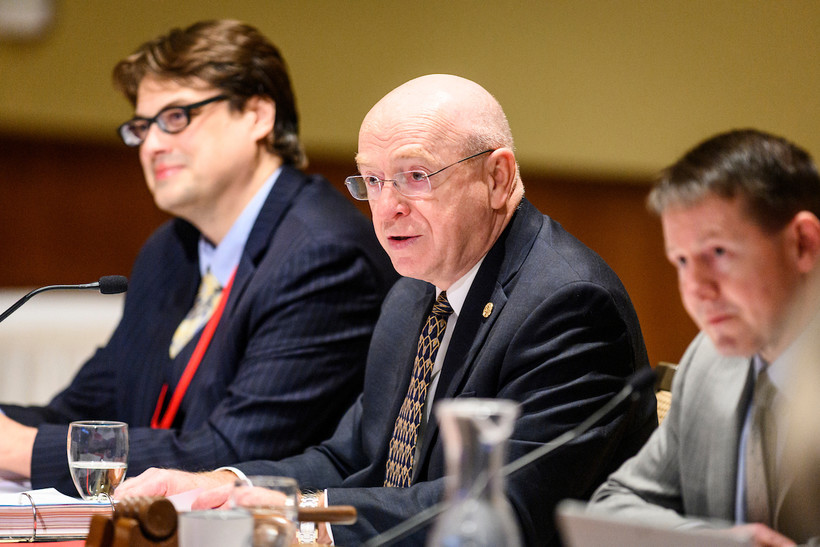 University of Wisconsin System President Ray Cross speaks at a Board of Regents meeting in Madison on Feb. 7, 2019. Bryce Richter/UW-Madison

Faculty and some campus administrators in the University of Wisconsin System are pushing back against a plan outlined by UW President Ray Cross for addressing budget cuts and revenue losses — pushback that has caused Cross to backtrack from his initial timeline for the proposal.

Cross proposes eliminating duplicate major degree programs at most state universities, centralizing administrative functions and creating a unified model for online education in his Blueprint for the University of Wisconsin System Beyond COVID-19.

Cross met with reporters to unveil the sweeping set of recommendations for the UW System on May 6. He said because of declining enrollment, dwindling state support, $212 million in projected COVID-19-related revenue losses and cuts expected in the next biennial budget, universities other than UW-Madison and UW-Milwaukee would have to change the way they educate students.

"So, it begins with accepting the premise that each of our comprehensive institutions cannot continue to be all things to all people and be financially sustainable," said Cross.

The plan called for universities to work on "evaluating and prioritizing programs" by January so UW System administration could decide which to eliminate beginning in fall of 2021. The plan emphasizes focusing on specialized degree programs and avoiding duplicating majors at other campuses.

Cross' plan is the latest in a string of restructuring initiatives over the last three years, both within the UW System and at specific campuses.

A 2017 restructuring initiative from Cross merged two-year colleges with four-year universities. In 2018, UW-Stevens Point Chancellor Bernie Patterson made national news when he called for the elimination of 13 degree programs, most of which were humanities majors, to address a $4.5 million budget deficit. The majors were spared when administrators said they achieved the necessary savings by cutting 44 positions, mainly through attrition.

When news of Cross' proposal broke, faculty members expressed outraged that they weren't consulted in its development. Some, like Mary Bowman, a UW-Stevens Point English professor and University Common Council chair, found it reminiscent of the 2017 restructuring initiative.

"The process is what for me is strikingly similar," said Bowman. "We've got these plans that were largely drafted without input from faculty, staff and students. In this case, I understand it was without input even from the chancellors or provosts. So, very much a top-down plan that was released in the press."

Criticism has come from not just faculty, but chancellors too.

A week after Cross outlined his plan, UW-Eau Claire Chancellor Jim Schmidt sent a campus memo co-authored by shared governance groups, saying that Cross' plan included significant recommendations that "have the potential to significantly and negatively impact" UW-Eau Claire. The memo argued that UW-Eau Claire was not in financial peril, and therefore quick cuts to programming were not needed. It also pushed back against centralization of administrative services and the proposed unified online education model proposed by Cross.

Schmidt declined to comment on the memo or Cross' blueprint plan for this story.

"I do know that it was kind of maybe gutsy," said Anna Ziebell, UW-Eau Claire student body vice president, who helped edit the document. "It's been rare that we've seen, you know, this many people sign off as well as administration on something that has really taken a stance like this."

Ziebell said the most concerning part of the blueprint proposal was the mandate that campuses specialize their missions. She said Schmidt is a believer in the "Power of And," a philosophy that encourages students to explore multiple offerings and "find their passion," instead of focusing narrowly on a career path.

Ziebell said Eau Claire differs from regional campuses like UW-River Falls and UW-Stout, which have specific missions: The River Falls campus is known for agriculture programs, while Stout is the state's only polytechnic university.

"That was definitely something that we were like, 'How would we tailor this when we're already trying to be like a Madison in that sense, but at a smaller level?'" Ziebell asked.

On May 21, UW-Green Bay Chancellor Michael Alexander responded to faculty concerns about Cross' blueprint in a campus update in which he said the plan only included ideas without plans for implementation.

"The best thing we can do as a campus is to control what we can control, which is to do our best to achieve our mission, recruit and retain students, and be good financial stewards of our resources," wrote Alexander.

Cross and members of the UW Board of Regents heard some criticism firsthand at three online listening sessions on the plan, attended by governance representatives and students.

During the sessions, there were calls for campuses to lead the effort, not Cross' office. There was a call to reject the plan outright, and a number of student representatives voiced concern that reducing the offerings at regional universities would limit college access, particularly for low-income students.

In each of the sessions, Cross noted that other colleges and universities outside of Wisconsin are facing steep budget cuts. He also said doing nothing could result in the closure of some UW campuses.

But Cross' tone also seemed to have changed. He began his statements by saying the blueprint was merely a series of ideas from an outgoing president. He also backtracked on his original call for universities to prioritize programs for cuts by January, calling the timeline "way too aggressive."

During the last listening session on May 21, Regent Bob Atwell said that while he had encouraged Cross to offer thoughts before his presidency ended, he wasn't thrilled by how the blueprint plan was introduced.

"I think that the process, as it rolled out at the last regents meeting, was tremendously confusing to a lot of people. Including regents, I might add," said Atwell.

At UW And Elsewhere, Calls For University Restructuring Feel Familiar

UW System Vice President for Academic and Student Affairs Anny Morrobel-Sosa is working with campuses to prioritize majors, and transition to the unified online course model suggested by Cross.

"One of the things that is very clear so far is that people are afraid," Morrobel-Sosa said. "They are afraid of what they do not know."

Morrobel-Sosa suggested that there could be upsides from a plan like Cross'. She said when she was provost at Lehman College of the City University of New York, the school underwent a similar transition. She said after two and a half years, the campus was able to reallocate resources for highly recognized programs while helping struggling programs "move to the next level."

American Council on Education Senior Vice President Terry Hartle said state funding for universities and systems have declined across the nation. But in Wisconsin's case, he said most state campuses face a "perfect storm" of declining state support, a near decade-long freeze on tuition increases for in-state students, and declining enrollment in addition to lost revenues caused by the coronavirus.

"It's sad but true that many people want the benefits of world-class higher education without the necessity of paying for it," said Hartle.

He said much of American higher education is working to find ways to cut costs, and called Cross' plan a thoughtful one.

"Nobody is going to like this particular proposal because it sadly means less higher education," said Hartle. "But I think the system has been placed in the unenviable position of having to have this discussion, whether people want to have it or not."

The blueprint restructuring proposal is now in regents' hands. It will be up to the next system president to decide how or if it is implemented.

On Tuesday, a special committee of regents, ex-regents and campus administrators announced a single finalist in the quest to find a replacement for outgoing president Ray Cross: Jim Johnsen, currently the president of the University of Alaska System.

Johnsen is no stranger to reworking higher education systems in the face of budget cuts. Last week, he discussed options for the University of Alaska System that included ending 50 degree programs across its universities to address declining revenues.