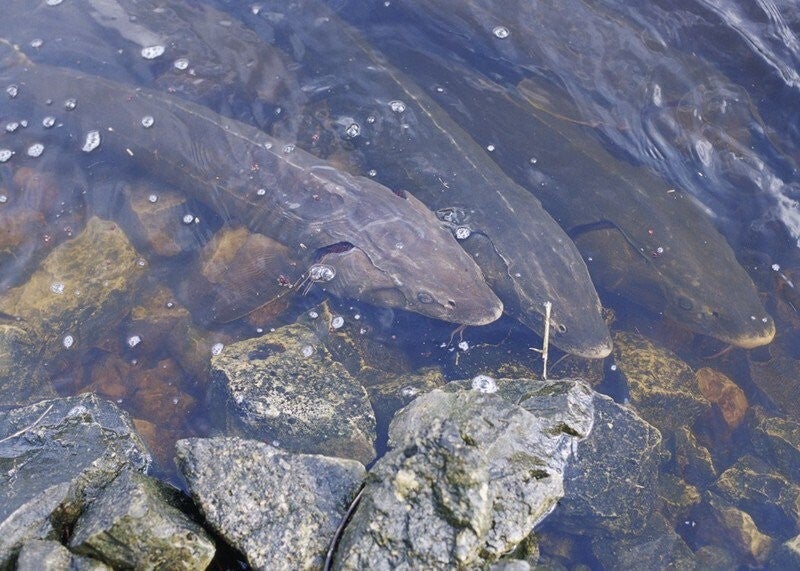 Photo by U.S. Fish and Wildlife Service, courtesy of the Center for Biological Diversity

So Far, 67 Fish Weighing More Than 100 Pounds Have Been Harvested
By Danielle Kaeding
Share:

The sturgeon spearing season hasn’t ended yet, but the harvest on Lake Winnebago is the highest it’s been since 2015.

The Wisconsin Department of Natural Resources reported that 1,297 sturgeon had been speared as of Wednesday on Lake Winnebago. The season started on Feb. 13 and runs for 16 days or until harvest caps have been reached. Deputy Secretary Todd Ambs said the harvest may have been a little lower at the beginning due to a cold opening weekend.

"But, water clarity on Lake Winnebago generally maintained throughout the season right around 12 feet on average," said Ambs. "Spearers have been able to move out deeper in the lake this season while still having the ability to see the bottom."

As of Wednesday, a total of 1,661 sturgeon had been harvested across Lake Winnebago and the Upriver Lakes, which include Butte des Morts, Winneconne, and Poygan. That’s more than double the 811 sturgeon that were harvested on the system last year, according to DNR data.

The sturgeon spearing season on the Upriver Lakes lasted for eight days, yielding a harvest of 364 fish. That’s the biggest harvest since a lottery system went into effect in 2007.

Spearers have harvested 259 juvenile females, 664 adult females and 738 males across the entire system. So far, 67 sturgeon that weigh more than 100 pounds have been speared this season, which is about 4 percent of the total harvest.

"With the spearing effort likely to decrease throughout this week, we anticipate the Lake Winnebago season to last the full 16 days," said Ambs.

Ambs said one spearer harvested the longest male sturgeon on record at 73.1 inches.

He added there have also been some heavy hitters, with four fish harvested so far this season weighing more than 150 pounds. That includes the biggest fish of the year — a 77-inch sturgeon weighing in at 160 pounds.

The heaviest lake sturgeon ever harvested from the Winnebago System was speared in 2010 and weighed in at 212.2 pounds, according to records dating back to 1941.

The DNR sold more than 12,000 licenses for the sturgeon spearing season as the agency implemented a contactless registration system this year due to the pandemic.

Just before the season began, the agency’s sturgeon biologist, Ryan Koenigs, was charged with obstructing a conservation warden’s investigation into an illegal trade of sturgeon caviar. Since then, three Fond du Lac County residents have been charged in the illegal bartering scheme.