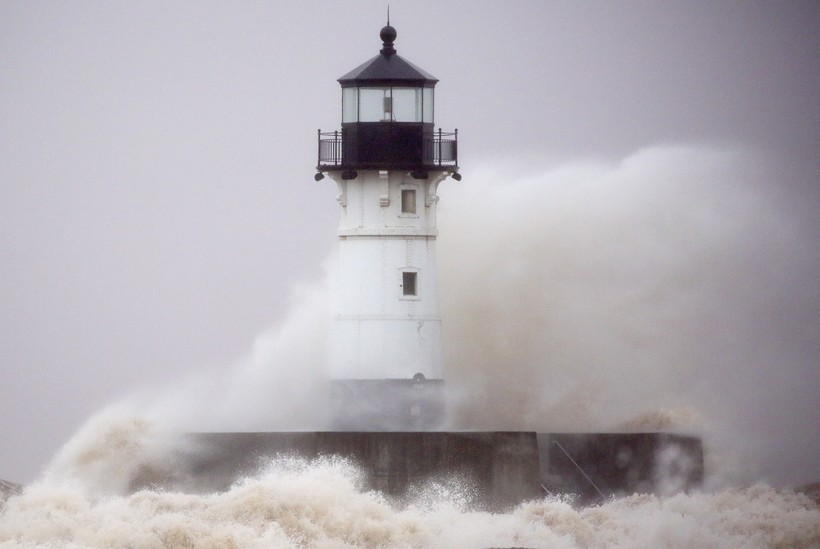 A wave dashes itself into spray against the north pier lighthouse at the Duluth harbor entry on Wednesday morning.

High winds and waves have caused damage and flooding along the Lake Superior shoreline over the last two days with the greatest impacts seen in the Twin Ports. A flood advisory still remained in effect for northern Ashland County on Thursday and communities along the shore continue to feel the effects of extreme weather events.

Joe Moore, meteorologist with the National Weather Service in Duluth, said they received a report from the freighter Algowood of wind gusts as high as 86 mph on Lake Superior about three miles east of Castle Danger on Wednesday.

"We had numerous gusts over 50 miles an hour recorded in the Twin Ports area," said Moore.

The wind sent waves crashing into Duluth’s Canal Park, flooding the waterfront and businesses. Police temporarily closed a portion of the business district Wednesday. The area had already seen $10 million in damage to the lakefront from a storm last fall. Across the border Thursday, public works crews in Superior were cleaning up tree damage and debris from 63 sites across the city. In northern Wisconsin, the wind and waves damaged boat ramps and caused local flooding. Ashland County temporarily closed some roads due to high water. Waves reached up to the foot of the lift bridge in Duluth's Canal Park. Steve Kuchera/Duluth News Tribune

"The combination of high water on these increasingly more frequent wind events are taking a toll," he said. "It’s a challenge for us, and, of course, Duluth and Superior and all around the lake."

Local leaders say the wind and waves didn’t cause as much damage as last October’s storm that shut down U.S. Highway 2 near Ashland, as well as damaged roads and docks along the lakeshore. But, officials are concerned about the impact of more storms, including Scott Kluver, Washburn city administrator. The city of roughly 2,000 is getting ready to repair a roughly $2 million project to the city’s coal dock, which was damaged in last year’s storm.

"If that erosion continues and we have further storms, those sides of the wall may be damaged and lose their integrity and so the entire sheeting around the dock could collapse," said Kluver. "It’s important for us to get this project done as soon as possible so that we have the entire dock structurally sound and it can be protected from further events like that."

The city received around $1.3 million from the state to help fund repairs, but it still had to borrow roughly $400,000 to pay for the project.

In the shoreline town of Herbster, chairwoman Beverly Steele said the town just repaired a road along the lakeshore that was damaged last fall. The town is planning to put down blacktop next spring as part of the roughly $165,000 project.

"When we excavated, we discovered that the town had repaired the thing at least four times because we found four different layers of blacktop," said Steele.

Steele said the town installed large rocks along the road to mitigate any future damage. But, she said erosion from Wednesday’s high wind and waves had undermined parts of the road where it was exposed to the sand. Residents approved an increase in the tax levy to fix the road this year, Steele said.

"If it continues to break, people are going to get tired of repairing it," she said.

In Ashland, the city had also installed $58,000 of riprap along its waterfront trail to mitigate damage, said parks and recreation director Sara Hudson.

The city is also working with the U.S. Environmental Protection Agency, Wisconsin Department of Natural Resources and state Department of Transportation on plans to install green infrastructure along the shoreline and elevate Maslowski Beach about 3 to 5 feet higher. Hudson said the hope is to avoid damage and address health issues with E. coli contamination.

"We are really trying to figure out how we can be more resilient," she said.

Ashland Mayor Deb Lewis said the city is also trying to address issues with sewer overflows into Lake Superior during storms. The city recently received around $2 million in grant money from the U.S. Department of Agriculture for a digital monitoring system to detect leaks in its aging infrastructure.

"It helps us figure out where we need to be focusing our repairs and attention," she said.

In addition, the city is examining an expansion of Ashland's storm water pond to increase its capacity to capture runoff.