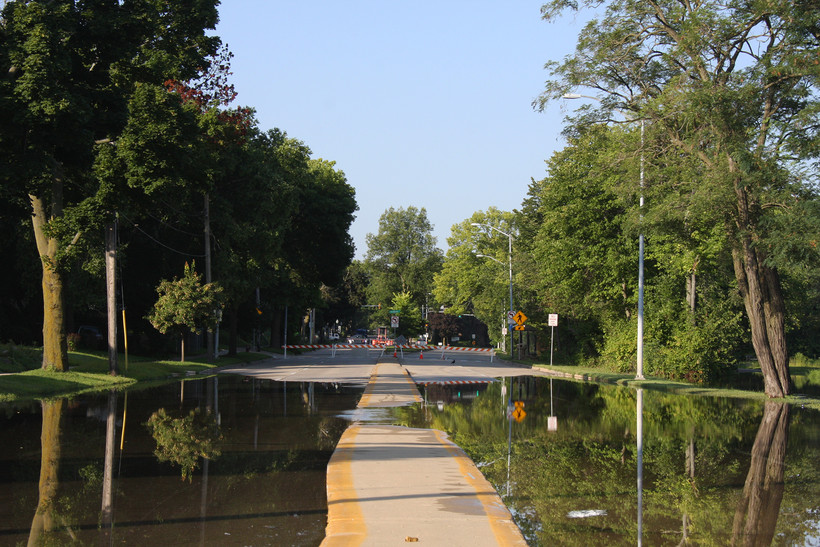 Major Thoroughfares In Madison Closed Due To Rising Floodwater
By WPR Staff
Share:

Flooding earlier this week in Dane County continues to cause problems for residents and commuters.

The city of Madison has closed main arteries and is preparing to close additional roads as lake water levels rise and city and county officials continue to monitor the chain of Yahara Lakes water levels.

According to Phillips, Lake Monona is already at 100-year flood levels, and Lake Mendota is nearing its peak as well.

Phillips added that "Dane County has increased the release rate out of the Tenney Dam to protect the integrity of the dam. Dams have to be protected by managing lake levels; if it were to fail it would have a catastrophic event far worse than we’re experiencing now"

On Wednesday night, the city of Madison released an update on the flooding, urging residents, motorists and people who work in the city to be safe and stay informed.

"With the unprecedented amount of rain that fell this week in Dane County, lake levels are rising and will continue to do so. There is additional rain in the forecast for Friday. City staff are working on alternative traffic plans as the Isthmus travel options are limited," the update reads. "... As water is released from Lake Mendota into the Yahara River and subsequently to Lake Monona, it has little place to go aside from up from storm sewers, and over the banks of the river and lake."

According to the update, city stormwater engineers are working with Dane County and the state Department of Natural Resources to monitor the levels and prepare for what could be to come.

The city of Madison is providing sand and sandbags, closing a city well on the near east side to prevent possible water contamination and preparing detours through the Isthmus. Barricades are also being built.

City officials are urging motorists not to drive through standing water; to park on high ground; and avoid driving to work during peak commuting hours if possible.

"To every extent possible we’d like to encourage businesses to allow their employees to have some type of flex hours because the more you can avoid those hours the better it’s going to be for everybody," said city of Madison traffic engineer Brian Smith.

On Thursday morning, sandbags surrounded the shelter at Tenney Park, which sits along the Yahara River between Lakes Monona and Mendota. The park on Madison's near east side is flooded. The Tenney Park Lock balances the water level of the lakes, as more water from Lake Mendota is released, Tenney Park as well as several streets will continue to flood. Phillips said at the press conference that the Tenney Lock will be opened Thursday afternoon, bringing more water through the Isthmus, and boosting Lake Monona water levels by three inches.

As for boat travel between Lakes Mendota and Monona, the Dane County Land and Water Resources Department announced late Thursday morning the Tenney Lock will be closed Thursday through Sunday because the high water and strong current in the river creates unsafe conditions for passage through the lock, according to the announcement. 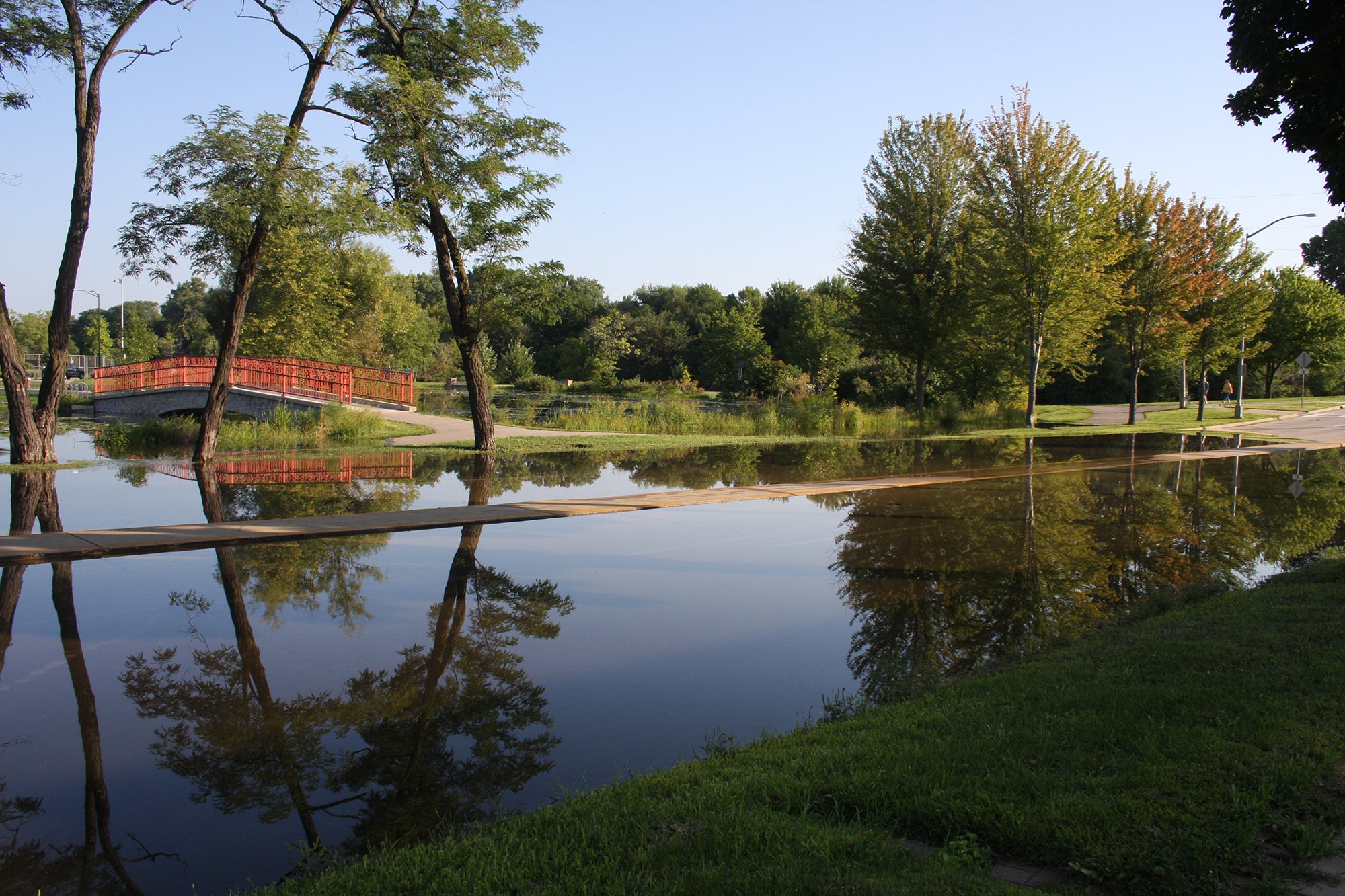 The Tenney Park Lagoon — in between Madison's Lakes Mendota and Monona — spills onto East Johnson Street on the morning of Thursday, Aug. 23, 2018 after near record flooding Monday, Aug. 20, 2018. Jenny Peek/WPR

More than 11 inches of rain fell Monday night through Tuesday in the area, according to the National Weather Service.

On Wednesday afternoon, Dane County Emergency Management began urging communities along the chain of Yahara Lakes to be prepared for flooding. Emergency managers said the levels on the Yahara Lakes have been steadily increasing since the heavy rain fall.

Downstream of Lake Mendota, the levels are expected to continue to go up. As of Wednesday afternoon, officials predicted the levels could rise another 3 to 6 inches in the next 24 hours in places along Lake Monona, Lake Waubesa and Lake Kegonsa.

A slow-no-wake restriction remains in effect for Lakes Mendota, Monona and Waubesa.

The city of Monona and Town of Dunn may also experience flooding in the next few days. Some state highways remain closed, including Highway 14 from Middleton to Black Earth.

Gov. Scott Walker viewed flood damage in Dane County from the air on Wednesday and plans to view it on the ground on Thursday. Walker has declared a state of emergency in the flood-stricken county.

The deluge of rain on Monday prompted evacuations and left at least one person dead in the county.

For up-to-date information on road closures, visit the cityofMadison.com/flooding. 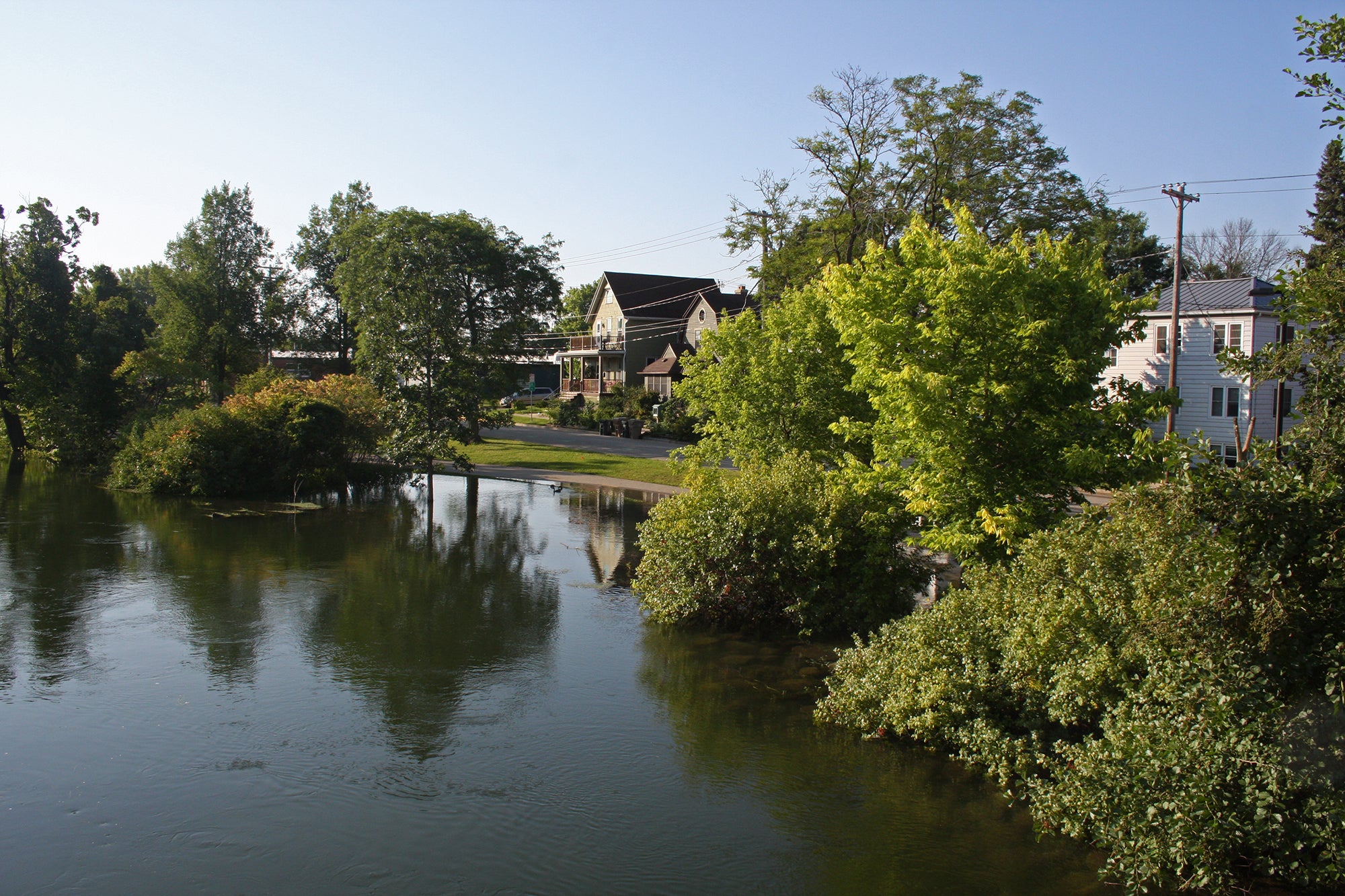 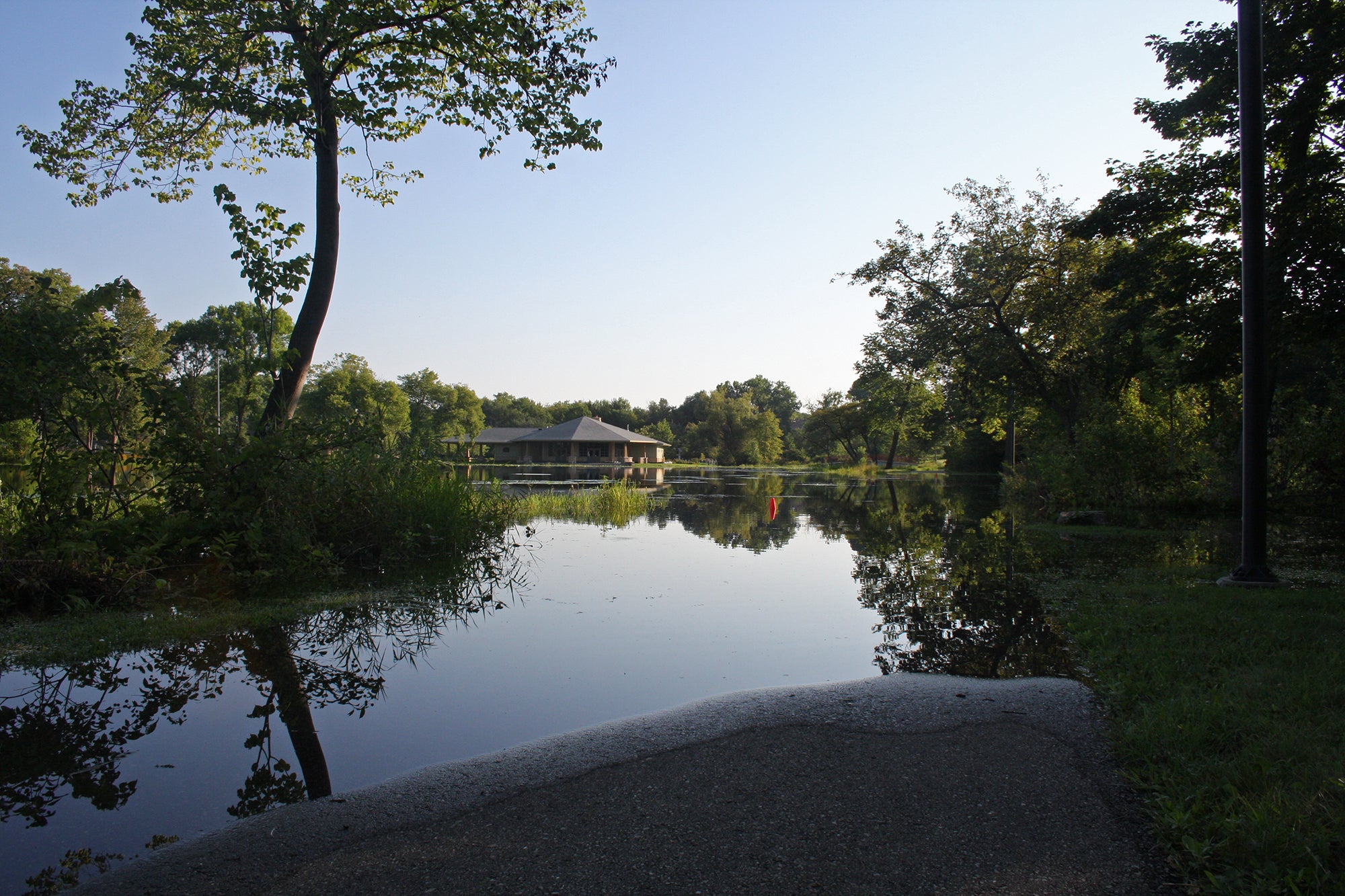 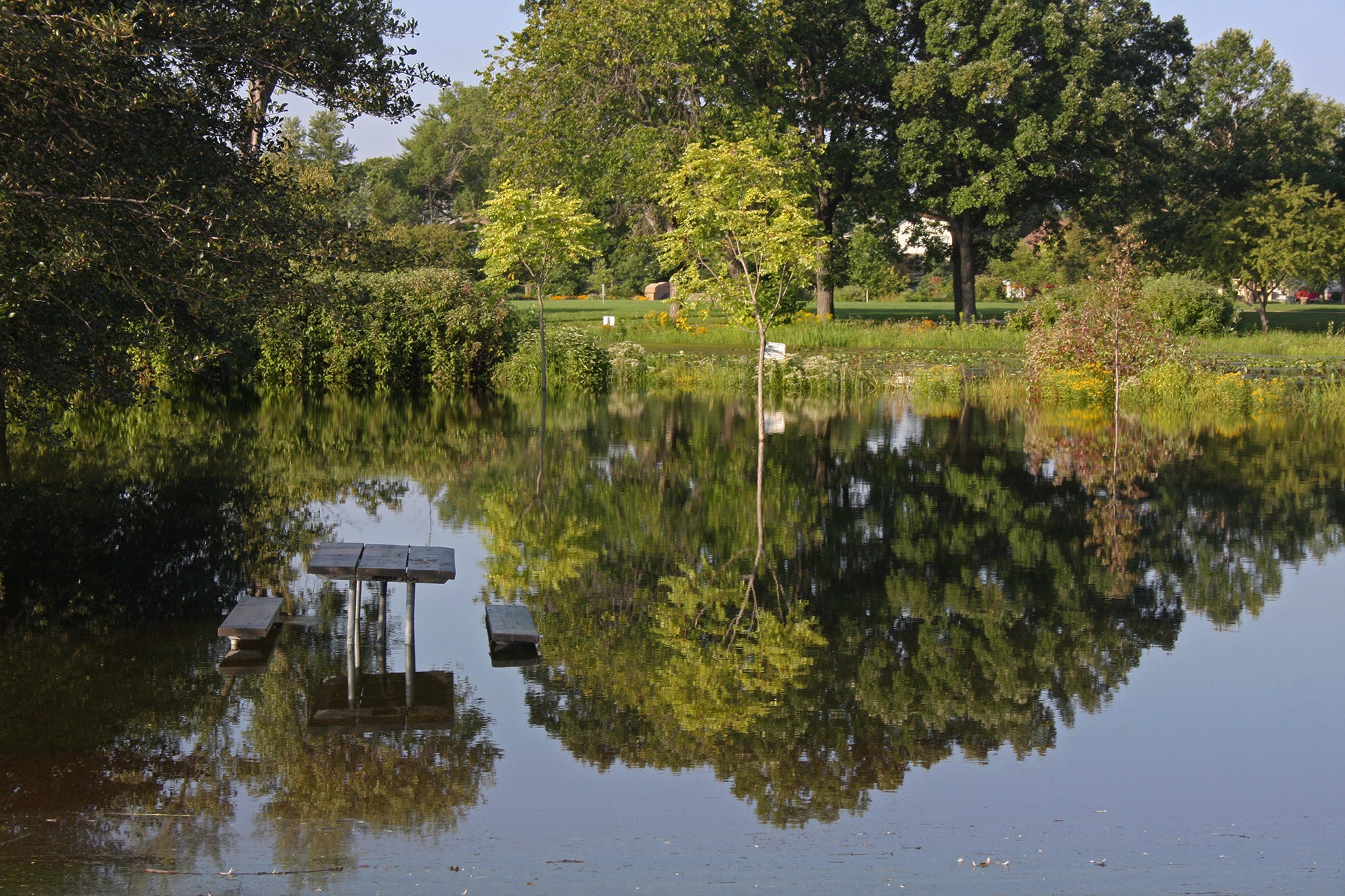 On Thursday, Aug. 23, 2018, the Yahara River in Madison overflows its banks into Tenney Park after heavy rainfall and flooding. Jenny Peek/WPR

Editor's note: This story was last updated at 3:45 p.m. Thursday, Aug. 23, 2018 with information from a city of Madison press conference. Jenny Peek, Andrea Anderson and Shamane Mills contributed. Content from The Associated Press was used in this report.